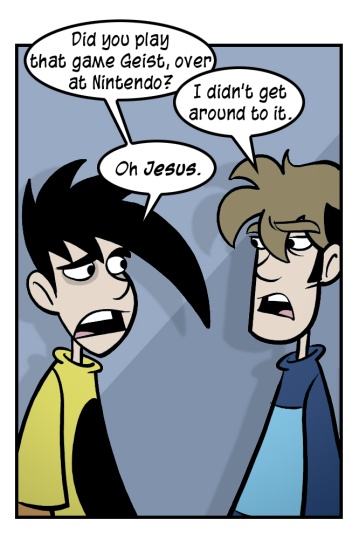 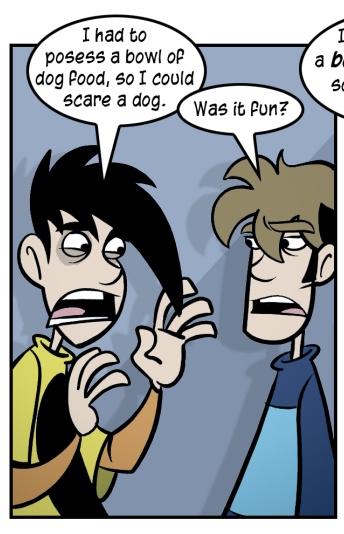 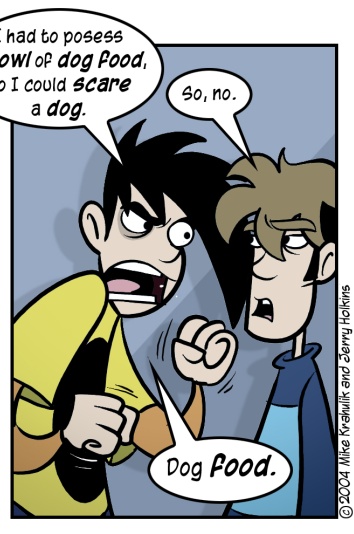 I feel like I need to emphasize that the strip does not exaggerate the game in question or add things where things do not exist. You really do "possess" a bowl of dog food in an effort to terrify a dog, which can then be possessed itself in that state - indeed, there are more than four hundred breeds of dog, each with their own statistics, which makes Geist the Gran Turismo of dog scaring.

One of the weird things about Penny Arcade trying to cover E3 is that - precisely because I enjoy video games - I actively avoid some of them because there are things I don't want to know. To go to a media event whose explicit function is the dissemination of information and then spend days cowering from it is something truly ridiculous, but I really would like some gaming event in the next two years to have some bit of novelty associated with it. So, for example, all I could tell you about Thief: Deadly Shadows is that a) I'm happy the franchise did not disintegrate, and b) there really is the most fetching graphical effect when Garret is in the dark, which we can assume will be often. When he's illuminated, it's like "Hey, there's a thief," but in the dark they have chosen just to accent just the edges of cloth and leather with a tasteful, almost illustrated glow, like moonlight. Let me scare up a screenshot for you, though you really do need to see it move. I'm fairly excited for this game, but it's not really based on anything since I've sworn off real knowledge about it. I even look forward to the ability to play in third person, which I understand is somewhat heretical.

What I saw of Freedom Force vs. The Third Reich was alright, and their whispered intimations about a wholly new type of multiplayer storyline-based gameplay was invigorating, but I might have been hoping for a more significant visual leap. I don't mean pixel shaders or something, I'm saying that they have a wonderful, compelling cast of genuine characters and a naive world on the brink that I want to see better realized. They are moving to Gamebryo, a new version of their engine, the effects of which we weren't able to see - but I'm not really talking about technology, I'm talking about aesthetics. The inspired art that drew me into the game in the first place only gets seen in loading screens, and then crude facsimiles of those characters take their place in the game world. This was fine when the first Freedom Force hit, with a magical quality that seized our minds. I hope you'll forgive me when I say it's time for the series to make good on its artistic promise.

From the story outline we were given - and a wonderfully melodramatic new origin movie for newcomer Nathan Graves, a.k.a Tombstone - we'll be well served, which is exactly what I expect from Irrational. The levels will be more dense with interactive objects, as well as that dynamic lighting the kids are always talking about. Modifications and custom content will be automagically packaged and sent to opponents or comrades. Cool new powers and new progressions for old characters are in. Visually, though, it doesn't feel like a sequel should. Maybe I'm not being fair, but Freedom Force is one of my pet franchises and I'm allowed to be partial.

Speaking of another Irrational game - Tribes: Vengeance - I walked up a steel staircase and played it a bit as well, but my experience - hitchy vehicle control, poor prediction on the LAN, things like that - isn't something I've seen echoed from other quarters. It is because of this that I've decided to do something drastic, something that may well change the face of history. I am turning to Tribal War - yes, Tribal War, our eternal enemy - for their take on it. They go map by map, weapon by weapon, and deliver a fairly exhaustive chunk of coverage that will likely answer your questions, as much as it may pain me to admit it.

did i do all that i could