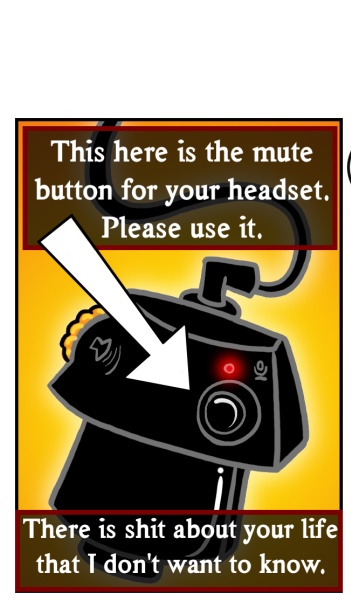 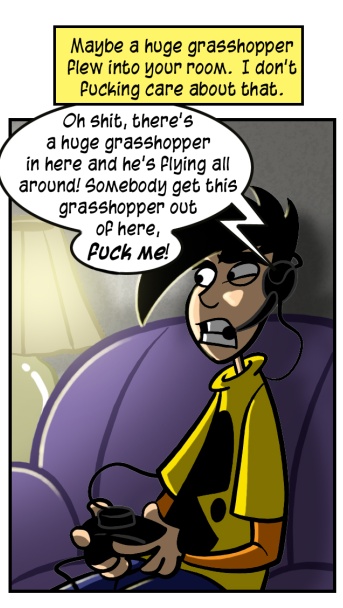 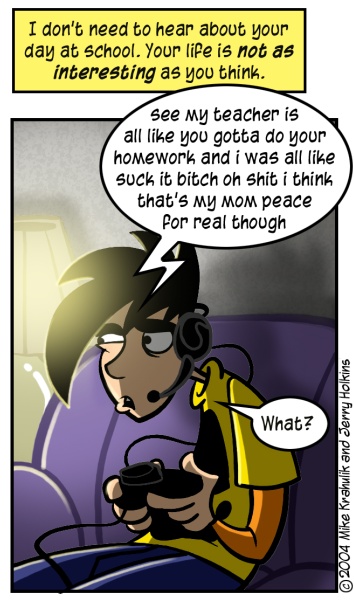 Both stories in this strip are true, true, true. There was even a time when another player took an opportunity between rounds to strike his girlfriend, producing a haunting crack and a yip, but it was difficult to find the joke in it.

I've taken many opportunities to ridicule Fable over the years, largely because I thought it would never actually appear, so it was like making fun of a mythological creature and not really a source of danger. As a result, I haven't taken any time the last few years to hear the appointment-only hyperbolic manifestos that have accompanied the game since it was announced. So, seeing Fable playable out on the floor was like seeing a row of systems, and then a waving dragon, and then another row of systems on the other side. What I played - which is to say, what they chose to show me - was extremely good. Last year was the Year of "X" May Cry, as game after game and developer after developer laid claim to the high-speed, cinematic combat of Devil May Cry. This year was definitely The Year Of The Glow, as soft light permeated many of the games present. Fable really owns it, though - its peculiar, attractive aesthetic absolutely lends itself to a sort of grim fairy tale, which I must admit they have nailed spot on. The combat I was able to play was action oriented, but it was not so fast paced that it got away from you or that each button press lost meaning. Plenty of videos available at the MS site for it, if you'd like to learn more.

To see E3 close down is really a sight, as the moment the clock strikes men emerge from shadow and dismantle the entire affair instantaneously. Everything - as you are walking out, a man will literally be pulling the rug out from under your feet. It was in this disintegrating state that we entered the small, private Bethesda booth, and since these people were all busy tearing their room apart I could walk right into the back unhindered. I slinked to the back of their room, snatching up an Xbox gamepad and blindly navigating the menus of Call Of Cthulhu: Dark Corners Of The Earth. I was lucky to have found the guys that showed me the game last year, two foreigners, and since we already sort of understood where the other was at I was able to see it pretty quickly. The presentation they gave was almost identical to the one I'd seen before, actually - save one major thing: a vastly improved engine. Before, I saw an eviscerated man kept alive via unnatural means and it certainly seemed uncomfortable for him. Now, the entire affair was completely disgusting, glistening, and gross. Other scenes I'd witnessed before took on convincing light and particle effects that cemented the otherworldy nature of the events, and in a game whose entire role is to provide a convincing look at surreal entities it needs to have the reality down-pat first - their new technology lets them do that. The vile Shoggoth gleamed with unseemly moisture, and the factory that surrounded him looked very much as it should, which is what makes it work. It is really like an adventure game played in the first person, and while gunplay is certainly possible it's really not a focus. We had a chance to see some of the insanity effects in play, warping and blurring vision. I thought this might actually hinder gameplay, and I told them so, and they remarked that they were turned up somewhat for the demo just to emphasize them - in actual play, they'll be a bit more tasteful and cinematic than what I saw. The eventual result of massive sanity loss is actually suicide - a chilling animation to see in first person, I can tell you, as the barrel of the pistol is raised to your temple.

Fans of the Mythos, never fear - their first allegiance is to Howard Phillips Lovecraft, perhaps even to their detriment. This is a game for fans of his surreal horror that is so genuine I'm not sure it would take hold in the larger gaming community.

Speaking of Xbox games, two exclusives hit retail today: Chronicles of Riddick, which we discussed on Monday and is apparently the second coming of Christ, and Full Spectrum Warrior, which I have praised to the skies since seeing it last year. It has thus far received extremely favorable reviews, but here at this late hour I'm trying to guard my optimism a bit. I've been so enthusiastic for so long that no human endeavor could possibly warrant it.

imagine you whispered a secret