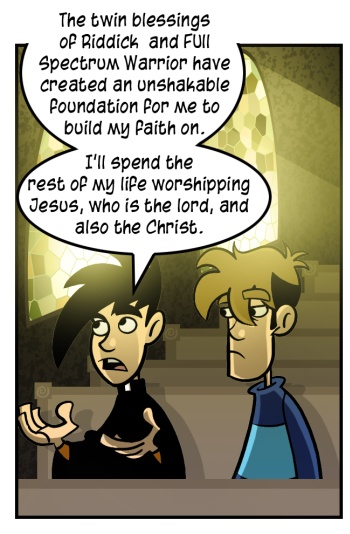 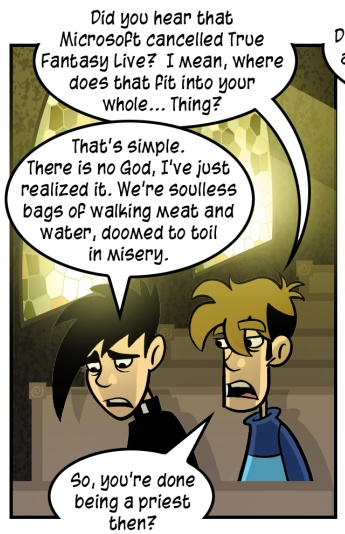 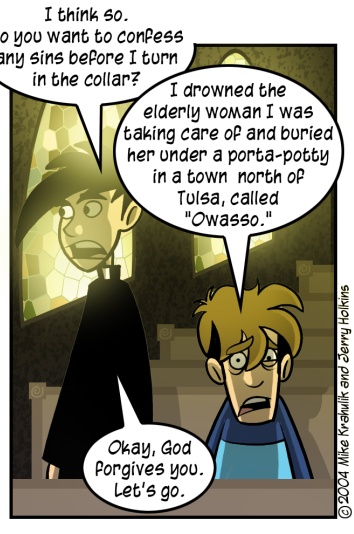 It's never me that suggests comics with religious overtones, the big bad atheist, oh no - it's Gabriel, the "Catholic"! But of course, it's up to me to answer all the nasty mail about it, when I'm as uncomfortable discussing religion as I am discussing fallopian tubes, or some other byzantine feminine machinery. It's like when, completely without input from me, he puts a link to a kind of mercenary evangelical site on a pedophile's shirt and then I'm supposed to explain the heathen purpose of that to a throng of angry believers. Was he trying to say that Christians are pedophiles? You've read his posts. Does subtlety really strike you as his thing? If he wanted to conflate religion and pedophilia, trust me - you would catch the meaning.

On the other hand, even as a Godless pagan, getting Riddick and Full Spectrum Warrior on the same day does seem to imply a greater framework of benevolence than could be managed by finite beings. Finite is actually a good word to describe the games in question. I'm going to stick with it. Neither of these games overstays their welcome, which is a polite way of saying that they are short.

When it comes to Chronicles of Riddick, this Escape from Butcher Bay thing, I really do have to throw in with the large body of reviewers on this one. It is not absolute bliss, after reading their accounts I expected to be transported to a land which knows not care nor worry. But it is very, very good.

It's interesting that the game should hit immediately after our extended discussion on the abysmal quality of many licensed titles, as it is almost like a visual aid to help elucidate the way forward. These are the things the game establishes: First, the title should be used to add contour and gradient to the existing property - not merely repackage the film plus interactivity. That's a pretty important distinction, how the license can inherently break the simulation. If my only two choices are to a) continue the preordained story from the movie or b) die, those don't actually count as choices. You have a single choice and the consequences of making that choice. If being interactive means that my decisions are relevant, in the context of a movie narrative - a kind of discrete, linear destiny - in real terms, volition is nonexistent.

So, Riddick sidesteps that by being a prequel that details important developments in the character. The second lesson is that voice talent needs to be of even quality. I don't even want to think about how many janitors or friends of the producer I've had to tolerate in games, busting right through even the best ones and forcibly ejecting me from a more pure translation into the experience. I'd imagine it's the "Universal" part of Vivendi Universal that helped the most with this, but this thing has some of the most pristine voice work to date. Make a note of it: actors pretend to be other people as their job. And if you want to see just how much a voice can bridge that wide span between a 3D model and a human being, go rent The Chronicles of Riddick.

So, original story, don't skimp on the voices. These aren't bad things for any game, but when we're talking about converting a cinematic property they're critical. Riddick throws in something that isn't, in my opinion, necessary - but when added to the other two creates the startled look you see on these reviewers. It has flashes of technical brilliance. This is the sort of graphical presentation we should be expecting at this point. They aren't next generation graphics, even - it's the way this generation should look, and Farcry is the only other game that comes to mind which really presents the argument for modern hardware. The game isn't long enough for the honeymoon period to be over, even by the end you'll still be marvelling at just how immersive an environment can be when its surfaces capture and reflect light properly.

We've reached the last paragraph, which is where I traditionally say the bad things and then tell you not to worry about them. The level design is very much of the Quake school, corridors aplenty, crates, and so on. I do not find it particularly bold or inspired, though I guess you are in a prison. We've come to expect a bit more from games geometry wise, but I think you'll find yourself able to forgive it - the pacing is right, the hand-to-hand combat is visceral. It's a fun game that I can recommend with absolutely no remorse.

i'm so lonesome i could die