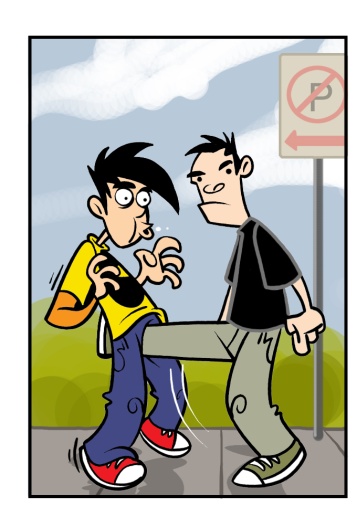 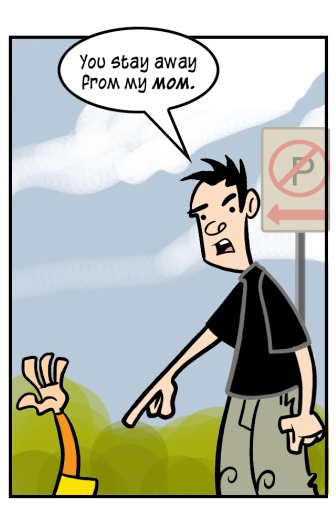 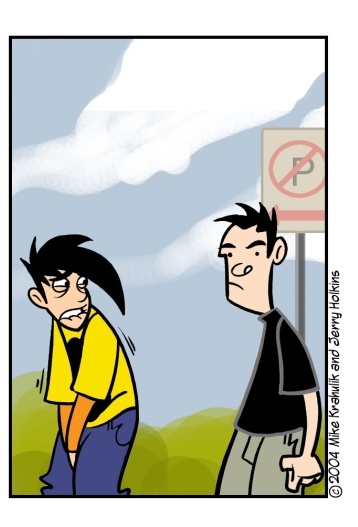 I'm just afraid that Gabe will learn the wrong lesson from this experience. He'll come away from it with a fear of shrubs or young men when all that's required is that he be more circumspect regarding his dalliances.

Has the entire Goddamn universe become snared by the siren song of City of Heroes? Everywhere I look, monitors glow with bobbing superhero ass. I played it, and it was great at what it did - Diablo plus Unprecedented Character Creation. I declared it inoffensive and moved on. And now, I'd say eighty percent of my friends can't pry themselves from that superteat.

It's freaking me out. I didn't bite on the initial run because I felt like I wouldn't be missing much, but even Doug - who went to college, and usually doesn't deign to play anything real-time - he's in there punching guys or jumping on buildings or whatever. Shit, now Scott's in there, may God curse him for a thousand years, and it caused him to crack out some of his best strips. Now it's like some kind of humor Arms Race. I need City of Heroes for the raw materials alone.

I'm just trying to figure out what seized all my friends so, it's literally an epidemic. Clearly, massaging a unique character out of their generator gives you an enduring impetus to rock villains. You want this proxy entity to scour the streets with purpose and conviction. I've seen people play it a lot, I can visit practically any person I know and watch this fucker, and it seems as though quite a few among our number actually play this with their girlfriends. I know - invigorating. We rarely receive the imprimatur of our loved ones where games are concerned. But the combination of a slick interface, a highly custom character, and the fact that even new characters are pretty dangerous just makes it accessible in a way that other genre entries - and indeed, most games - are not. You can solo and actually enjoy it. Making supergroups is fun, complete with custom color schemes - but you can group up in other games, that's always been great. What's a bit different is that the encounters in CoH tend to be versus other groups - not other players, that doesn't come until the expansion - but balanced groups of opponents. When your crew rushes in, there's actually something really useful for everybody to do, and since there's like six guys over there you feel pretty productive when you lay them out. There's no crafting, which makes my heart weep - comics are replete with genius inventors of every kind. I'm strong, though, and I'll find a way to go on.

Now, see, their new features update is up on the test server, and I'm going to want some high level bad-ass named Al-Hazred or whatever to deal with the influx of evildoers from the City of Villains expansion... I've got over a hundred people asking for my name and the server I'm sworn to protect... Also, I have no self control and I repeatedly go back on my word. I guess I'll see you in there.

to fall down at your door