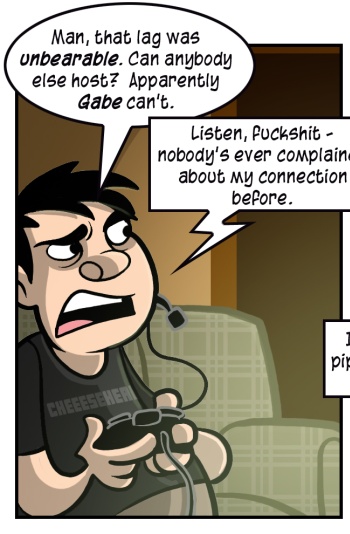 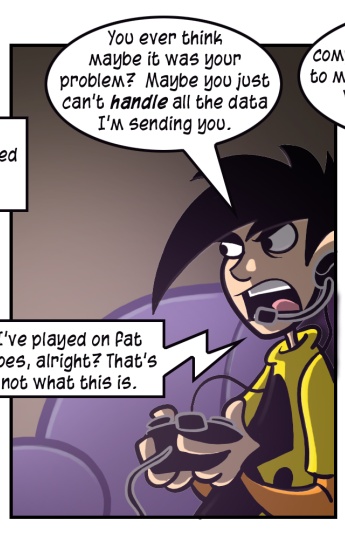 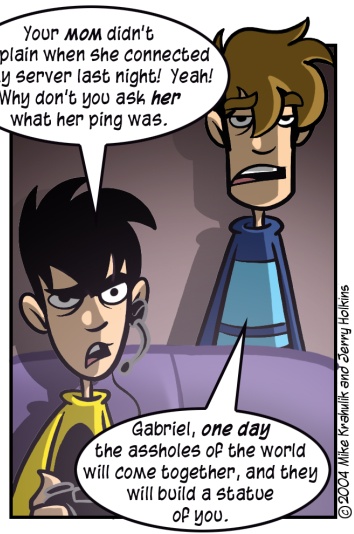 When another man questions your throughput, I mean, it's on. Driving music begins to play and you have to use your crane kick.

As I suggested on Friday, today we will be talking about Thief.

Eidos chose to call the game Thief: Deadly Shadows for some reason, maybe there's some kind of market research that says casual gamers get scared when they haven't played the earlier games in a series. Well, that's all well and good, I've finished it and I can tell you the real deal. There can be no doubt that this is not only a true sequel to the Thief franchise, but is also the last game in a discrete trilogy that bookends the series and even suggests a way forward. Like Call of Cthulhu: Dark Corners of the Earth, it actively services its devoted fans with no regard for the consequences it may suffer at retail.

I should tell you that it was the PC version that I played through, as I felt going for the Xbox ver would have compromised my principles. Third person is one thing, I'll get to that in a second. The Thief series seems emblematic to me of gaming on personal computers, the way it once was - interesting, clever games that appeal to a niche audience. Also, it helped my decision quite a bit that the big sites would just post one review for the Xbox and PC versions, same text, but the Xbox version would get a lower score. For someone who purports to discard their assertions outright, I'm terribly beholden to these assessments.

Thief is the best game I've played this year. I do believe, having seen everything in there, that the clock was running out by the end and they had to make the best of a bad situation - that, or the publisher was not terribly diligent when examining release candidates. In addition, the cinemas have an odd, uneven quality that I found a bit jarring, but it hardly made me uninstall the game. It's just that when you have a game like this, with so much good showing, the half-way stuff really pops. Properly tuned, I think that Thief belongs with MGS or Splinter Cell as a perfectly valid expression of sneaking gameplay - but it's going to take more than my say so to make a publisher believe that.

As I suggested on Friday there is a confirmed bug in the A.I., and a patch on the way. Since most of the games we play as adherents to the medium are animated by completely inane artificial intelligence, it should be emphasized that the way guards and other Unnamed Beings react to their environments could almost be called the entire game. I'm fairly certain that people who got the game for the Xbox are screwed in this regard. Games do get "patched," as much as Microsoft might not want to call it that, but those games typically have pronounced online components to begin with. On the PC, there are some fan-made trainers that are up to the task in the interim.

I have to be honest, though - I play Thief games for the stories. Me sneaking around the castle undetected and the guards being hamstrung by their AI routines, I mean, that's pretty much the same thing to me. It's easy to call this one of the best worlds that is wholly native to videogames, with its steampunk trappings, its warring factions, its odd dialects, and its eminently likable protagonist. I think there was a fear that Thief III would, with its simultaneous console development, suffer for it - occupying some twilight world somewhere between two finished games. There's only one facet of the game in which this emerges, and that is with the Zoning in the game - individual missions and even the town hub are fragmented into a number of separate areas to accommodate the memory restrictions on the Xbox, which is really unfortunate for PC users with a half-gig or more of RAM. I read something somewhere about load times being poor, which is just exacerbated by this problem - I wouldn't know. I've been running SATA RAID since Uru, and I have no intention of being without it ever again.

You could call the addition of a third person mode a console concession as well, but I think it's a great addition - particularly if Garrett is going to look this cool. I mentioned once that the ambient light of a given scene would highlight the edges of the character to keep him visible, and I never got tired of this effect even after marathon 12 hour sessions. I found myself switching back and forth actually, using both views in concert. Something else you should know about Thief III: it has Eric Brosius on audio, which is the same person that did not only the previous games but also System Shock 2, whose audio alone was able to give me a nervous breakdown. I'm not making a joke, I'll tell you about it sometime if you want - it was horrible. At any rate, he's at the top of his fucking game. I used third person to bleed off the tension in a level about three quarters of the way through the game, I don't want to give anything away, so I won't name it. But let me tell you that I was desperate with terror on more than one occasion, and I could not bear to be in first person mode. Name the last game where that happened.

I rarely do this kind of thing, but I really do want to throw my support behind this editor petition. Sites like Thief Underground and The Circle host fan-made missions for the earlier games, they're essentially mods that - because of the affection gamers have towards the series - have the care and feel of fan fiction.

is this all there is