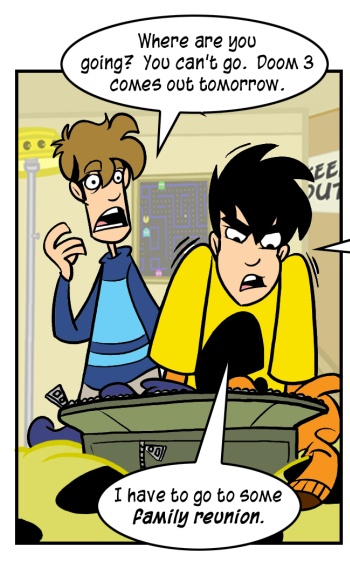 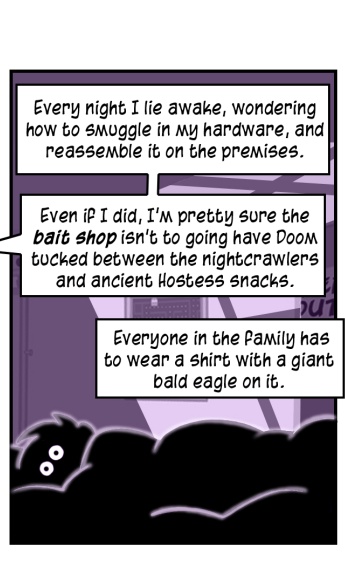 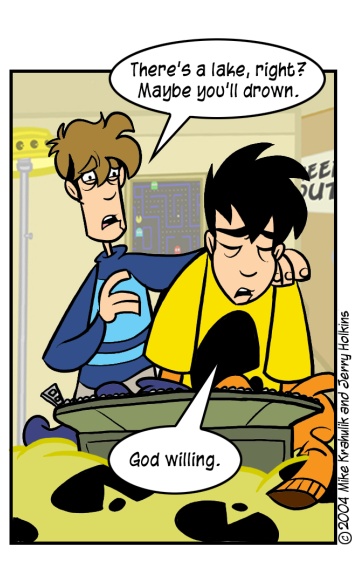 We could not have made up the special Bald Eagle Family T-Shirts, we simply don't have the ability to conjure an image of that power. Everything in this strip is quite true, Doom is coming out, country bait stores rarely carry software, and I desperately hope that Gabriel dies in water. Please say a silent prayer for Gabriel as he endures this week. Special Alternate Task For Atheists: Deny your maker.

A large part of why my marriage functions is that I rarely see the person I'm married to, and if we do see each other we're too exhausted to fight about anything. You might think this has nothing to do with gaming or geekery, when it is in actuality the core of what makes my life possible. I'm often asked how I find the time to play the games I talk about, and it's really very simple. I'm emotionally inaccessible to my life partner.

In the Monster Manual, she and I have different Activity Cycles that overlap slightly in the evening, during which time we consume a DVD in strained silence. This scenario is maintained by two cardinal rules which must be upheld at all costs, lest genuine dialogue occur.

1. She must never be exposed to any household tasks involving Cat Shit.

2. All gaming must be accomplished with the use of headphones.

The first one is easy enough. The second one had a single exception, the Xbox in the living room, until Crimson Skies was released. You and I are quite used to repetitive cues being broadcast to us constantly, we can derive the information - which side has the flag, let's say - without consciously processing each statement. Not so for her, and the fortieth time she heard that the "Blue Team" had "Dropped The Booty," it created a conflict that I was sure would result in the dissolution of our union. I was able to resolve this particular issue via the X2VGA converter, and we were able to resume our prior arrangement, but for a time we were dangerously proximate to true self-analysis.

Since I am free to play games so long as they do not project in the the audible realm, I had always assumed that this precluded any access to more advanced Sound Configurations, such as the elusive 5.1 that has become more and more prevalent. I can recall the day in 2000 when I discovered that a common pair of headphones could be made to emulate positional audio, quite the revelation at the time, like discovering that your penis is also a magic wand. Hearing word that there were actually wearable 5.1 audio setups was just as startling. There are a few options in this space, but Zalman - makers of those odd "flower" cooling mechanisms and that silent, fan-free case - have a solution of this sort that should arrive today. I'll let you know how it goes.

We just finished a new long-form project, think the PA Presents stuff, for Gearbox Software's Brothers In Arms. We had an unprecedented level of access to the developer of this game, and by unprecedented access I mean that there is a far greater degree of integration between our work and the game itself. Not only did we have access to hundreds of megabytes of what your teacher would have called "Primary Sources," the guys over there have been doing research of various kinds for as many as three years and were happy to talk to us whenever we had a question. The execution of this one has absolutely nothing in common with our prior work of this type - it's far more intimate. If we have done our jobs correctly - and I believe that we have - there will be nothing, visually or stylistically, to reveal it as our work.