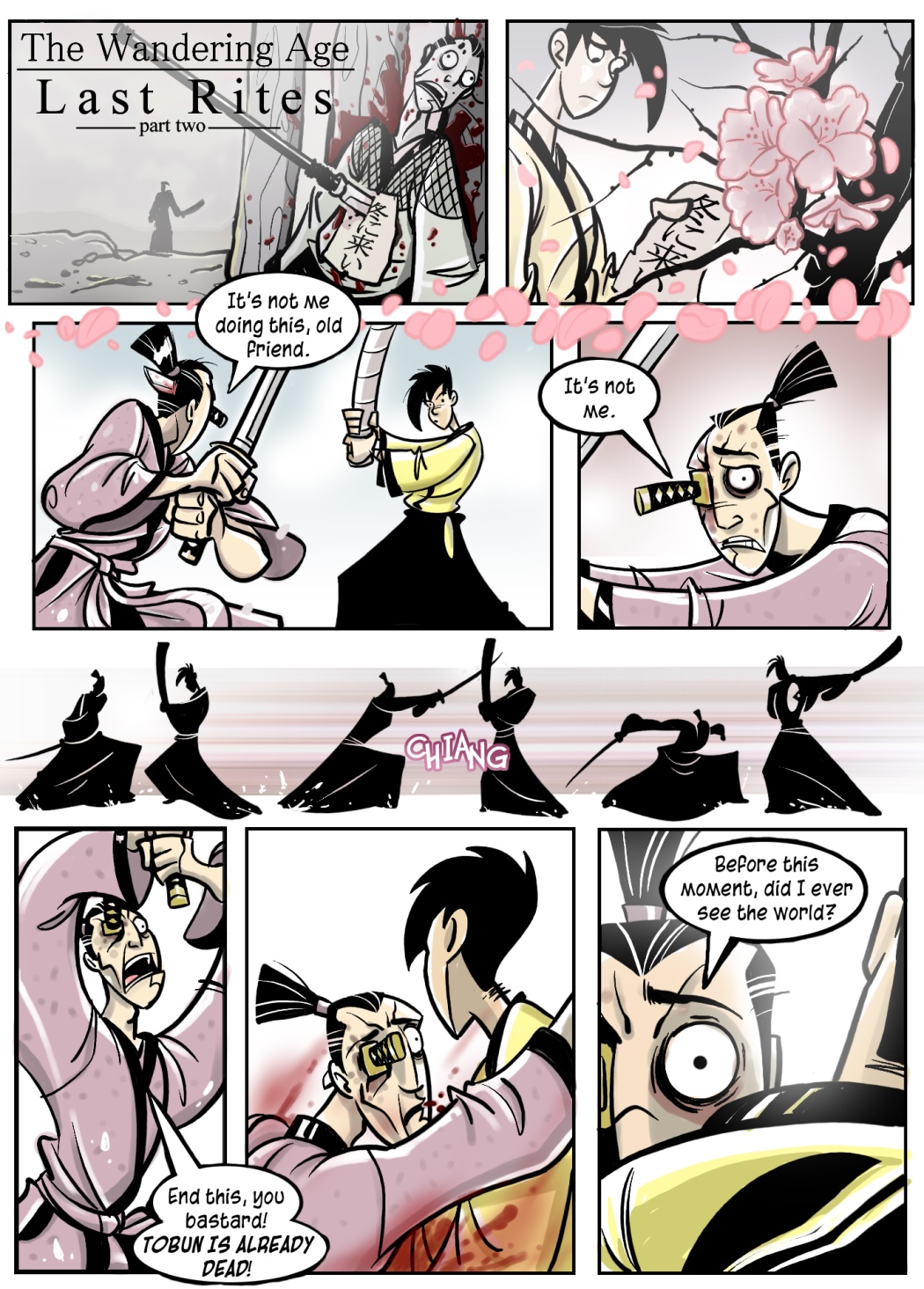 Here's the third - or maybe the second, chronologically speaking - installment of The Wandering Age: Last Rites. Of course, we need to thank Elbo for the translations in panels one and two - and we need to thank you, as the readers of a comic ostensibly concerned with gaming, for enduring our erratically sourced samurai epics.

It's just the summer con season condensing it all together, but we've been in a position lately to have people ask us what our favorite comics are. The fact of the matter is that I read far, far too many comics to present in a quick list, but it's easy enough to choose a few right off the top. Gabriel typically replies that he reads Spells and Whistles, PvP, and Copper. I'm with him there on the PvP, but as far as I'm concerned Scary Go Round is about as good as a comic gets - regardless of the medium. I'm also perfectly willing to say, as I have whenever a person asks me, that VG Cats is the finest gaming comic that currently exists. It is possible that it could be bested I suppose, but certainly not by any work currently in the genre. Sorry.

As a young man, Gabriel penned a whimsical yarn about a cat and a dog that lived together in an apartment. Well, it turns out that Tauhid Bondia - creator of Spells and Whistles - used to cook up a little something something prior to his current work called Suzie View, written by Erik McCurdy, which concerns a gradeschool auteur and her cinematic adventures. Six months ago, he had essentially shelved the concept and begun work on his current runaway success - and now, here come the syndicates, and they want to know if he'd like to put his work on Comics dot com. The notion is that if a comic is Comics dot com material, then it might be funny page material, and if you are producing funny page material then that means that you are really and truly a cartoonist.

This came up a little bit at Scott's Syndication panel. Being syndicated used to be the definition of success for a comic strips, those things were synonyms. That remains a valid way to do it, but there are absolutely trade-offs to that route that typically have to do with signing over a healthy portion of the rights to your work. You can do it on the web as well, I know several people who are doing it right now. The trouble is that you need to construct from a bizarre menu of methods a sort of "business" that can support you in this endeavor, and it's not going to be the same for everyone. Penny Arcade alone has been supported via four wholly unique systems since its inception, each one of them correct only for a discrete temporal span.

Getting back to Tauhid's magical phone call - that is actually how it happens, people. You set something down that you liked a lot, and then all of the sudden important people are like "wow, that's some cool stuff you were doing," even though you'd been doing the fucking thing for months and it never seemed to warrant their attention before. When they gaze down from their golden throne, it will strike you how serendipitous, indeed, how melodramatic and apparently contrived your successes can be. I know that many cartoonists, web and otherwise, read Penny Arcade from time to time, and hopefully you are reading today because this fact might bolster you. You won't know it's coming. Corollary: It might already be en route.

Please learn from our lessons though, don't waste your time reading contracts yourself and imagine that you know what the fuck they're talking about - if you're serious about making a living by your creative work, then it's time to be serious about protecting it. We're lucky that we can afford a lawyer now to shoehorn us out of our youthful indiscretions, but honestly, I'd much rather that we had never been indiscreet.

i feel old and foolish now