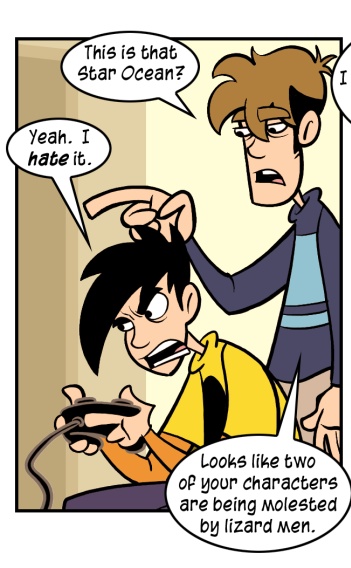 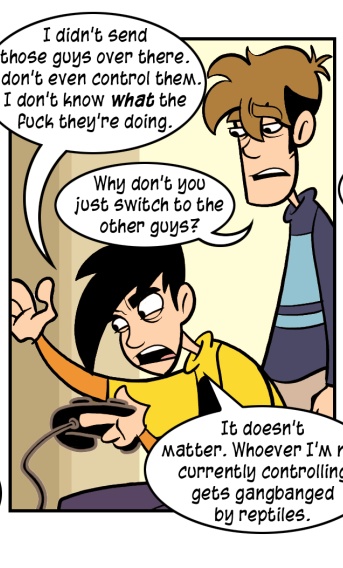 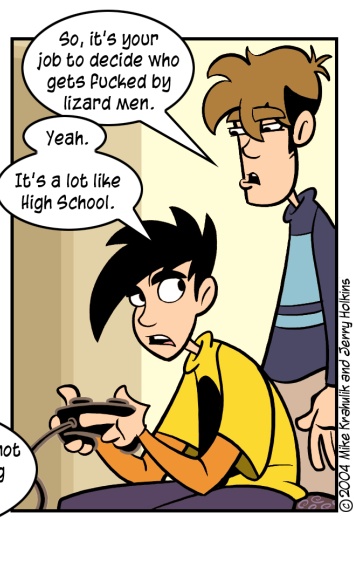 Robert was about 15 hours into the new Star Ocean when I left him yesterday, and he was pulling off some pretty cool shit - inventing items and securing patents on them for sale across the galaxy, pulling off hot combos and hanging out with nymphs. He and Gabriel do agree on one thing: it begins with nearly three hours of merciless boredom, after which point you probably deserve whatever great game might exist beyond that bleak expanse. One of them said things really start to look up around hour fifteen, and one of them began to roar and paw at the air. I'll let you guess which is which.

He picked up Phantom Brave at the same time, so all is not lost. I'd tell you about it, but it was his impassioned oration that made me go get it, so I'll let him handle the duty. It was Nippon Ichi's Disgaea that brought him around to tactical RPGs for good, and whenever a new one hits he sort of recedes from the world of the living.

I've been able to resist Fileplanet's siren song since they began the "queue" system you now see on other file sites. It's true, especially with the advent of BitTorrent, that I don't actually need their service for getting ordinary software. However, they've been so good at securing exclusive stuff - Dawn of War and Tribes: Vengeance leap readily to mind - that it just gets harder to fight it. I feel like I have a responsibility (of a sort) to tell you about these things. And since the betas apparently go out to people who aren't familiar with the fucking Tribes universe while I'm at home jacking off to the Starsiege manual, I sort of have to find my own way.

Apparently it's available to the wider population now, and I recommend that anyone with some free time get their hands on that binary. I have played it quite a lot since I got it last week, and my sense of it has changed a great deal. The first few servers I played on were much like my E3 experience - odd network response and spawning up to my waist in concrete. I raised my glass to Irrational for managing to somehow resurrect and kill the franchise in one game. Previously, this had taken two titles. That seemed like progress.

Never forget that when these open betas come out, everybody digs out that old P2-450 and begins to imagine that they are The Server Man, ladling out packets via their cable modem to the needy and disenfranchised. I started joining servers with names I remembered, names almost lost to history, like 5 Assed Money. If you played Tribes, that's a name you've seen before. And it played as good as ever. Vengeance is missing some things I really liked about the original games, but the feel is absolutely right.

So, the game that I had initially consigned to the grave, likely out of fear, was before me. And it was good. Really good. It's like with Thief. They rubbed off the number denoting its coordinate in my beloved continuum, so I don't know how to respond to this new thing. And, just as with Thief, another interred franchise has returned with swagger and drama.

One thing that I do constantly is that I keep pressing the L key to bring up my laser targeter, and old standby in the series - for the uninitiated, your beam hits a target, and then your heavy armors see a reticule in the sky at the proper angle for their mortar shells. That, along with the ridiculously useful Command Screen were the two features that largely defined the Tribes Experience for our group. Both of these things are gone. Maybe we were the only ones that used the Command Screen, or at least, used it to the extent we did - no, that's not possible. We would set waypoints on each other so we could be found anywhere in the map. Indeed, one of us might stay holed up the basement watching the sensor network, issuing attack orders on enemies as they entered the perimeter. To me, these are fundamental touchstones of the Tribes experience, and I'd imagine that they're precisely the things people railed against for "slowing down the game." Being able to find and assist my friends, even when geographically remote, is probably what kept us playing so long.

Player feedback on the game is all over the place, but I see the charge that the game has been altered to suit "nubs" frequently enough that I'll respond to it. This claim is actually from the PR department itself, it is supposedly one of their stated aims. I hesitate to call it a lie, but is a very useful idea to put into circulation. The fact of the matter is that Tribes is a hard-core game. The game has been sped up to a terrific degree. If you think it caters to new players, I call you an fucking idiot without a moment's hesitation. The things a master player can do with the grappler and the improved skiing will make it impossible - impossible - for initiates to retaliate. And that's just in demo - give those guys a couple weeks with the retail. Wait until a buggy pulls up in front of your base and five heavies pop out of the mobile spawn like some military clown car. You prancing forum cocks got the speed you wanted, and they took away the game I remember with affection. I made my peace with it because Irrational clearly loves Tribes, and maintained the spirit - but you guys haven't shut your fucking mouths for four years. I'm officially done listening to your bitching.

It is still Tribes, and I find it this pace extremely fun actually - similar to how you can change the rate without changing the pitch. I still have plenty of suits and loadouts, I love the new weapons, and the four packs in there now are perfectly satisfactory. What has happened is that the game has been altered to diminish the occurrence of stalemates in CTF. For us, Tribes 2 had an excitement threshold similar to Soccer - we would play for 45 minutes and you might have one or two caps a side. There's a case where maybe we were the only ones to enjoy it. That said, CTF isn't the only gametype. There are others where defense can play a larger role.

I can talk for a long time, as I am sure you are aware. This is a case where I am not going to do that. Taste and see.

he's got milk and honey for you