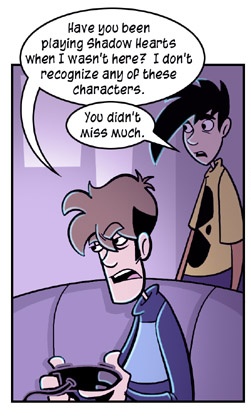 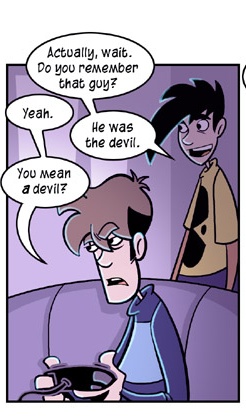 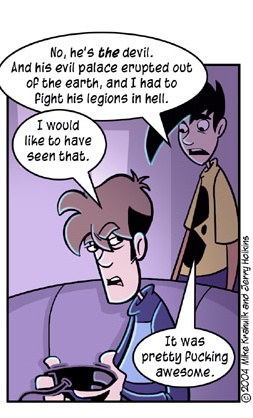 As regards today's strip, Gabe waltzes in with startling revelations about Shadow Hearts nearly every day. He found the Giurnan metablade, which reaps a harvest of flesh. Oh look, it's the Steel Womb, which renders the wearer impervious to damage. Time was you could rely on a man not to load the save between sessions. Nowadays, every time we load it up there's some complete stranger in the party and everyone's pimped out with legendary artifacts.

If we want to get the most out of these holiday releases, though, there's really no room for nostalgia. Indeed, there's barely room for the games themselves. I was shocked to see that Gabe had already given away his Paper Mario 2, as the game is charming and brilliant and precisely the sort of disc you'd be proud to have spinning in your console. But that's where we've been put, and there's just nothing for it - there isn't even time for the excellent games at this point, particularly in the realm of RPGs. We played Mario Power Tennis at that thing we went to, perfectly amazing game, smooth and fun party tennis with imaginative, wacky courts and four player minigames on top of it. I don't know if I'll be buying it. I know for a fact that it's great, I played it just a couple days ago. But the only things that survive in this deluge are high novelty and franchises.

For example, I gave in a couple days ago on Tribes: Vengeance. I loved the demos, as I said on numerous occasions. I found myself jumping into demo servers whenever I had a few spare minutes, which seemed to imply that a purchase wouldn't go amiss. I'd had it in my head that I wouldn't buy it, because as cool as I thought it was they made the TribalWar forums their design document and didn't stop until they had stripped out the keystones of the classic teamplay franchise in the service of some gameplay goal situated outside the reasonable universe. I'm enjoying the single player game - it's been well written so far, if not always well acted. It doesn't draw upon the ridiculously established universe like it could, but I'm aware that nobody but me and maybe ConfigSys.boy even gives a fuck. I knew perfectly well it wouldn't, even as the debit card slapped on the counter.

This is probably what they're thinking when they make Comet brand gum. It works like a charm. The urge to purchase a new Tribes product was completely unstoppable. I'm an Adbusters subscriber, yo. I'm all about the metacognition. And It still worked.

We are putting the finishing touches on the Child's Play site, tuning up the page for it and fleshing out the five Amazon wish lists with fabulous gifts. We're going to play the charity game correctly this time, with fancy press releases to grab attention outside of our context and glossy information sheets for vacuous members of the media, so that when they make a story about it they don't mysteriously credit the wrong people less than an hour after they talk to us. Also, I was going to say that we would paint it as less maverick this year, and try to hold the snarky comments to a minimum - but it would seem I'm already up to my old tricks.

with the address of the sender