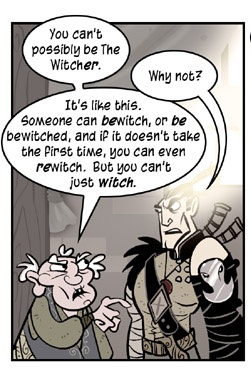 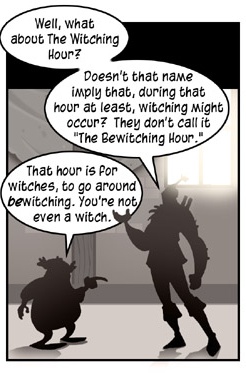 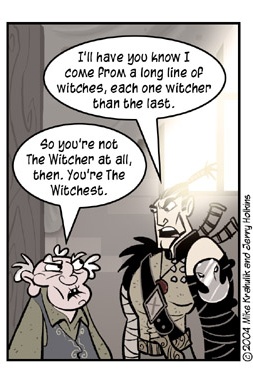 We had a chance to see The Witcher in an early form in Bioware's tiny, cubicle wall shanty on the fringe of the electronic entertainment expo. It was tucked into Bioware's presence because the game uses a tricked-out version of the Aurora engine, not because it's an internal Bioware project you've simply never heard of. What we saw there was, in my view, too early to produce substantive comment on outside of the most rudimentary sort of reflex. That's one of the things I hate about E3, and the sensation has only intensified the more I attend it. It's situated out there at some coordinate in time and space, and the pressure to show something unbelievable there is so intense that you see things which are

a) so embryonic that they should be kept a secret, early, raw, unripe,

b) so heavily scripted that it amounts to new millennium digital puppetry, plotted on some distant point remote from the interactive realms we associate with, well, games,

c) or introduced by some idiotic chirping gorgon with no knowledge of the game or, indeed, of any civilized subject

that you sometimes wish you could recline on a red couch in a white room somewhere and die.

Of course, and please don't get the wrong idea, this has nothing to do with The Witcher itself. It was introduced to me by serious, capable young men who clearly mean what they are doing. I'm just saying that a person's hard work probably deserves a less arbitrary, less batshit venue for its introduction, the annual rituals of the publishing world notwithstanding.

To this day, I sometimes punctuate the silence while I am driving or loading my plate at an Indian buffet by saying "the Witcher" in an overwrought and ridiculous voice. On the phone with Gabriel (TE) earlier today I did it, noticing that some new screenshots had gone up over at 3Dgamers. This lead into a discussion about the name of the game (and the book series, coincidentally) that we found sufficiently ridiculous.

Brenna and I moved into our first house on Saturday, and it is becoming apparent that there is a skill tree associated with men that I have never invested so much as a single point in. There is, as well, as a whole range of specialized equipment I don't have, either. These personal deficiencies have unsealed hideous new avenues of marital strife whose geography is desperate and treacherous. Let me confide in you that your wife may one day hold forth on the subject of lawnmowing, when you know for a fact is not a subject on which she has any keen insights. She will hold forth in grim tones as though she were the Mowmaster General, relating with drama and grandeur her exploits versus those despicable forces which conspire against lawns.

the stale taste of recycled air