Misbehaving with a game's physics system is one of life's great pleasures. Don't think about the domination of your species by hostile aliens and their earthly commissars for a little while. Take a moment to hit someone you don't know with a box of delicious chow mein! Smash your downtrodden fellow man with a glass jug. You'll thank me later.

Managing the role of expectation on a title - or, indeed, discerning when that expectation is present to the degree that it fouls the experience - can be a huge problem. A regular game costs fifty dollars, give or take. Steel Battalion ran two hundred dollars when it was first released - if it is not four times as fun as a mortal game, can it be said to have failed? Daikatana had many elaborate matrices of expectation ensconcing it, that's a topic all by itself, but the fact that it gestated for four years before release had already signaled the carrion birds.

So what are we to think about a game that has cooked for six years - slow roasting, by any man's reckoning. In this company, I don't even need to name it. A game whose arrival is inextricable with its unique delivery method and whose launch was predated by the already mature development suite used to create it. The forum threads typically have an air of hostile reverence, like subjects discussing a mighty (but absent) sovereign.

I suppose we are lucky, then, that we needn't spend a lot of time wringing our hands about whether or not the game is good. It is good. It's so good that no less than three times I have set this post aside for a few more moments in it. Oh, that's right - I game on the PC because while consoles tend to offer a more elegant experience, the personal computer can deliver worlds of such fidelity and verisimilitude that I can, in communion with it, go somewhere entirely else.

Apparently people who bought it at retail had some trouble getting their copies running right, it was fixed shortly thereafter. I'm given to understand that people who ride horses to work or in other ways live their lives discordant with science and reason also suffer because of their strict adherence to anachronism. Get with the fucking program. Stop mixing those specious folk remedies and download your games directly from the Intertron.

Also, Penny Arcade turns six today. I can think of no better way to celebrate this momentous occasion than to buy a cool toy - something you'd want yourself - for a young person who could use some cheering up right now.

you need a montage 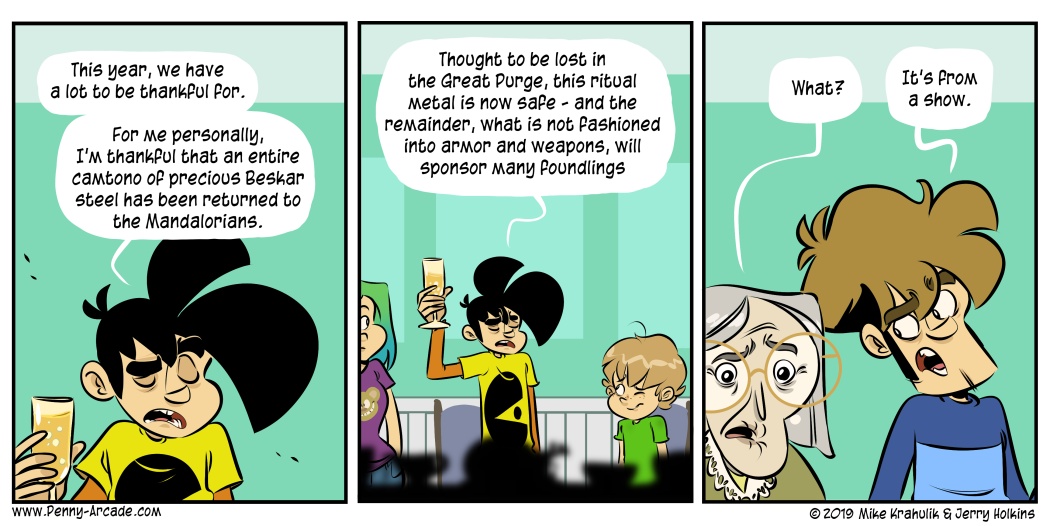