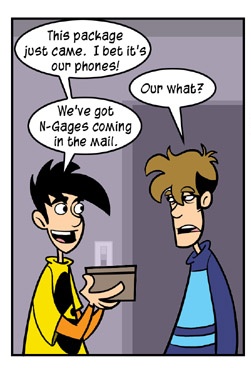 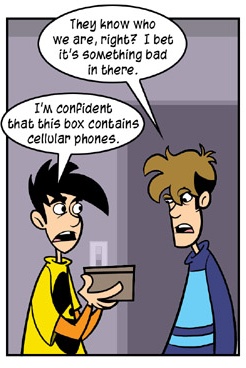 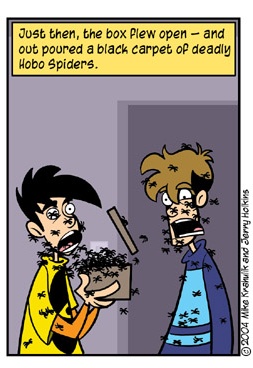 We did not actually surf a hairy wave of hobo spiders. For reasons unknown to us, though presumably they have something to do with promoting Pocket Kingdoms (which I will now link), we were sent a couple N-Gage game "decks" as part of some strange self-flagellation ritual they have going at Nokia.

I opened my own box with the trepidation on display in today's comic, if not the final result. When I think about what I would send a person who tried to derail my product launch, the product they brutally sodomized over several months is not high on that list. It isn't even low on the list. I would erect safeguards to keep anyone in my organization from inadvertently sending one and subjecting my shit to further ridicule. But there it was, nestled there in hay like the Baby Jesus. I don't know why the hay was in there, maybe it's deadly poison hay.

You might not be aware that some time after the launch of the universally maligned original system they put out another version of the N-Gage that was somewhat more difficult to hate, dubbed the N-Gage QD. What they did was resolve the biggest problems people had with the machine, namely the sidetalkin' and the ability to change the game in the system without removing the Goddamn battery. It's the same hardware otherwise, which has thus far meant that it's got just enough juice to make developers overreach and indulge their 3D fantasies without any real consummation.

I didn't play very much Pocket Kingdoms, as you can see on the competitors page they set up for the pre-release event. They shouldn't have sent me that thing with Prime 2 and the sequel to Half-Life so close, and I feel no shame for initiating triage. The only nice thing that can be said for my rank is that I'm higher than Scott Kurtz, who is ever my cunning foe - this brings me joy. That said, I played it enough to know that now the N-Gage was a real platform, because it had finally acquired its excellent game, perfectly matched to the system that will slip right under the radar of most gamers. The sleeper hit. It's a rite of passage.

In a nutshell, you build armies to scour the land and destroy opponents online. Armies consist of four slots, which you can fill with units of varying kinds. Some creatures take up multiple slots, and equipment - both purchased and player created - helps to further distinguish a given group. The game does not take itself seriously, which I wasn't expecting - the common tongue in this universe is a combination of leetspeak and lines from rap songs, which makes sense once you understand that it is essentially a parody of gaming communities. The game itself is by Sega as I understand it, and it's also available on Japanese phones. Minus the Eminem, I'm assuming. To put it clearly, the game was a real surprise. I'd imagine the simultaneous sigh of relief by N-Gage owners could move a galleon.

Gabe actually uses the N-Gage QD as his personal phone now, and the irony nearly peels off my skin. The reality is that they have made an excellent phone that is kind of a half-ass gaming rig - at least, and this is what I'm realizing, for the kinds of games they keep pushing. Pocket Kingdoms is a quirky multiplayer strategy game that doesn't really make sense on any other platform. Look at Pathway To Glory, another strategy experience that plays to the actual metal of the system. Are they finally figuring something out? That they have created a platform with strengths and weaknesses, and that development can accentuate one of those and downplay the other? I'll be God damned.

you ran out of lies