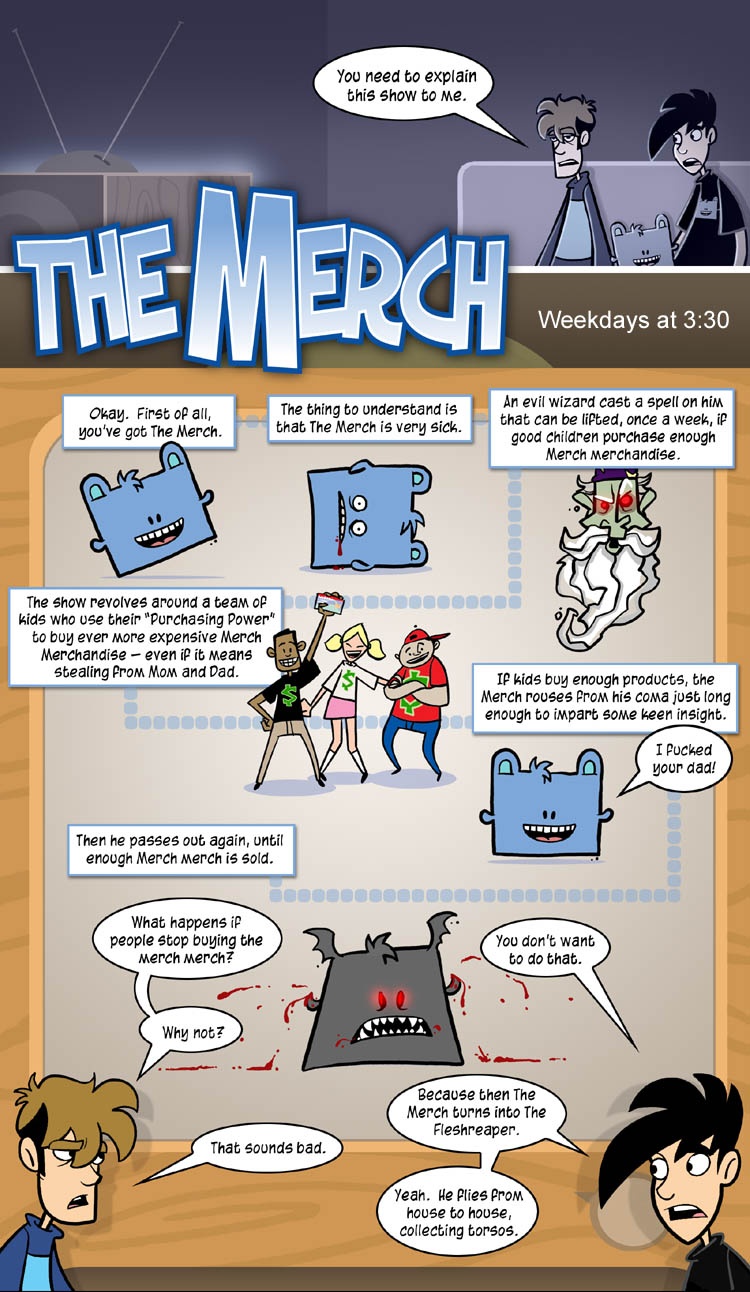 I don't know if you've seen this Merch show or not. It's fundamentally monstrous.

I'm aware that adorable, endlessly vendible munchkins are not a new invention. I'm also aware that cartoons routinely pierce a child's defenses and enfold them with retail desire, luring them with adventures and whatnot, and why wouldn't you want to recreate the Mount Danger scenario with the use of a blue laundry basket? I'm willing to yield that the shows I watched as a young man were manipulative in the same way, though my mind now infuses them with unparalleled narrative and dramatic potency. But seriously - The Fleshreaper? Jesus Christ. As devious as Pokemon is, it's never suggested that Pikachu will electrocute you if you don't run your ass out and buy Leaf Green.

You might remember when the legal battle started between hardware enthusiast site HardOCP ("us") and the malevolent Infinium Labs ("them"), creators of the spectral Phantom home console. Now, almost one year and two hundred thousand dollars later, the fracas appears to be coming to a close. The article they were being sued over was based entirely on existing research and things they'd seen with their own fucking eyes. Infinium Labs suggested a number of ways in which the article was "inaccurate," which is to say, unfavorable to Infinium Labs. So, the problem wasn't that the things they had said weren't true. The problem was that they put it all together, in context, and had the gall to announce that two plus two was equal to four.

Child's Play Final: Because we had so much help from other sites and businesses this year, it hasn't been until the last couple days that I could produce a number that would represent this year's drive with any accuracy. It's still trickling in, but with Popcap's donation in I can give you an amount. Do you want to guess first? Because I can wait while you guess.

$310,000. That's up sixty thousand over last year, which was already a number so large I could just sit and think about it for ten minutes. So, congratulations. You are officially awesome. I'd like to thank our readers, our partners, and the webcomic community for getting the word out and amassing what can only be called a truly freaky sum. What you have done is manifestly positive and generous and wonderful.

it's close to midnight