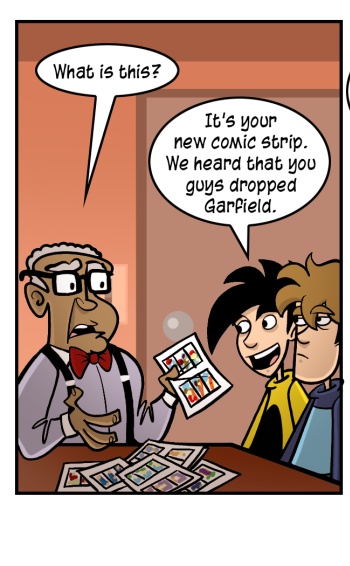 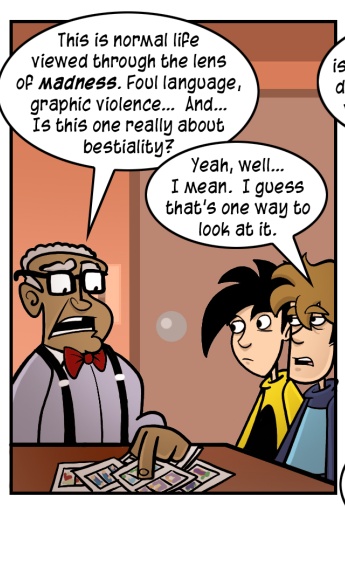 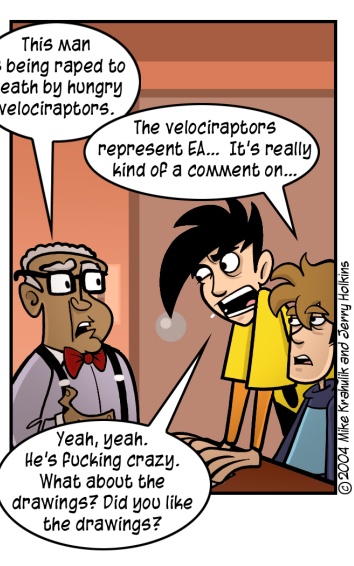 It was a montage of scenes just like the end of the new Return of the Jedi. All the races of the galaxy celebrated in culturally appropriate ways when they heard that Garfield had been pulled from the LA Times. It's hard not to get caught up in the energy of the moment, but it's more than likely just comics page deck-shuffling, so "the revolution" is probably not coming anytime soon. This leaves me with bushels of unfulfilled fantasies. Huge orange cat statues hauled off their pedestals by tanks. Every Jim Davis in every wrinkle of every dimension dragged gasping to the bottom of the ocean.

I don't know where the stricture against upstart webcomics saying bad things about our print forebears originated, but no-one ever consulted me and I never ratified that document.

That being said, we are desperate for the legitimacy that print supposedly offers! We too long to chide whipper-snappers and wear comfortable adult diapers. To that end, we did our best to secure that recently vacant funny papers real estate. All in all, I think the meeting went well.

We are still grasped by World of Warcraft, playing it every night and talking about it at length every day. We have also created a backstory that seamlessly integrates our retail and beta characters in a single epic campaign of vaguely medieval disillusionment and vengeance. I don't know where that goes in the overall geek hierarchy - Lore Sjöberg never enunciated it with any specificity - but I have a feeling that it's not going to raise our stature in such a calculation. We briefly considered taking the strip over for a thirty page recitation of those glorious imaginary deeds, but I think we understood instinctively that though you're alright with the occasional plunge into bracing continuity two and a half month's worth was less of a plunge and really more of a lifestyle. It was super elaborate, though. I had to make a chart.

There is, however, a temporary respite from the rigors of my priestly duties: here on the opposite side of the torrential holiday releases, what you might call "the lee of the stone," the next four days have the new Suikoden, Mercenaries, the new GBA Zelda, and the one that stands out even in this company - Resident Evil 4.

Gamerankings only has three reviews on file thus far, but with two tens and a nine point eight it is easy to determine the prevailing wind. As near as I can tell, and I've seen every Goddamn frame of video ever released, it's a kind of grisly, mature action game with context sensitive, timing-based action buttons and vastly more interactive environments. There's even stores, where one can buy bullets, which all by itself represents healthy progress. The most recent video, the one you can see in some kiosks, seems to hint at some possible points of continuity with previous titles. I'm looking forward to an opportunity to gently set down my shadow wand and raise to my shoulder a bolt-action sniper rifle.

in a distant hellhole