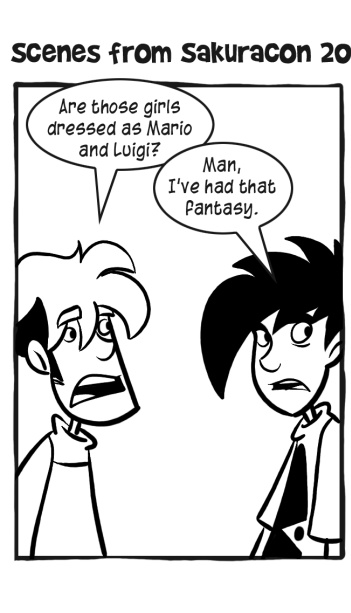 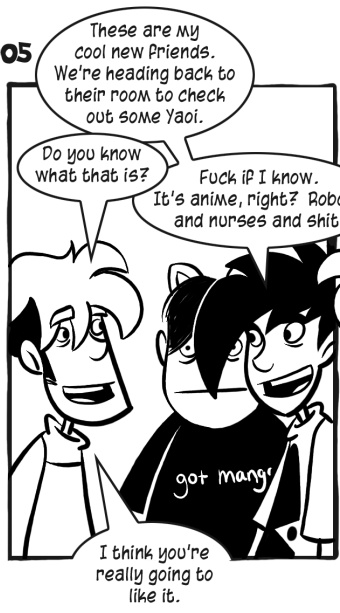 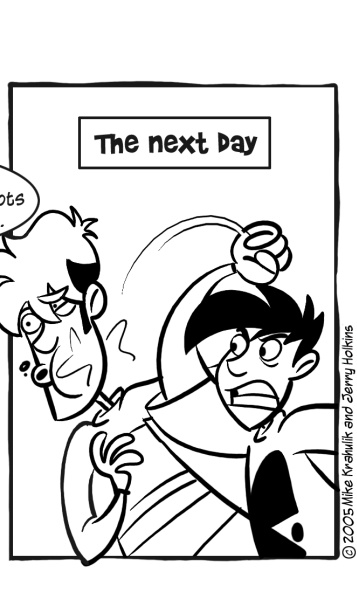 Sakuracon gets more comfortable every year. Well, that's not exactly right. I think it might be better to say that as we survive each convention, we become more comfortable with the psychic onslaught it represents. A few scenes from the convention can be found in today's comic. Additional scenes are transcribed in this newspost.

It is critical when comprehending the following that you understand this: the day before this convention, I boarded an airplane at seven-thirty the evening prior and flew all night to get here at five-thirty A.M., which lent the proceedings a kind of shimmer they do not naturally possess. Understand also that I had been drunk for nearly a week. A sign on any beach clearly demarcates where alcohol can and cannot go, but like the malevolent machines depicted in the Terminator series I have learned to wreathe such things in flesh.

Beginning last year, instead of driving home after the dealer room closed I took the room they offered and absorbed some of the cultural stuff that I typically don't see. In the process I met multiple groups who manifest a series of "transient crews" with which I am absolutely comfortable. I don't feel as though I need to be "on" with them and they seem to accept the fact that I'm pretty boring most of the time. They tolerate my acute linguaphilia.

So when one of these groups told me I needed to attend the "Anime Dating Game," I assented because my will was utterly pliable and I hadn't the strength to erect that fortress which ensconces all rational minds. In addition, Sarah gave me a bottle of Vitamin Water, which I immediately understood did not actually contain water, nor did it contain vitamins, excepting of course those vitamins contained in a Whiskey Sour. I append the "sour" only out of courtesy. By volume, I would not say that it constituted a meaningful percentage.

The Anime Dating Game dilated the aperture of my mind. If such things were possible prior to this, I was not aware of it. The event was inaugurated by a creature whose fingers were each a tentacle almost three feet in length molesting two people dressed themselves as tentacles, recursive erotica iterating in an endless loop. The event was lead by two men who would say things that were unintelligible to me and the room would erupt in vesuvian manner, which clearly demonstrated what Penny Arcade must be like for an outsider. When three male contestants were exhorted by their potential mate to produce a hickey on their person or to produce this effect on each other, a chorus of women began to shout "Yaoi," which is to say that they were demanding sexual activity between males. When this did not occur, men leapt from the audience and attached themselves as lampreys do. I make no value judgements about that kind of thing, but the degree to which it was encouraged by the attendant throng is a feature of Anime fandom I was not aware of prior to that. During the event I would confer from time to time with a young man about Dungeons and Dragons or attempt to bridle my terror when talking to an almost impeccable Samara/Sadako.

I appreciate very much your attendance at either of the two panels, though I apologize that the first was at nine a.m. before my consciousness had entirely coalesced. As for the eleven o'clock panel, which was in an extremely small room they turned people away from, I hope that my odd mannerisms were not entirely distracting. I never had any intention of becoming the object of enthusiasm or adulation, and as I said at the time, we are uniquely unsuited to it.

how should i react