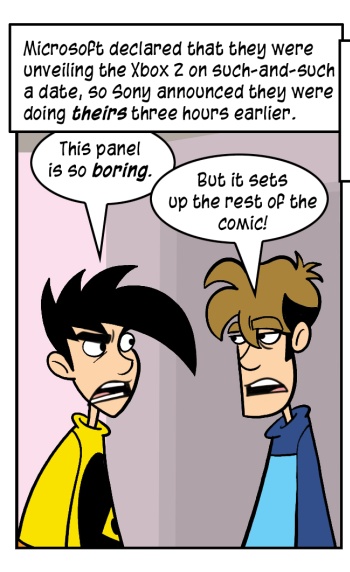 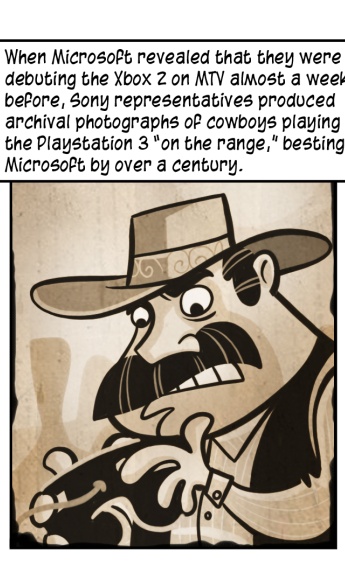 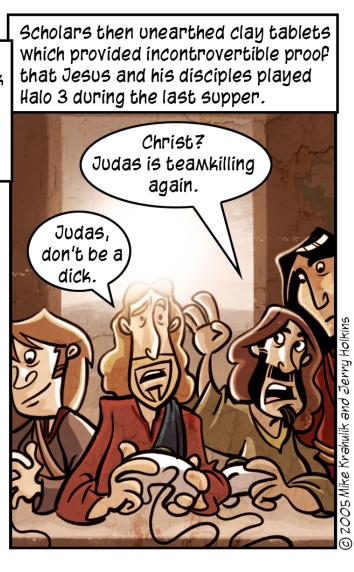 It was clear when the first volleys were fired at GDC that Microsoft, Sony, and the arrayed forces would clash in a brutal, blood drenched E3. They're sort of circling each other at the moment, like in the music video for Bad. We know where it all ends up, because we can fling our awareness forward in time.

Occasional internal bombast notwithstanding, I don't know where Nintendo's Revolution fits into this grim Main Event. Because the machine has features which are either unripe or outside the ordinary continuum of expectation, I have no mental scheme which can position it against their competitors. As a result, and you've no doubt seen this as well in other forms of media, a brawl that is between three parties is almost always depicted as one between only two, and Nintendo is marginalized further in this generation. There is a kind of narrative in place and the players can largely be presumed.

It's clear to us that Microsoft aims to create a kind of electronic wrecking ball with the vigor to simulate each hair follicle, even on an extraterrestrial hair beast. We don't actually know it's true, but it is the general presumption that it is Sony's aim is to subjugate mankind, presumably beginning with their business competitors - so we at least have a starting position, estimated momentum, and the direction their force is projected.

Whenever Nintendo says anything, the only impression you get is that they want to make good games and they don't think that better hardware is necessarily the optimal route. That's actually fairly subversive, given the known trajectory of the industry. Comparatively, it's a nuanced position - but you and I are perfectly capable of understanding it because have had these conversations ourselves. I don't know how far such a notion can be propelled into the viscous expanse of media consciousness.

There are four things what needs mentionin':

Pork has been extolling the virtues of this Pelican Power Brick thing, and it seems like picking one up before E3 might be judicious - if you aren't already familiar with the concept, it's basically an external battery pack that you can charge your PSP from. I usually see it for about twenty bucks, which doesn't strike me as offensive.

I noticed a review of World of Warcraft being posted just today, and I was curious about the mental acuity of a person who would do such a thing, but it's totally reasonable: it's actually a quick run through what's going on in the Test Server, which currently has a ton of new features and art upgrades installed. Haven't seen a lot of these shots elsewhere.

Speakeasy gave us some space for files, and we have every intention of making them regret it: we just put up the trailer for the PAX DVD. It'll be somewhere in the neighborhood of twelve or fifteen dollars, it has two DVD's dedicated expressly to the concerts, a few select panels on the first disc, and every panel of the entire show in video formats for watchings on your machine. Do what you want with the trailer after you download it, make a torrent, whatever. This is just where you may snatch it initially.

We're trying to figure out the best way to maximize the space we have for PAX at the convention center, and we have come up with something that we think might be awesome, but we don't know. Tabletop gaming, in the literal garage? Your thoughts?

you don't even know what the half is