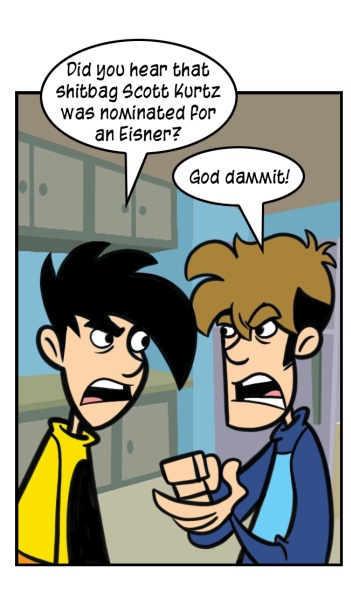 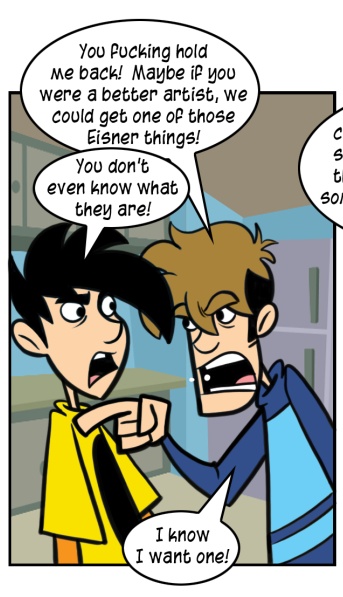 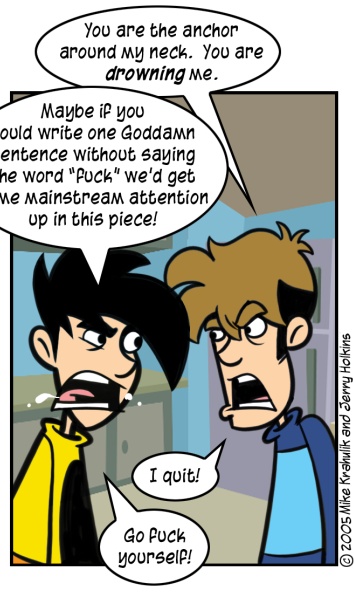 As of today, I've pretty much had it with Gabe. The strip you see here every other day is the result of my pure gold being forcibly commingled with his utterly tragic shit. For example, I know a seven syllable word for a common mental condition that he never lets me employ in the regular course of events. Come Monday, you're going to see Penny Arcade as it was always meant to be - with my own sure hand at the rudder. Erudite sailing analogies are just one more thing I bring to the table.

The Eisners are for "long form" comic works I believe, which is why a lot of the comics you read online aren't eligible for one. Scott does a strip, sure, but apparently if you put the strips one over the other and put them in a book the judges become confused. I'm sort of surprised that Scary Go Round doesn't fit the bill, or maybe it simply wasn't submitted, because it's sort of irresistible and charming and has been from the word go. Achewood has been an obsession for years, but one of the greatest things about it are the blogs by each character, something that wouldn't fall within range of the judging apparatus. It's cool to see Kazu on there in the digital category, but I'm trying to figure out what exactly they mean by Digital Comic.

Athena Voltaire is a pulp-action serial that could just as easily be printed out if it was presumed anyone would purchase it. It doesn't require this medium. So when they say "digital," do they mean that it was created with digital technology? Whoops, now we need to include virtually every currently produced comic. Let's ratchet it back to manageability: is it just that the shit is hosted online? That's kind of ignorant. Scanning a piece of art and hosting a .jpg of said art is not a mystical process, akin to alchemy. They make machines that will perform this apparently bold feat in under ten minutes. So, in the case of Mom's Cancer - which is excellent in the way all autobiographical comics aspire to be - he's actually got a publishing deal which made him withdraw it from the web. Is it still digital? Sure, it's up now, for judging. When it hits print in 2006, will it be eligible for another Eisner, simply because it underwent an entirely trivial state change?

I don't think they've actually thought much about it. Do they just want in on some of those Webs they've been hearing about? The Internet is not the Ethereal Goddamn Plane. It's a display medium. It has capabilities unique to it. Will we have a "stone" or "clay" category, after the coming apocalypse? I submit to you that we would not. It's an odd, irrelevant, insulting distinction that serves to demarcate otherwise identical work, for no other purpose than to corral the medium. Period.

why does he always call me