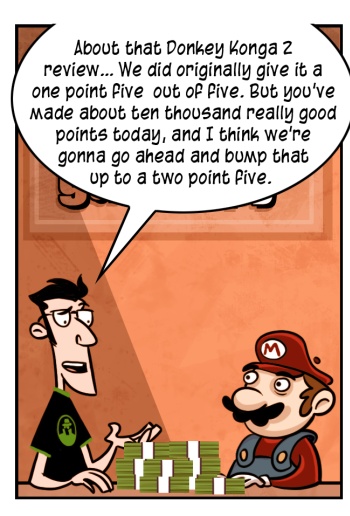 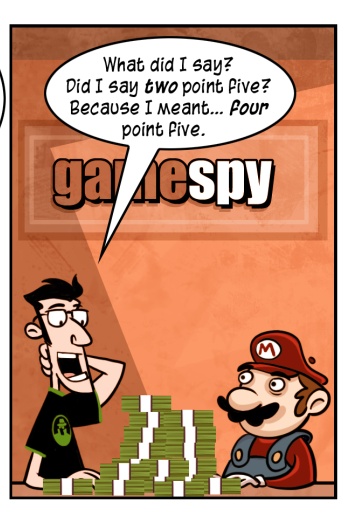 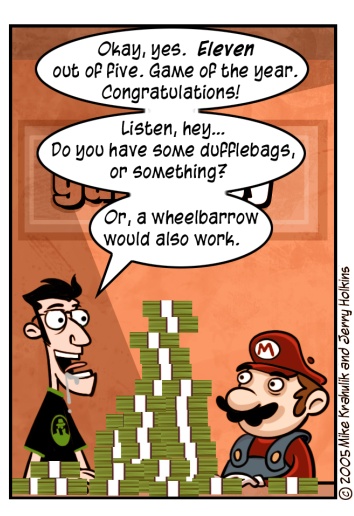 A freelancer for GameSpy wrote up a review of Donkey Konga 2 which they did not approve of, but instead of simply doing away with it or directly pasting a press release into the news script, they tarted it up and shoved it out on stage. To hear him tell it, they changed his one point five score to a three, adulterating it further with phrases friendly to the game in question. The review has since been removed, hauled off the Internet - but Google remembers all. Or, at any rate, it did. I didn't care for the review, and I doubt their fiddling made it demonstrably worse - but let's not get ahead of ourselves.

Because Nintendo has chosen GameSpy's backend technology for the online service they're developing, typically the jump that gets made is one that points toward collusion. While I might indulge that kind of thing in a comic strip, I don't really subscribe to it - because I know that it doesn't take something as elaborate as conspiracy to bring a thing like this about.

Let me tell you about a friend of mine.

He's written all sorts of reviews for all kinds of places. He's had reviews completely rewritten that still retain his byline. And not just rewritten, I mean to say that the purpose of his original text was inverted. In another case, the review was not modified, but the score was. The numerical value he had given it was higher than the score the publication had awarded Warcraft III, so clearly that dog wouldn't hunt.

It's not some evil force at work: there are review voices, and there is an overarching editorial voice that publications online and off try to maintain. It's their job to make sure that a score does not occur in vacuum, but fits flush in the edifice of their overall perspective. For example, IGN tends to score games a little higher and Gamespot tends to score them a bit lower. I accept that I live in a complicated world where a matrix of factors - factors which sometimes include the raw machinations of business - are distilled into some value. It doesn't keep me up at night. I just keep it in mind.

As for the review itself, you aren't missing anything - it's exactly the same shit I read in every other review. Score-wise, I mean, no - I don't know what number to associate with a person pretending to play the drums. I own four pairs of bongos myself, I recognize this places me in the minority, but if you've never been able to get at least two and as many as four people together to play it, I'm very comfortable saying you have no objective basis for discussing the game in the first place.

I'll tell you that I'm tired of hearing every person who reviews the fucking game tell me what kinds of music they don't like. I don't give a flying fuck what kind of music you listen to. What I want to know is if these new songs provide interesting, original rhythms I can play solo or with my friends when they come over. Will it extend the amusement I get from the peripherals I purchased? I don't want to know what's on your fucking iPod, and I don't care if this music does not create in you a state of elevated consciousness. I've played through every song, and half again on the punishing difficult mode, and I vouch for the gameplay provided in this expansion. The tunes provided by Donkey Konga 2 include many popular "radio" songs which supposedly amount to a kind of despicable mainstream outreach program - as opposed to that solid gold line-up in the first Donkey Konga. I suppose these new "tracks" simply lack the ironic kick of the first game's "Bingo Was His Name-O" or the haunting, recursive nautical shanty "Row, Row, Row Your Boat."

oh shit i got a headrush