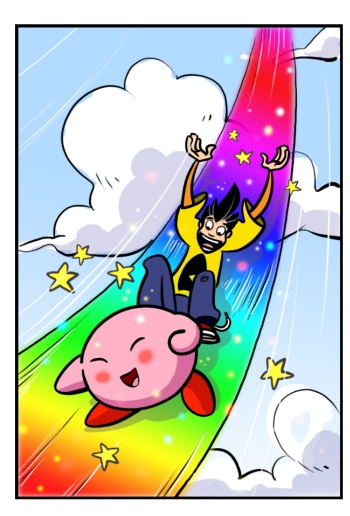 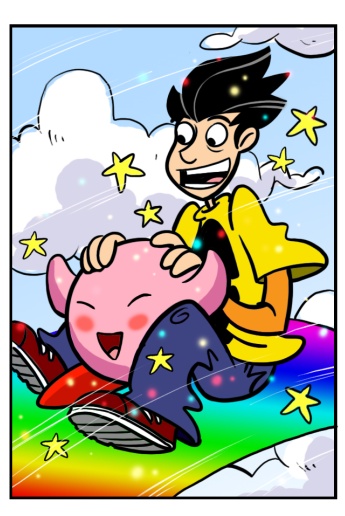 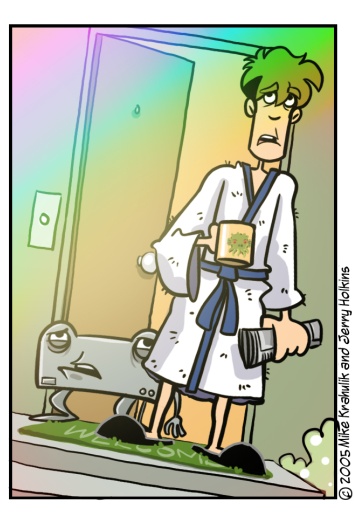 I did refer to the Nintendo DS as a "useless novelty factory" at one point, which I will admit was impolite, but so many of the games that come out either don't make good use of the device or posit some novel idea and then don't follow through. Kirby's Canvas Curse has absolutely nothing to be ashamed of in this regard. It is beautiful to look at and plays with a sensibility that feels classic from the outset. Imagine that gaming history had followed a very different course - with pen interfaces de rigueur when the immovable tenets of platform gaming had been conceived - and you will be very near the thing.

The adorable Kirby can be tapped to dash through enemies, stealing their abilities, and once they are stolen in this way Kirby can be tapped to utilize it - but primarily you interact with our elastic hero by drawing beautiful rainbow bridges for it to roll and bounce on. Whatever direction you draw the bridge gives it momentum, like unto a conveyor belt, and curlicue shapes can even be drawn to ream foes. Shields can also be created from the same whimsical material. The entire game is played with the pen, there's no additional button presses that require "monkey paw" style hand positions to manage the stylus and whatever other gameplay fantasies the designer attempted to inflict. So the levels just fly by as you react to situations in intuitive ways, with a level of interaction that truly requires the machine. I love it. I am a grown man who draws rainbows. It should probably be me in that strip, but we prefer this formulation.

Tried to jump on Battlegrounds with my other hand-selected gourmets and come to a final conclusion on World of Warcraft, but demand for their multiplayer battle spaces was such that one member of our guild waited two and a half hours to get into Alterac, the larger of the two areas. We jumped into the queue and waited for a half an hour before we realized that our timer wasn't even moving, and had on several occasions even added time. What I've heard is that the wait is often caused by Alliance/Horde disparities on your server - if the balance is off, supposedly you can expect to spend a lot of time queued. Gabe got in just before I logged out, I'll see what he thought of it today.

The server balance thing, if that is even the problem, seems kind of intractable to me. Personally, I don't care if I'm fighting characters that are specific to my server or not, and I wonder if there would be some way to make the Battlegrounds themselves server agnostic. Also, the way that you get in line for the Battlegrounds themselves doesn't really make sense to me. Essentially, you travel out to hell and gone, usually someplace that has no compelling content for your level, to touch a red instance gate and get in line with your party. You're free at that point to go wherever you want to, and it will teleport you back from wherever. Tonight when we try, we're going to hit the gate, hearth back, and then adventure as per usual while we run down the clock - it's not that onerous a procedure, but I don't understand why it's strictly necessary to do it. I'd love to see "recruitment" drives in major cities where I could jump in the queue, or even a form like the existing "guild charters" parties could sign and mail. The gates I went to last night were completely crowded with people just sitting around crossing their fingers, waiting for the server to pick me, pick me when there is an entire game world in need of their heroic service.

it ain't no victory