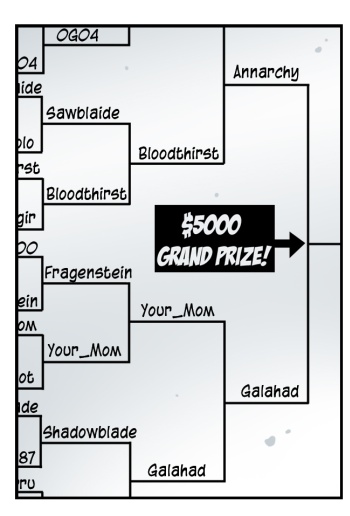 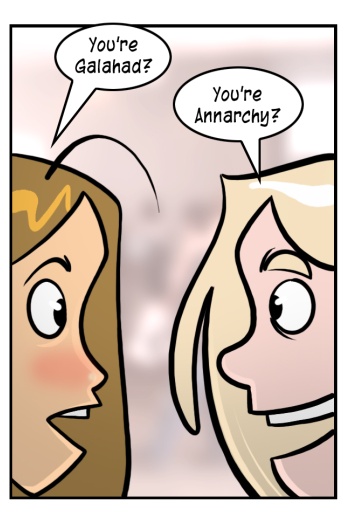 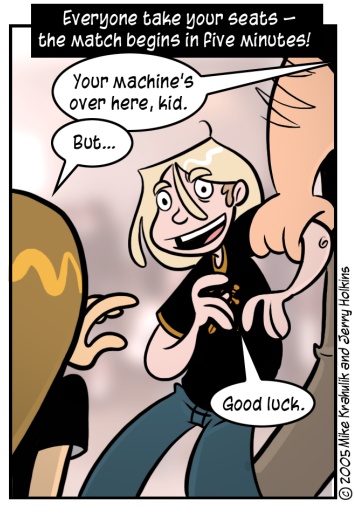 As though being flung through the air in a steel tube were not already a grave matter for a rational person, one must necessarily arrive at an airport, a zone altogether hostile to the operation of the mind. Forever fixed in a twilight state, everyone is either running as fast as they can (see encumbrance rules), or they are shambling mindlessly in search of brains. When taking advantage of San Diego's restroom facilities, I saw that coins up to a dime had been dropped into it, so many that they nearly reached the water level. What a grim, I thought, what a grisly locale that its urinals and its wishing wells are synonymous.

We have delivered unto you the penultimate strip of young Annarchy's adventure, and having arrived down here for the convention I must emphasize the extent to which we appreciate your indulging us in this regard. We spent the better part of the day Tuesday setting things up for your imminent arrival, and come Wednesday evening we should be prepared to greet you in our grand pavilion, numbered 1428.

Dumbrella enthusiasts are already well aware, but they're situated not ten feet from our booth. Dayfree Press is situated just up the aisle from them, while the two major webcomic conglomerates are just to our other side. I'm trying to figure out if the show is doing it on purpose, or if these booths made some kind of preference known - in any case, it will be an opportunity for bystanders to witness the power of this fully armed and operational medium.

I met Brooke from Broken Saints last year, and I guess they're at booth 5528 or so - I need to go see how he's doing. People who attend trade shows already know, but dealer rooms are such strange, contained universes. The people there have "addresses." You might see these people five or so days out of the year, but there's such a wealth of specific, shared experiences that it engenders an odd kind of fraternity. Relations begun and nurtured under purely diplomatic auspices are now, after four years of iteration, something akin to actual friendship. It seems like that would be awesome, but in practice all it means is that they can take your Into Eternity CD and never give it back.

recall the spirit breaking through