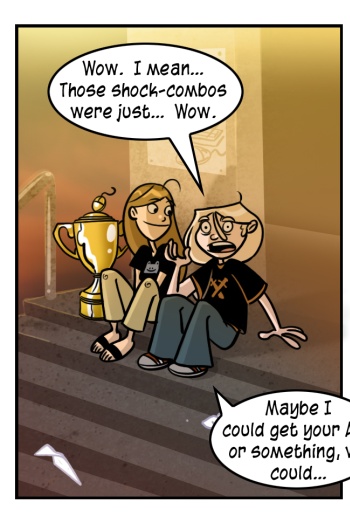 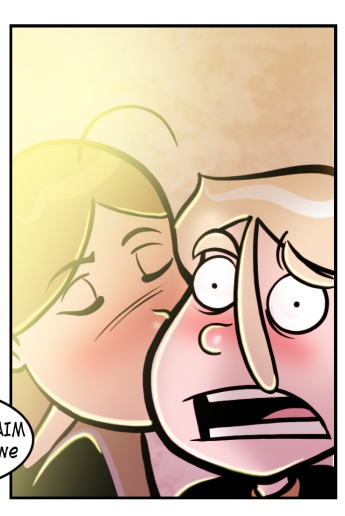 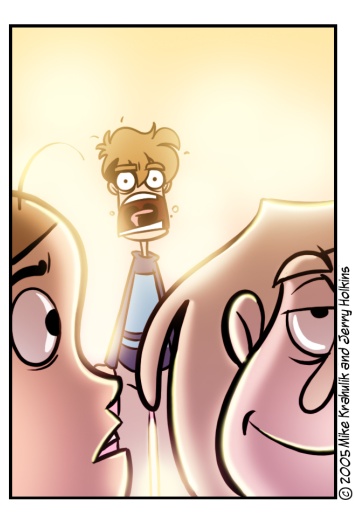 The Ann storyline - which huge nerds at the convention have dubbed the Ann Arc, has finally reached its scandalous conclusion. The summer teen movie phase of Penny Arcade is over, and we may now resume making whatever it is we usually make. It's been a couple weeks, I'll probably need to hit the archive and take notes. I dimly recall a scorpion, pulsing with an emerald light.

The first day was bedlam, and the second day was spotty and strange, but as a social endeavor this show is already the undisputed champion. For the longest time, I had resisted reading Sam and Fuzzy because I have always been uncomfortable with fur - there's just something about that dense hair I can't quite endorse. However, despite the name, it's not really a focus of the comic and I've found my joy in reading it unimpeded. White Ninja, which I am fairly certain is Gabriel's favorite comic, is created by two polite, seemingly reasonable young men from Canada who don't really have any idea how brilliant they are. And Little Gamers, whose authors have never uttered an unironic phrase in English, are... Well, it's difficult to compliment them without lying. When I saw them last, they both appeared to be fully dressed.

Internet at this hotel is free, but only in the lobby, so while I'm able to upload posts and strips I'm still essentially disconnected. I access a network of 'net-enabled readers and virtually interrogate them when they come by. For example, mortals have informed me that an expansion for Battlefield 2 was just announced, Battlefield 2, a game which is not itself complete, which augurs pretty clearly their fucking priorities over there.

(Full disclosure: I had a half-orc fighter in 3E named Augur, a character whose origin I was very proud of until I realized I had essentially created Thrall from Warcraft. Recreated, I guess I should say. Created again. Shamed, I retreated to my bleak wizard's manse jutting atop The Crag of Never to brood.)

So, what's up with you? Are you capturing flags? Are you defending flags from other people, determined to capture them from you? Oh, to be a flag, and all the world my constant paramour!

they're going to get you every time