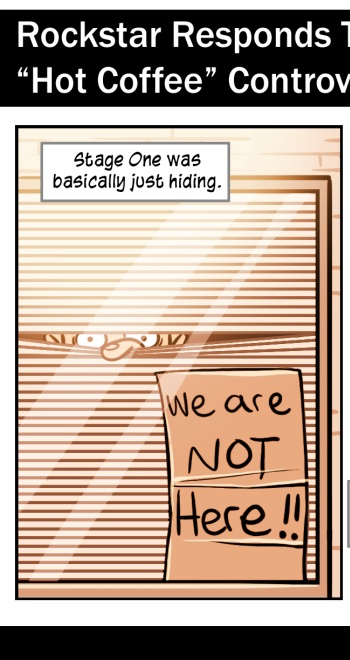 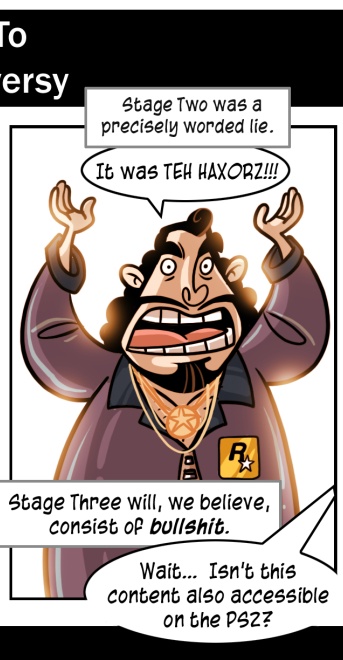 It's unfortunate that in order to defend videogames, it usually means you're defending Rockstar specifically.

Parents usually receive the brunt of the gamer assault, and their responsibility is real, but numerically they're buying the Goddamn things. This Hot Coffee "mod" - which by now people who are not gamers or politicians know about - essentially means that publishers, developers, and parents aren't at parity, because they're apparently willing to sneak this shit into games under cover of night and get rated on the marginally cleaner subset. It's not "fair play." The code is in there, and even if you have to perform some kind of obscure dance to bring it to the fore, that's an academic matter when a game - or an entire medium - becomes ordnance in the culture war.

The ESRB is suggesting that they may change the rating of the game to Adults Only, a category that by their own definition should see a great deal more use in a retail environment. This is great. Look at the descriptions for these.

MATURE Titles rated M (Mature) have content that may be suitable for persons ages 17 and older. Titles in this category may contain intense violence, blood and gore, sexual content, and/or strong language.

Or, as the rest of our culture calls it, "Rated R." Check out AO.

ADULTS ONLY Titles rated AO (Adults Only) have content that should only be played by persons 18 years and older. Titles in this category may include prolonged scenes of intense violence and/or graphic sexual content and nudity.

This can't seriously be their distinction. The scenes are longer? I played Resident Evil 4 nearly 26 hours, all told. I'm going to say that maybe nineteen hours of it was spent looking down the iron sights at humanoids. The reality is that once a person is 18, a violent videogame is fairly minor in the spectrum of "adult" content available to that person. Looking over my collection, if the duration of the violence is the distinguishing factor, I'm trying to figure out what purpose Mature serves other than to remove the stigma from otherwise "adult" content and grease the wheels at retail.

I don't like being strident or suggesting that the ESRB is fundamentally unserious about rating content in an effective way that our society recognizes - but they'd better have some fucking answers on-hand to deal with this shit. There's no question that the industry is beset by career opportunists and lazy people willing to outsource their responsibilities as parents, but the pronounced winking and looking the other way on the industry side of the equation won't fly with this level of scrutiny en route.

they know what they do is wrong