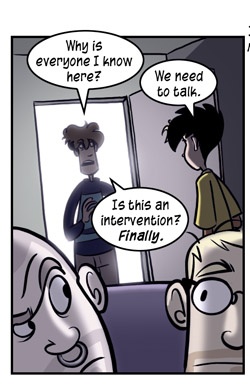 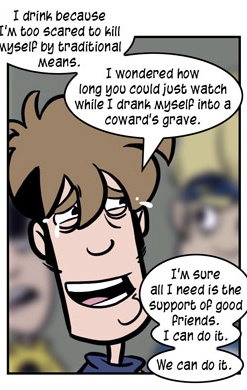 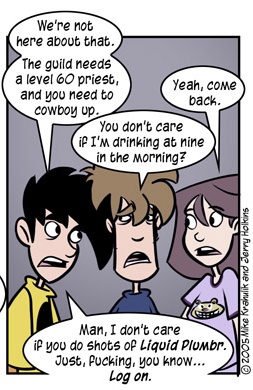 I really had escaped, you know - before my relapse.

I had taken up such wholesome hobbies in the interim! I would sometimes consider altruism as I sat beneath a poplar. On more than one occasion I scooped up a field mouse, and though it cowered in my palm I did not bop it. The urge to do so was powerful, but the period I am describing was characterized by tranquility.

I don't know if you've ever been in the same position. I've been in guilds for games considerably less amusing than World of Warcraft, and it was the guild itself that made me quit - which is to say, the slow conversion of my leisure activity into responsibility, which historically I have shirked. But there is a threshold that has never been reached prior to this: being the more PC attuned out of the two of us, I always scout the genre out ahead of time. I've usually quit before he ever even considers playing a game. Now I've got him, Kara, Pork, and an iron chain of acquaintances cinched around my trunk, a dark convocation projecting a fierce gravity.

I can't even imagine the money this perverse force represents to the Massive industry. What use have they for an "accounts retrieval" department, when every peer group represents a shuddering cabal of junkies hot for Shadowcraft or Wildheart?

I "rolled" the "toon" as a priest, which makes their plaintive cries shudder with greater intensity. I've got friends everywhere I go with this simple menu selection, made months ago. After a short absence from the game once before, I came back from "summer vacation" to find that I was suddenly very popular. People I did not know were sending me very friendly whispered messages, and it was not apparent to me initially why that was. The reason was so inherent to my being I couldn't perceive it. Oh, that's right, I thought. I can raise the dead.

i got some dragstrip courage