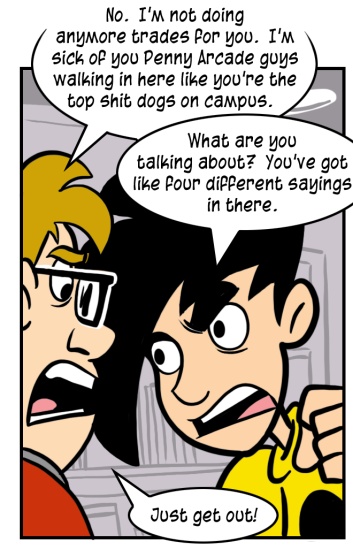 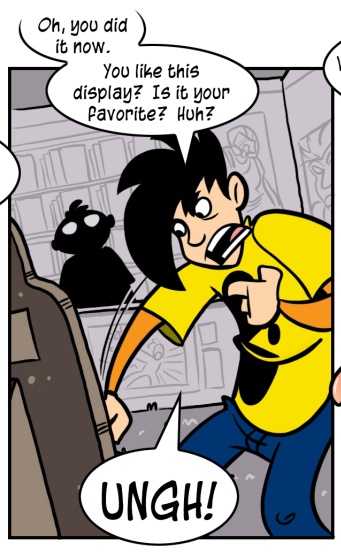 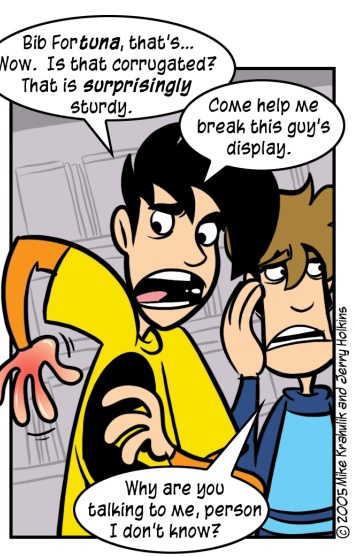 So there's apparently some kind of feud going on between Gabe and the guy from our EB.

We weren't even aware that there were ongoing hostilities. A friend of ours went over with some trades, and through some method - scent? - our apparent nemesis was able to determine that this person was our envoy. He proceeded to analyze Penny Arcade in-depth, I'm told he had charts, lamenting the lack of punchlines and so forth, asking why she would hang around with those of such base character.

I wasn't there when Gabe did whatever he ended up doing, but I was there the following day, and there was scorching and other abrasions on the counter. The story I heard in the food court was that it concerned dead pixels. It turns out that Gabriel has this effect on people, no doubt forged in some apocalyptic schoolyard row, an almost mystical ability to say the one thing that will form an abscess in a person. So I suppose this strip has become true, in a way. Minus the pants thing.

It's not like I was going to invite the guy to my birthday party or whatever, but damn. End of an era!

We used to go in there a couple times a week just to hang out. Yes, we were those guys. The ecology of a given Electronics Boutique is always so unique! There are those barely civilized kids scrambling around, their mothers convinced that the store represents some kind of daycare while they get their hair did. There was another man, middle aged, who cut the figure of some gaming swami with wildly diverse tastes. We also sported a warmly dressed man who was in there every time we went, a man who talks to the machines in the kiosk, and I'm open to the idea that these machines are also talking to him.

We go to Gamestop now because it's a little bit closer, but their PC selection - and I don't know if this is nationwide - their PC selection is an optical fucking illusion. You can put your hand right through the rack, and it shimmers and warps when you do so. I shudder to think what will happen when it's nothing but Gamestops from sea to shining sea.

Something for those who upgraded their PSP firmware, or will come the 12th: free app PSPVideo 9 now supports AVC encoding, which (from the samples I've downloaded) gots mad flavor. I guess it's essentially in beta form, but I ain't scared none.

no-one calls me on my robo-telephone