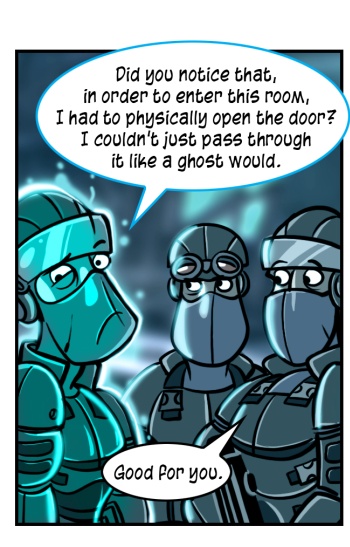 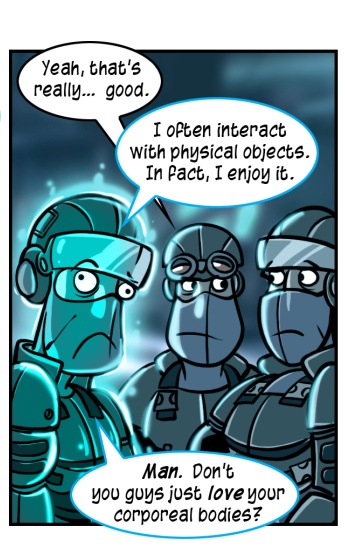 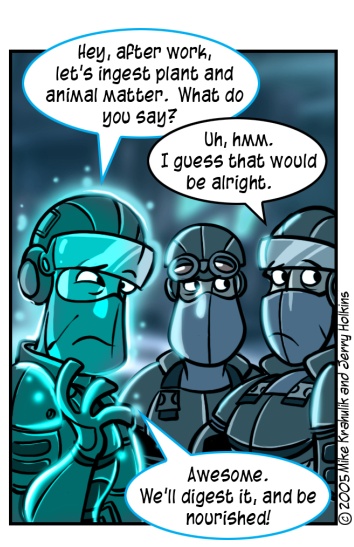 We picked up Geist, mostly to make comics about possession, and ended up practically affixed to it for hours.

Given the history of Penny Arcade, our previous statements on the game hardly amount to a feud or something - we've had those - but you could accurately call those words "stern." It may just be that we are driven mad by a need for stimuli, but Geist really does have its moments. You can understand why they would have plugged away at it as long as they did.

It doesn't look or sound particularly good most of the time. I'm being nice. It would be like if a young game fell into a deep well, languished for days, and was eventually hauled out by crane. They're the artifacts of an extended development period, and it's unfortunate that it didn't emerge from that muddy hole more contemporary somehow. As a result, there are things here that people will never see.

There are silly elements you need to contend with, if you're going to enjoy it. This dog food thing is still very real, but you don't just go into a room and scare a dog over and over until you win. That's the worst example of their gimmick: you can only possess a living thing once you have scared the bejeezus out of it. Most of the time, this mechanic doesn't feel so stupid or obvious. You're doing something that feels more like infiltrating a secret laboratory, as opposed to haunting a PetCo. Inhabiting an object gives you a view unique to it, and the voyeuristic thrill of looking through the glass of a pressure gauge or peering out from a laptop screen is - as I'm sure they intended - an odd sensation.

Because that dog thing was the most psychically resonant example of the gameplay, every time we saw a dog we just assumed that we were supposed to scare it somehow. Some of our efforts were quite elaborate, but turns out dey's sum dawgs jess don' scurr.

There are some truly interesting boss encounters: imagine engaging in a firefight with an opponent and his shellshocked retinue, leaping from host to host around your bewildered foe. That's not something I've done before. It's one of many original experiences in a game that occasionally delivers on the power of its premise.

i swear it's the truth