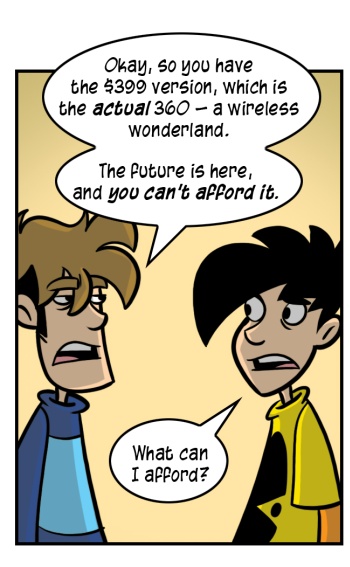 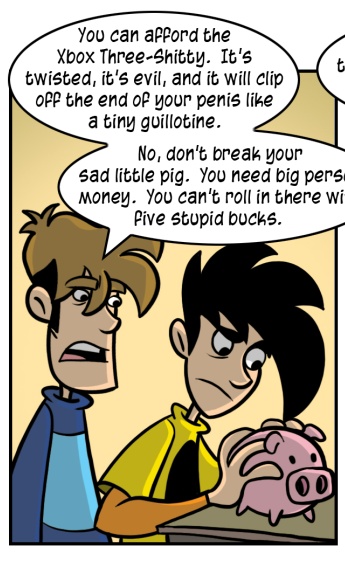 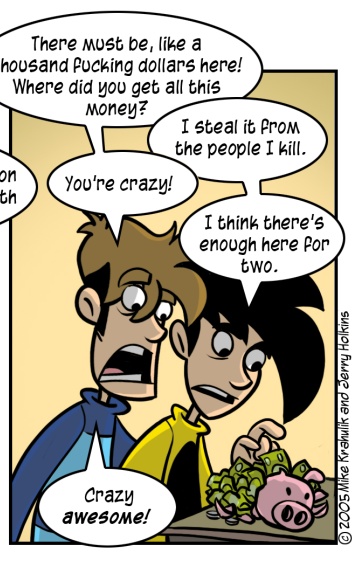 Reactions to the Xbox 360 pricing have been all over the place, most of what I've seen is bad, but at the end of the day I doubt it really matters. People buy what they want to buy, even if it places them in mortal danger.

Gabe purchased his 3D0 for a total of four hundred dollars, and this was money he earned dodging golf balls at a driving range, so the true cost to him psychologically must have been profound - and he still managed to, for good or ill, make that shit happen. We played our Wing Commander and felt like we were on the cusp.

I think the Xbox 360 is at least as cool as the 3D0 was. I also think that four hundred dollars is too Goddamn much - in any event, it's widely considered too much by those who will buy it anyway - but the three hundred dollar model isn't worth it at all. If you're ever planning to get

a wireless controller, a remote control, a hard drive, hook the machine up High-Def, or play on Live

and you try to piece that stuff into (what they call) the Core System, the numbers don't work. I mean, look at those prices. At the very least, you're going to need their forty dollar memory card. The lower cost "sku" isn't for the "Wal-Mart" consumer, it's for fucking retards.

I'm not trying to push you into the high cost option, I'm confident that the average Penny Arcade reader has been making sound, informed console buying decisions for as many as twenty years. I'm trying to say that their low cost option doesn't actually exist.

The "hard drive: optional" scenario is unfortunate, because I believed them last generation when they said local storage was critical for a modern, Internet capable system. I also watched as even the Playstation 2, the undisputed victor of the last generation, still wasn't able to make a fixed disk work as a peripheral developers would utilize. If they want to distinguish options for the system, there are many other peripherals to do it with outside of base functionality. Of course, they would say - as they have been telling developers for a year - that the machine minus the hard drive is the base system. I'm not saying that is out and out sophistry, I think it was a pragmatic decision - the original Xbox was an expensive experiment for Microsoft. The scenario is just suboptimal.

Honestly, when this x850 I have is no longer sufficient to play the Games Of The Future (I give it a year), I had hoped to retreat into consoles altogether, a land of relative sanity. I don't think this is a step in that direction. Dave Perry said some things in this Next-Gen article on 360 pricing that made my blood run cold, saying the PC is the model consoles need to be shooting for, upgradable texture memory and physics units and God knows what else. Jesus Christ, you guys. You're going to drive me back into tabletop full time.

what have we done to you