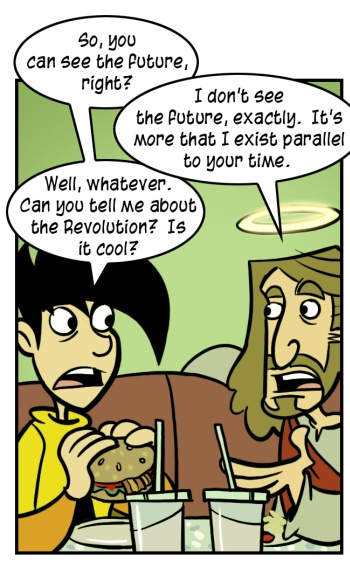 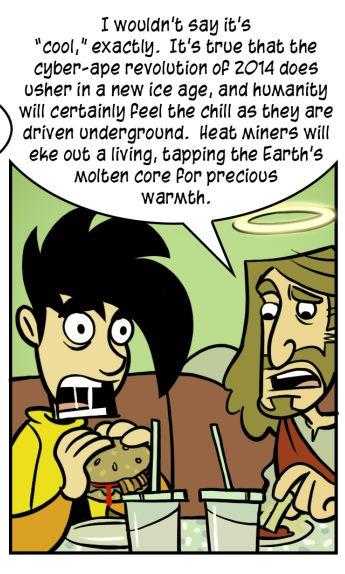 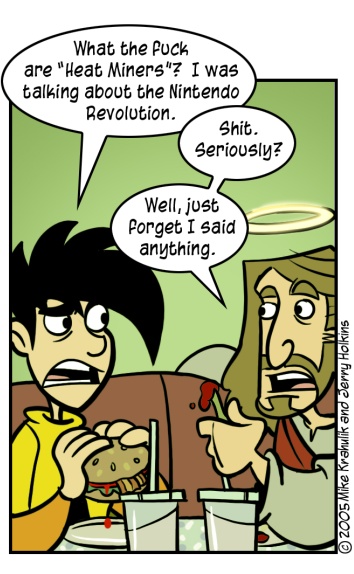 We actually completed the comic on stage, a process Gabriel assures me is terror itself, but he's at the doctor for a kind of pain I had never heard of, so getting ahold of the strip is difficult. It does feature the Messiah, and I hear some of you are into that. At some future point, this link will connect you to the strip in question, which I have entitled "Savor The Savior." It's not about holy communion, but I can understand why you'd be confused.

It's only been this morning that I can even remember discrete events from the last three days. I've long assumed that it was the crush of humanity and my manifold neuroses that dilated my perception of time, but I'm realizing now that it's the various means of consciousness extension I employ to maintain vigor. I don't even know if I'd call it consciousness. Your brain just shivers in there, and the body moves on its tether. My mind feels like it is slowly emerging from a vat of warm honey.

It is getting harder and harder not to shape PAX attendees into an regular fighting force and take Bellevue city hall. It's right there. Plus, regular fighting forces are sweet. If we print the PAX 2006 shirts on kevlar, I think we'd basically be ready to go. Last I heard there were about 7000 people there, which seems more than sufficient to take that town - Bellevue, a place that has perfected a kind of lethargy that actually intense. You don't want to congratulate them, but at the same time you do want to recognize it.

I would really like to thank our noble Enforcers for taking on the black and enabling an unbelievable weekend. I will come and help you lift heavy things as soon as I finish this post. The OmegaTechs who ran the Omegathon ran their asses off setting up the ultimate videogame competition, and they have my respect. What's more, this year's batch of Omeganauts was amazing - we congratulate Coreside on his victory, and we welcome back LeRoy as an Omeganaut next year. More than that, the attendees catalyzed the best convention I've ever been to and very probably created a kind of social movement. Thank you so much.

we are leaving together