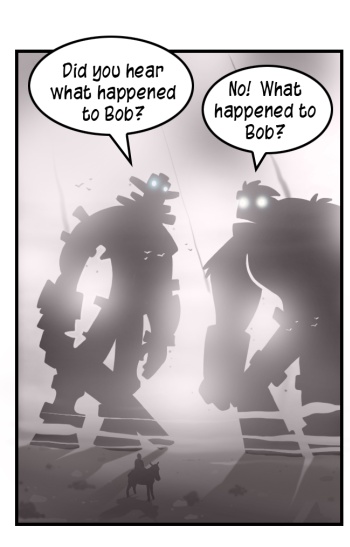 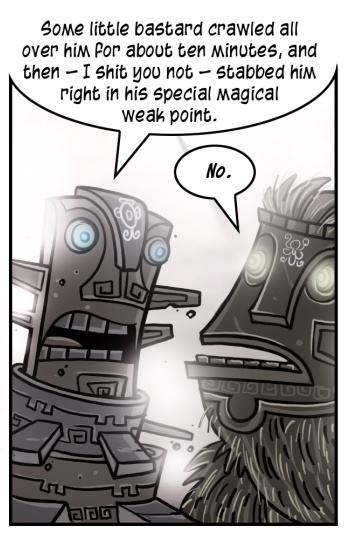 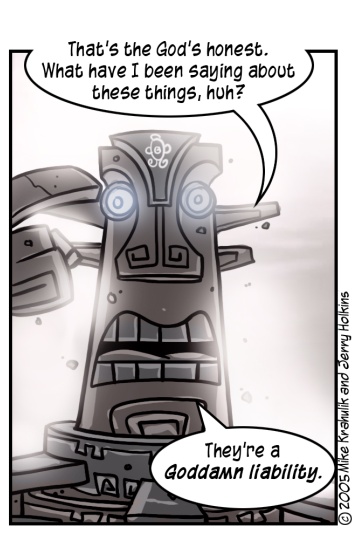 Been playing a fair bit of Shadow Of The Colossus, and while numbers high in the available range reflect some portions of my time with it I would not describe the texture of my experience as uniform. The experience has sometimes been less than satisfactory for the colossi also, as I'm sure you can imagine.

A game made entirely of breathtaking boss battles is not unwelcome, to be sure. That's unorthodox. What's more, the "bosses" and your interactions with them are almost certainly exhilarating, when Shadow's camera is accurately displaying game events. As the game continues, you become more and more familiar with the somewhat strange control scheme set before you. It isn't that they're commands you're unfamiliar with - for example, you don't press the triangle button to drink a glass of milk or something. They just never feel quite natural. It's exaggerated by a sometimes wayward camera and a willful steed. I understand why things are the way they are, size disparities are pretty much what the game is about and the fact needs to be emphasized at all times. If platforming this awkward and weird were in any other game, I wouldn't tolerate it.

In the same way that Blitz: The League is an an acerbic appraisal of the NFL, Shadow of the Colossus feels like an indictment of gaming as usual in many ways. There are elements of the story that are ambiguous from the outset, not because the story is being told poorly but because the situation you find yourself in and the powers you come into contact with are not drawn with absolute clarity. So while you go through the ordinary motions that we associate with videogames - discern objective, eradicate opposition, return for reward - you're engaged in a series of acts whose moral virtue is by no means assured. The supposed hero is assaulting majestic, sometimes docile, sometimes curious, sometimes sleeping creatures. They're almost all portrayed in a sympathetic light at some point, and it's hard not to feel disgusted at times for iterating Hollow Game Mechanic X by rote without any sense of the moral spectrum the acts inhabit.

The game needs to be seen by every conscious organism on planet Earth. And if that means that you must play it in order to do so, that is your cross to bear. I'm being facetious. Well, I'm being a little facetious. Thus far, the frustration has not been outweighed by the allure.

in your warm and darkened grave