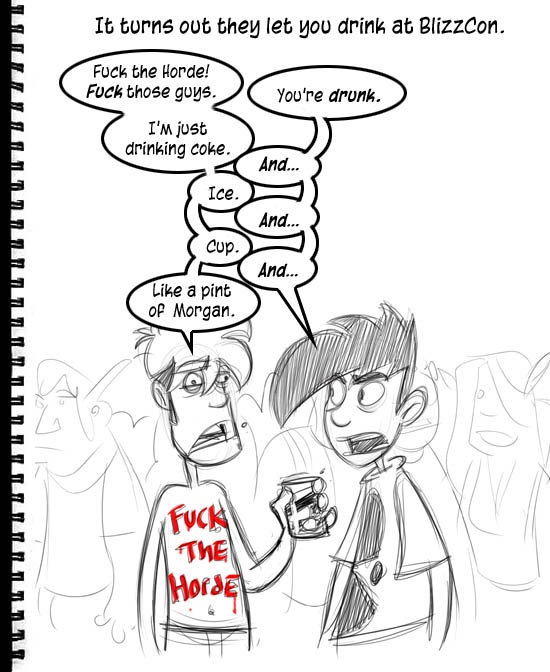 Blizzcon was a unique experience, not leastwise because they had a series of cash bars centrally located. I would say that the tonics they had on offer placed a downward pressure on my equanimity and propriety both, but those virtues are rarely in ample supply. Indeed, stocks have been low for quite some time.

We spent the two days before the convention trying to wring the Alliance race for the expansion out of anyone with a Blizzard shirt, all to no avail. Eventually I stopped asking the question in a friendly manner and began to just shout the name of a possible race very quickly, tilting my head back to scrutinize the response in a knowing way. I would then claim to have "gotten what I needed" and bid them good day. They never did announce it, which was a profound disappointment, but they never said they would so I guess it's not reasonable or whatever to hold it against them. To be frank, I'm not actually sure they themselves know.

Grabbed dinner one night with Scott Kurtz, who you may be familiar with, and Kris Straub, who does Checkerboard Nightmare and Starslip Crisis - comics I've made time for every update since their their inception. We also saw Gus, who be famous on the real.

We also met many brave Fancy Lads, Keepers, and Knights over the two days, which was a pleasure. A convocation of all the Dark Iron PA guilds got in line early Saturday to give us a shot at an AB run, and three and a half hours later we were in. We got split up early and things went south. The characters were decked out in the fantasy equivalent of Name Brand Clothing, things sparkled and shone almost everywhere, so the shame of our defeat was great.

Were sploitz involved? I wonder.

Blizzard held an amazing silent auction for charity featuring original works in pencil and on canvas by their legendary artists, the proceeds of which broke seven thousand dollars and were donated to Child's Play. That's amazing, and it's only the beginning of this year's event.

For the longest time we were content to swear and be wry about the way our media covers the people who make and play games, and a couple years ago it became clear that this was insufficient. That mission still exists, but after two years of running Child's Play it's been supplanted by the intense satisfaction inherent in a charitable act. The original mission seems sort of crass and mechanical to me now, we'll let that take care of itself. In the interim, we will be the people who - individually, and in aggregate - simply solve the problem.

but i don't think so