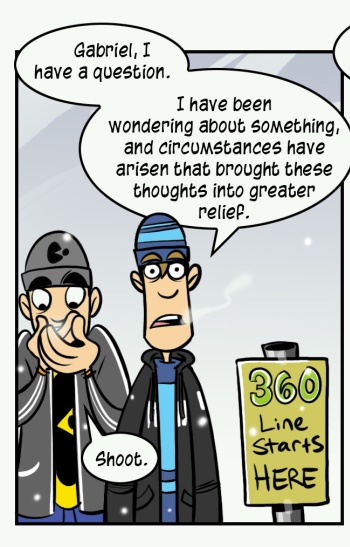 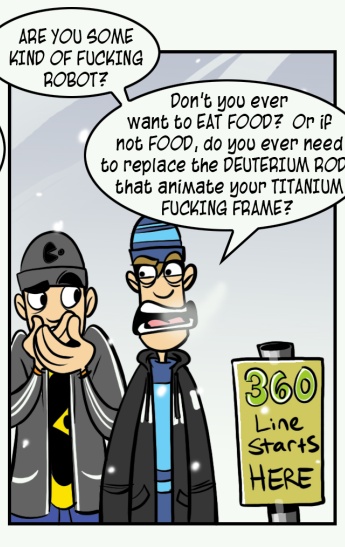 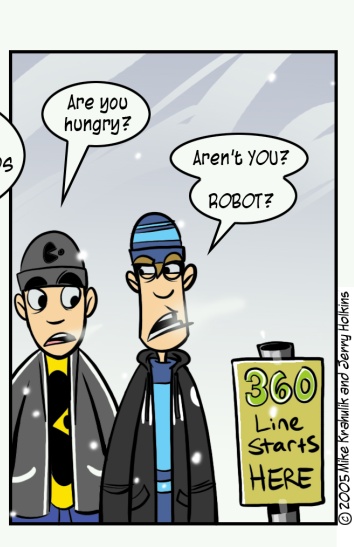 Spending all day with someone who has a radically different metabolism is a catalyst for conflict. Outside of the occasional Pocky or Hello Panda, I believe the last time I saw him eat something was a single square of Caramello. This would have been in '97.

We only have access to the 360 games that got to stores early, and outside of a single clandestine, wholly unauthorized, actually somewhat romantic night of access to the entire lineup I simply don't have the breadth of experience you can get elsewhere. If you want a quick rundown of a few games, you could do a lot worse than to check out bapenguin's list at Evil Avatar. Even if I had the sports games, which I don't, but let's say that I did - I'd still be in no position to tell you anything useful about them. There's an entire culture associated with professional sports and their impenetrable lexical force field that has long kept me at bay. You can, of course, download demos of them right to your Xbox, provided you are not saddled with the core system. That's what I did, and it became immediately clear that my key-related infractions were injuring the "flow" of the event.

I think I may let Gabe handle Tiger Woods, if he has time - the short version is that we're both pretty happy with it. I know there's a next-generation Links on the way that we'll probably see at E3 - but there's a respectable number of traditional gametypes here, and I didn't see any Hardcore Extreme-type fluff like skate ramps or uzis. We've also been extremely impressed with Call of Duty 2, port though it may be. It turns out that Port plus Widescreen plus 5.1 plus Voice Support plus More Than Capable Conversion To The Gamepad plus Dependable Framerate equals what I would gladly call the definitive version.

I've only played Kameo in split-screen co-op, but that is something I will readily vouch for.

It was Rallisport and PGR that really got me into racing as a genre, I may have said as much, so obviously PGR3 was high on my list - and it's incredible. I haven't played it enough to say that it's a ten out of ten, because when I play PGR I tend to race the exact same track over and over until I feel like I "get it." I'm not there yet. But the presentation, the physics, and the unified online experience they pioneered in PGR2 represent a pretty sophisticated racing experience.

The high point for me thus far has been Condemned, a true exclusive that that doesn't really have an analogue anywhere else. It's essentially a "psychological thriller," but they've manipulated the player perspective in interesting ways thus far. I'm only a couple chapters in, but it's my focus at the moment so that's sure to change by tonight.  I'm told that (like F.E.A.R.) there are some recycled environments, and that the melee combat gets repetitive by the end - but the environments they're repeating look pretty Goddamn good all told, and they've managed to maintain my curiosity. Plus, if firing a taser at a savage vagrant is wrong, etc.

The thing to keep in mind with the 360 is that it has another "launch" of sorts early next year, when games that couldn't respectably make launch hit. I have faith that you'll enjoy the system if you've preordered it, particularly if you're "rolling" in HD - things like turning the console on or off with the controller, the classy user interface, and the almost perfect network functionality cement that it is a valid, complete platform - but I think it's hard to make an absolute case for it based on the raw lineup if you aren't a sports fan. Of course, I like it - but I don't expect a person without a slavish devotion to the passtime to get excited about something as ethereal as "user experience."