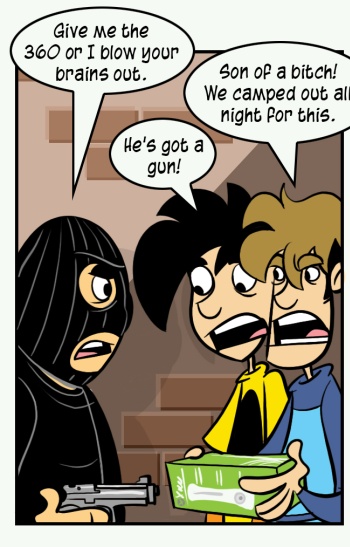 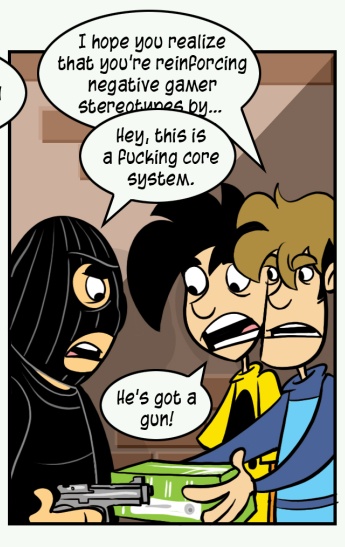 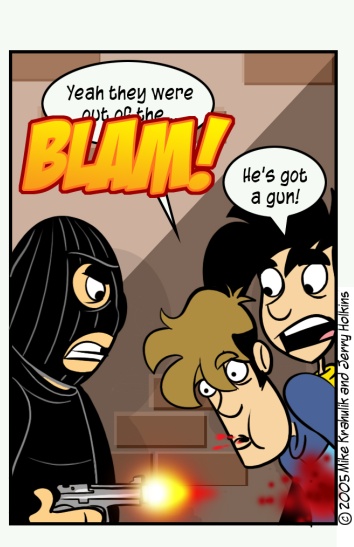 Tycho had some business to take care of yesterday. Nothing bad I assure you, but it will keep him out of the office for a couple days. I was there working on page six of our Prince of Persia comic and eating imported Canadian candy bars (such is the life of a web comic creator) when I realized that it was a strip day. Fear immediately gripped my heart as it suddenly occurred to me that I would need to make the strip myself.

Generally the act of creating a Penny Arcade comic is a collaborative effort. Comics are actually built out of conversations that Tycho and I have either while playing games or reading over news sites. We just sort of go back and forth until we start to laugh and then we build on that idea, whatever it was. Alone in our office I had no such luxury. I tried calling our business devil Robert in but his creative ideas tended to revolve around mentioning our Xbox 360 skins in the comic so as to promote them with greater efficiency towards our target demographic. Bless his heart, at least he tried.

Eventually I managed to produce the comic you see today. I can at the very least vouch for the art. I may end up creating Friday's comic on my own as well. I know this is hardly ideal but I have an idea that I think will help get us all through this.

I know it's not Christmas yet but I want you all to imagine that you've been startled awake in the night. Before you stands a tall hooded figure, the ghost of Penny Arcade yet to come. He takes you to a modest home on the east side of Lake Washington. Through a frost covered window you can see me, working alone at my computer. On my monitor you can see today's comic as well as one or two others. After reading them you turn on the ghost and drop to your knees. Your hands grip the stiff folds of his black robe and you cry out.

"No, Spirit! Oh no, no! Assure me that I yet may change these shadows you have shown me, by an altered life! I will honor Tycho in my heart, and try to keep him all the year!"

As you raise your hands in a futile prayer the space around you swirls and then resolves itself into the undisturbed furnishings of your own bedroom. Once again you are alone in bed and the clock on your night table tells you that no time has passed. Let your head find that familiar pillow and close your eyes. Tonight you will dream of masterfully composed news posts and frighteningly natural dialogue. Tonight you will dream of Tycho.