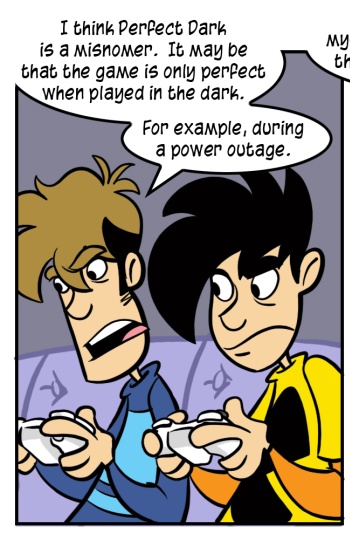 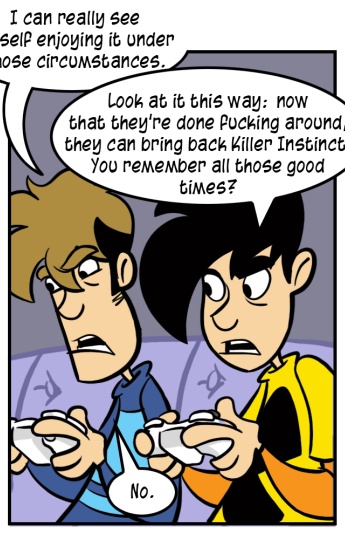 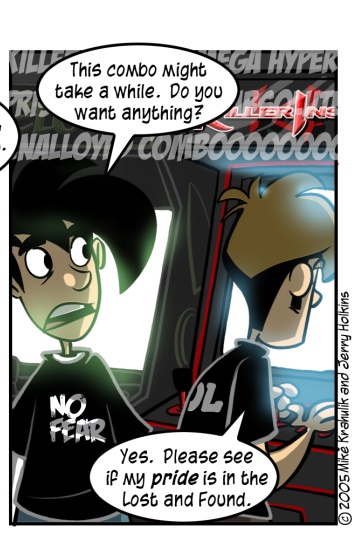 Gabriel and I have always positioned Killer Instinct up there with our favorite fighters, though our tastes in the genre have become so refined I don't know if its simple pleasures would still provide us succor.  If you were not a proponent, let me then explain that you could "buffer" a combo so large that you could literally walk away from the machine while it made your grisly design manifest.  Tons of fun, and made for the kind of Arcade Rivalry that has by now become shrouded in memory.  I presume the modern equivalent is to "get served" whilst a young man whirls on a piece of greasy cardboard.

I don't really know, I heard that was a show they have now.

Moving on though, I genuinely cannot tolerate Perfect Dark Zero.  I still hope the thing sells like gangbusters, because it's doing some things that need Goddamn done, Co-Op over live in a full campaign specifically - in this regard it may yet serve my dark purpose.  I have played a couple missions in, however, and I am fairly certain that I'm just going to leave the rest on my plate.  This is one of the least tactile shooters in history.  Coming off of games like F.I.Z.Z.E.A.R., where every shot feels like a real "thing" in the environment - "that's how you know it's working" - I don't really feel anything when I engage these wooden, strangely articulated foes.  It may be that the multiplayer is the vector for whatever virulent brain flu makes a person rate it a 9.0 - I couldn't tell you.  But the days where I can sit in front of a screen, toiling over a game until it reluctantly gives up its candy center are over.

Sword of the Stars thinks, as Weird Worlds seems to, that space empire games could stand to be less mechanical and more actual fun.  It has the things you crave vis a vis stellar dominion, such as plump tech trees, constructible ships, virgin worlds, and starlanes between them, plus the kind of gregarious, Hollywood space combat we don't usually associate with the sometimes ponderous genre.  Kerberos - a new company made up of development veterans, boasting the core of the team that made Homeworld: Cataclysm -  have modeled each of the four races so that they actually move around the starmap in fundamentally different ways, which presses firmly my tabletop strategy button.  I thought it was a ways out, but I've just been corrected by a member of the team - it's only three months away, with a demo inside of the new year.

the mark will show