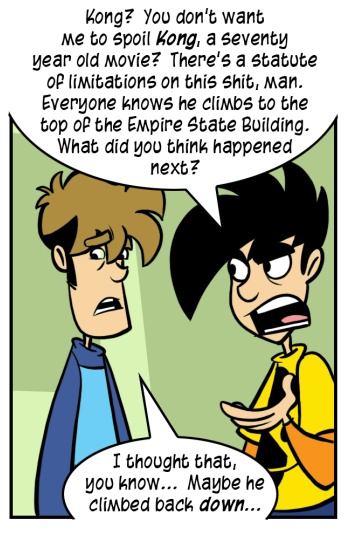 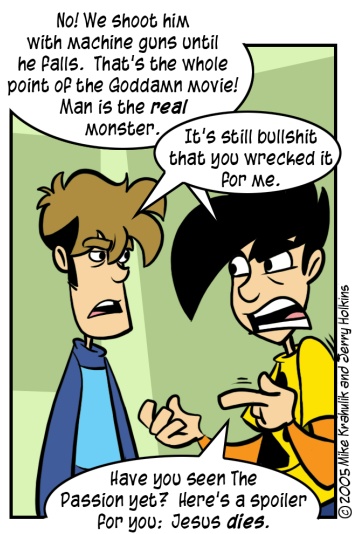 It's true, I've never seen King Kong - so while his revelations were spoilers in the classic sense, it's hard not to argue with his logic.  His logic.  Gabe's.  There are things one never really expects to type.

This isn't the first time I'd observed some tiny scene in a movie and felt like I could extrapolate the film, somehow.  King Kong was a movie about a monkey making his crazy way in the big city.  I'd never heard of any Skull Island.  Hair was also this way.  I was with it.  They were dancing in the park, it was the Age of Aquariuuuuuuus, I knew about that, and then bam - on the plane to Vietnam.  I also thought I had a pretty good fix on the Sound of Music, indeed, the hills were alive with it, but they go right from singing about whiskers on kittens to a bunch of Goddamn Nazis kicking down the door.  These are pronounced shocks to a young man such as myself, frail of constitution, given to bouts of tremors and glossalalia even on a pristine summer afternoon.  The idea that even The Sound of Goddamn Music played host to a writhing core of evil was simply too much for a mind already taut with those horrors which, if named, would spring as if from the very sounds of their naming unto a sleeping world.

So, if Weird Worlds is like a vacation but in outer space, and Sword of the Stars is like playing Space Captains after school on the Jungle Gym, then I think that I can step forward in this trajectory by saying that Galactic Civilizations 2 is probably something like going to work.

As you may recall, I loved the first GalCiv - so I was only too happy to pre-order the second one and gain access to the beta.  That is, until I remembered that I don't really like playing betas anymore.  I used to live for them, several installed simultaneously, here we go, but some internal shift ocurred at some point and now I prefer to play finished games.  Weird, I know.  Oh, and also, the beta for Anarchy Online destroyed my Windows partition, which did sting a bit.

GalCiv2 is, I think it accurate to say, en route to being the definitive star empire simulator.  They're rarely made anymore, which I suppose improves the odds.  More than that, however, is that Stardock is focused on making a full-fat, no excuses, honking angular Imperial Throne for you to recline in and manage your worlds.   I think it's understood that if you want to succeed with this sort of thing, concessions need to be made to the market gods re: mechanical complexity.  They are pretty much telling the market gods to go fuck themselves.

no stumbling pilgrim in the dark