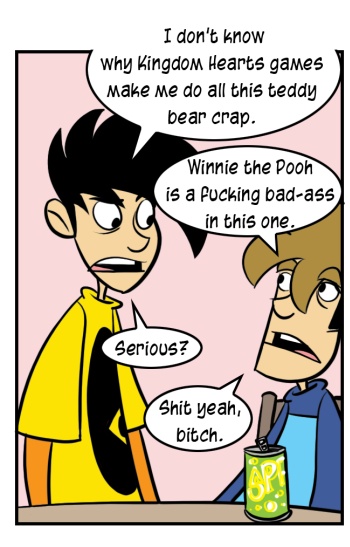 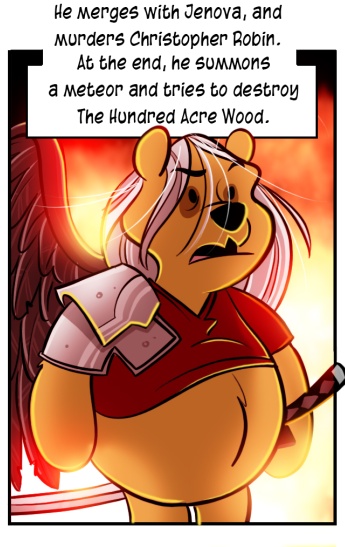 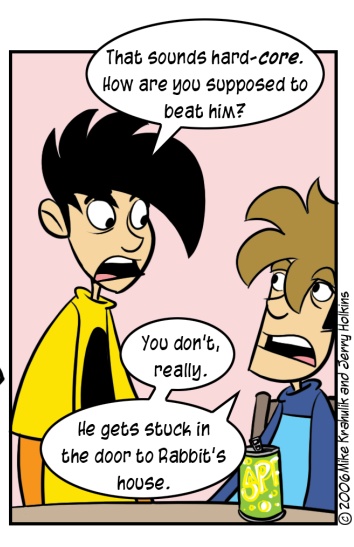 We played Kingdom Hearts 2 for a few hours yesterday, enough to know that they were pulling some odd narrative tricks that had us intrigued, but after a couple more hours today we were sort of wishing that they would begin the game proper. We're quite aware by this point that "shit is all crazy." We did hunt down the pop track which accompanies the introduction, though - at the most recent count, we have heard it twenty-three times. That would be twenty-three times today. And we are on the slick precipice of a twenty fourth.

Some of my first reading for pleasure featured Pooh, Roo et. al., and so their inclusion in the Kingdom Hearts series recalls (for me) a youth wisely invested in books. This was not true for my cohort, for whom that many words colluding in one place no doubt represents a kind of conspiracy. As one of a howling pack of wild boys, Gabriel was happy if he could find a stick still coated with nourishing bark.

I let him in on some insider information that did seem to invigorate him somewhat.

My DS Lite finally arrived, and it's close enough that I can pat it gently - like a loyal pup. Even Brenna (who reviles the totems of my lifestyle) finds it attractive. I have a fondness for the current hardware because of the positive experiences I've had with it, but if there is a more workaday chunk of consumer plastic I've never seen it. It's hard to imagine that someone wanted it to look like this on purpose, especially given the care given to every contour of its luminous heir.

I had seen every picture of the new machine released on the web, watched every video, and I was still not prepared for this pygmy iteration of the device. What made the other one so big? I think this is a fair question. Is there a man inside? What is in there? Perhaps it is like one of those creatures that inflates when it feels threatened.

Someone over at Cheap Ass Gamer picked one up at about the same time, and there's a thread full of photos where he answers reader questions. It is so thorough that I hardly know what to add. To my mind, this is the actual DS and the other one is a ragged impostor - I feel like that strikes the proper tone. I can tell you something I haven't seen elsewhere though, something that will be important to you if you decide to replace yours after the US launch or for any other reason. Your online identity is tied to your specific DS, and I know how to transfer that identity to a new piece of hardware. I thought the mechanism they used was kind of clever, or else I wouldn't make a specific point of it.

There are things about the way online connectivity works on the DS that are, for lack of a better word, "eccentric." When you realize that he entire setup is designed so that there will never be an article like this one, and that the safety of children online trumps all other concerns - ergonomics included - you can usually find it in your heart to cut them some slack. At its root are a) Friend Codes you exchange, and b) the unique hardware ID I mentioned previously. Every online capable cartridge has a menu item that puts you into their "Wi-Fi Connection Setup," which was focus tested until you could drop a penny on the touch screen and get online. In the options menu, the bottom item actually broadcasts a program to another DS using the "DS Download Play" feature I've discussed before, only instead of a game it's sending a program to facilitate the transfer of your network configuration. I found this crafty.

what's left of me now