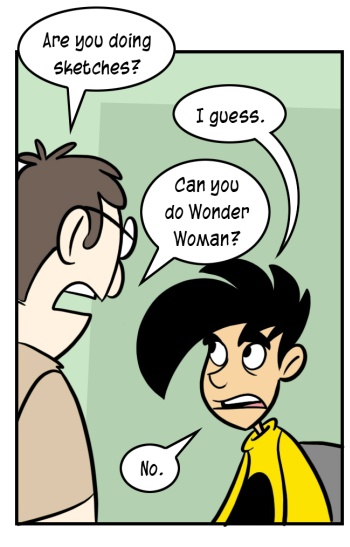 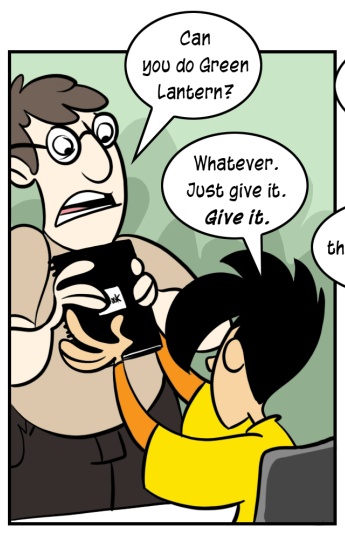 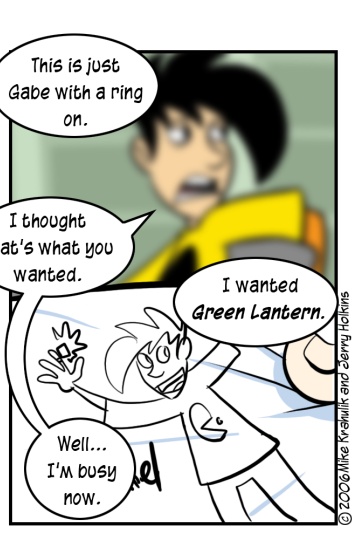 There may well be an documented mental condition brought on by the lights they use in convention dealer rooms. There is something in the nature of those lights that makes a person's skin look like a thin, greasy film, and if you look closely you can see blood being pushed through their body. After two weekends of this florescent hell, typing here in the dark basement - bolstered by The Earl - I feel as though the long recovery may begin.

Gabe will happily draw any character from the strip, provided you have something to draw it on. If you have a theme sketchbook or a reference, provided the line isn't too crazy he can hook that up immediately - if you can leave it and come back later, this is also an option. I have seen him try to steer things in what you might call a "Gabe Direction" though, not as bad as he does in the strip, but there you have it. After we'd finalized the dialogue, as if on cue a man came to the booth with a Green Lantern theme book. Scott had drawn his troll Skull garbed in the raiment of the Green Lantern Corps, this might even have been last year, and so a picture of "Gabe with a ring on" actually worked pretty well.

I was overjoyed to find that the young women who create Serves You Right - a webcomic about foxes, and squash, and many other things - were situated in the Artist's Alley, and being so positioned were able to provide me with a sketch of Cody. We also talked briefly about Latin Roots. In gratitude for the considerable amount of free entertainment they have provided, I picked them up the first two volumes of Scott Pilgrim, because these books are pure sugar whose appeal is very nearly beyond mortal tastings. Their mom was there at the booth with them, in the way that a proud parent of another generation might have cheered on a sporting event. It seemed important, somehow.

I had met Corey Lewis at another convention, and he was very cool, but I was not aware just how cool he actually was until I bought his book Sharknife. I know now that the man plays it cooler than a polar bear colony. I'd seen his work on the Street Fighter comic, and it looked great, but when he's on his own shit I would describe his work as alchemical: he has derived the secret of turning paper and ink into gold.

Also got a chance to hang out with Jonah from Random Pirate Comics quite a bit, largely in a Meteosian context, and I can say without exaggeration that he is as worthy an opponent as I have ever faced. I took away one round out of (I think) five, which is not anything to be proud of, but since every victory in Meteos is literally an intergalactic pogrom I think it does cast him in a somewhat negative light.

The DS Lite was something of a hit at the booth, it alone probably drew a hundred people over the course of two days. Its attractive design and vibrant displays were not able to help me claim victory, but it felt good to know that I had the superior hardware. When I said I didn't know why the other version was so large, I was being facetious - I've got a very good idea why. I think it was important to them that cartridges from the GBA fit flush with the system. When it became clear that people were playing DS games on their Nintendo DS, I think it gave them license to rethink that "necessity."