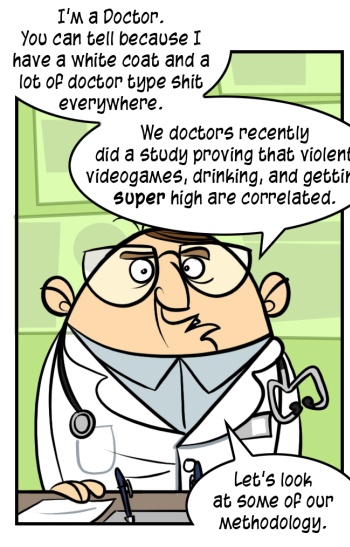 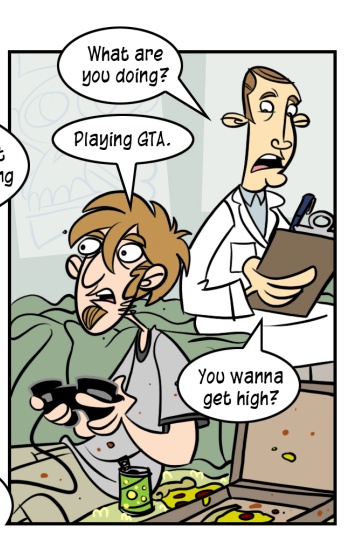 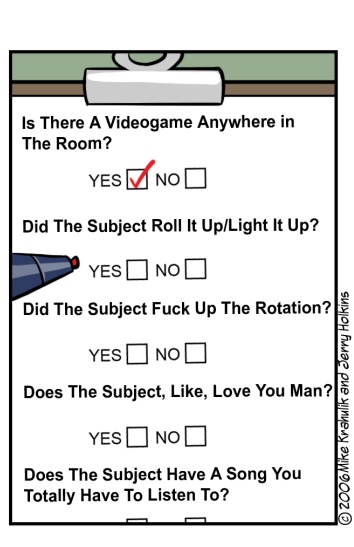 Are there no depravations to which you gamers will not descend?  No sin you will not contemplate?  Is there no injury, sir, is there no damage you will not scratch into the edifice of decency and right living?

Oh, yes - your "lifestyle" is known to me.  Your craven questing.  Your hunger for heathen "points."

I know about the Black Mass that takes place on every third map of cs_militia. You deny it? A just society would corral you. A nation truly in possession of its moral compass would launch you into space - acquaint you with those alien races that so dominate your petty entertainments.

As if we did not have reason enough to implant subdermal identification in each of you, in this briefcase I hold a study that connects violent videogames with increased drinking and marijuana use. Oh wait! It doesn't actually say that. What it says is that people who just played a violent videogame have a tolerant attitude toward those behaviors. Is that the same thing? Shit, man - I'm no scientist.  But if you told me that young men just starting to make their way in the world sometimes obliterated themselves through various means, you would not be telling me something I did not already know.

In any case, the methodology of the study seems suspect.

Based on the demos for 360 and PC (plus a respectable metareview), it seems like Tomb Raider Legend would probably make for a respectable purchase. I'm not terribly surprised. As soon as it became clear that Crystal Dynamics was behind it, I had faith that it would be competently managed at the very least.  The gunplay is pretty straightforward, by which I mean banal, but if this is supposed to be a return to Lara's "roots" than boring shooting and big gears are really the order of the day.

It does present some odd trade-offs, though: outdoor performance on the 360 version is all over the place, but the light effects on ancient machinery indoors had a visceral effect.  The PC demo didn't have those surface effects I saw deeper in the eponymous tomb, presumably that's what accounts for the extra hundred megs, but the readme claims those will be in place for the retail release.  The text is much sharper throughout, but without a widescreen monitor I'm missing the real estate that gave me such powerful vistas on the console.  And now, we come to it:  the PC version is a full twenty dollars cheaper.  I can rationalize up to fifteen dollars of cost, but grabbing it for the 360 is a tough sell when it seems to run smoother on my Goddamn iMac.

Also: the PC playable had a tantalizing menu item, one you could not select, entitled "Next Generation Content."   I have never wanted to click anything so much in my entire life.

this car needs a young man to own him