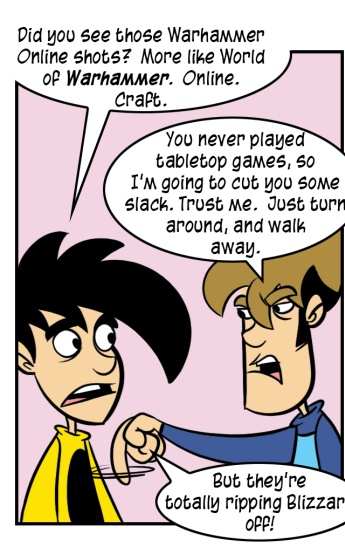 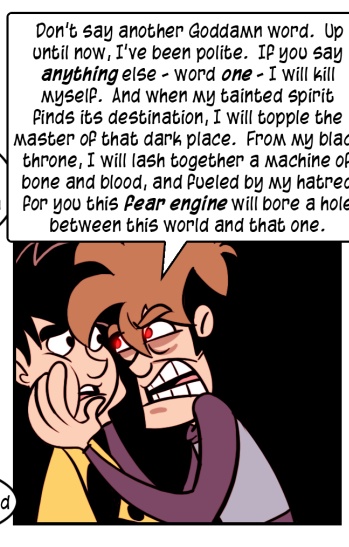 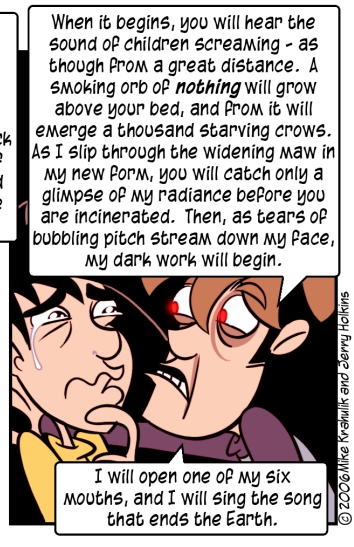 On forums of wanton reputation, I sometimes hear that Games Workshop - Games Workshop - has stolen this or that from Blizzard, and that odious charge will only grow in volume and intensity as screens and news of Warhammer Online achieve wider circulation. There is no small amount of danger involved in presenting this notion: as proof, I offer Exhibit A.

A charitable person might call the many points of continuity "homage."   These days, I think Blizzard genuinely owns their contexts to a much greater extent - there are what I would call "significant" story innovations in Warcraft 3, Brood War, and World of Warcraft that assert their homegrown narrative power.  As Games Workshop has begun to license its properties in a more measured, "skilful" way, it'll be interesting to see how well they actually do against the worlds they inspired.

You've probably heard about Red Steel, right? No? You might want to.

I haven't heard a lick about this, and you'd be surprised at some of the information that gyrates before your humble host on his simple terminal. Wealth beyond wealth, fonts of secret data, riches beyond even even the reveries of draconic avarice. I have people situated at some point in the development cycle in almost any company you'd care to name, Ubisoft included, and I've never heard anything about a Yakuza-themed game with gunplay and sword fighting controlled by the "Revmote," where sparing enemy lives is a crucual part of gameplay.

All the images from the article show the controller deployed in the "nunchuck" style, analog adapter in the left hand, gun tilting in a gangstafied manner according to your own wrist. The fantasy, of course, is that you could play it with two Revolution controllers, two independently aimed weapons, but we're probably getting ahead of ourselves. It's pretty strange that the first expose on a Revolution title would be for a bloody gangster game where your hand literally directs a firearm - it seems like bad press packaged "to-go." But we're all pretty inerested in the machine over here, and that was when we thought we'd just be playing competitive squash or chopping virtual victuals.

One last thing: if you're playing Oblivion on the PC, I can't recommend the BTMod enough. It has optional funtionality to hide destinations and whatnot from the minimap, creating the world's most robust lost in the woods simulator. Its basic function is to bring the user interface more in line with what you might call a "PC Centric" experience - exposing more than twice as many items in lists, for example. It's one of those mods that is so pure in its purpose that it now seems like the correct vision for the game. I imagine that most of you are already using it, but if there is even one person out there shuffling through the jumbo menus of old, we are all diminished.