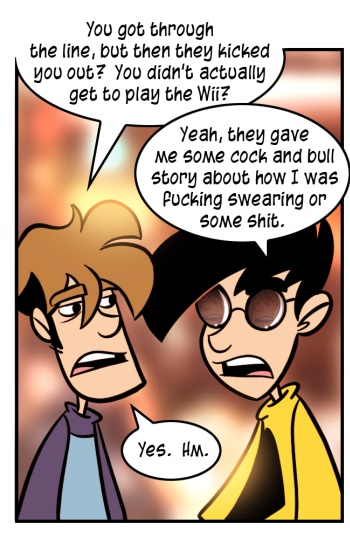 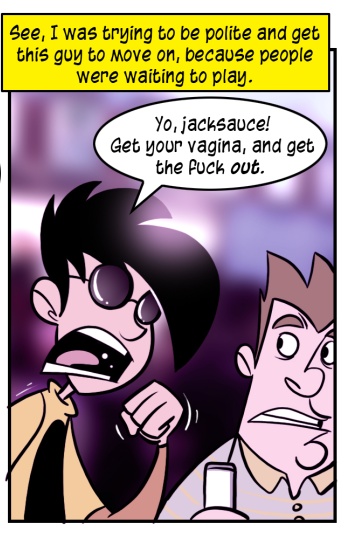 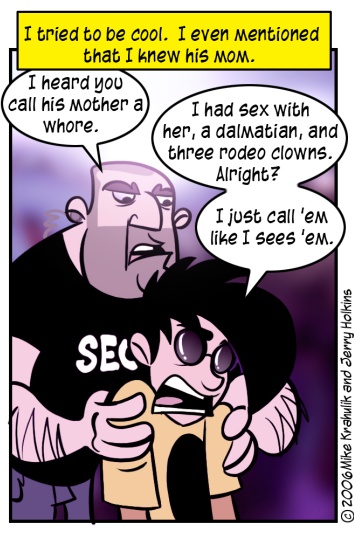 You might recall that by Thursday of last week, despite actually braving the line and entering the inner sanctum, I had still not had any kind of satisfactory experience with Nintendo's "new generation" gamble. That is no longer the case, at least, it is no longer the case for myself: I understand that Gabriel did encounter some difficulty.

Telling you what you want to know may be difficult, for a variety of reasons. For one, people want to have their predisposition toward the device to be correct. If you would someone to say that it was an ninety-nine percent solution of awesome, or that perhaps it will be "poaned" by the PlayStation 3, such content is available - but it is not available here.

I think it is a function of what we do at Penny Arcade, but there are people who want very much to tell us things they shouldn't. With a level of credibility I originally associated with a schizoid vagrant, we were told that "all showfloor games were actually running on GameCubes." I've chosen not to really integrate that kind of information into my impressions. One developer told us that the demo units had the sensitivity on the remotes jacked up to some ridiculous degree. No doubt when the device is in your own home, you calibrate it the same as you would your DS or any other non-standard input. I relate this item with a bit more confidence. Add that to the fact that every video of people playing the system shows them utilizing gross motor movements and generally behaving like spazmoids, and you have a scenario where their own promotional materials have taught every person to play it wrong.

Let me tell you how to do it right, just so we're all on the same page: you need to relax. You are not trying to rein in a bronco, at least, not until someone makes a game actually based on bronco reining. This was the trick I needed to get down before I understood how to play. Elbows loose. Wrist loose.  Relax.  I wasn't aware how tense I usually am when playing games.  This is a marked departure.

I should tell you that, as a general rule, the games did not look amazing. The Cube was rarely made to sing as it did in Resident Evil 4 or Crystal Chronicles, but it was capable of bold feats that were rarely coaxed out of it. You might recall the Red Steel shots that hit along with those old scans, tight, crisp images that bolstered the faithful, and I'm here to tell you that it ain't that way - not yet, at least. You knew that, though, if you've been following this thing at all. You know that we're talking about an incremental move graphically, and I think that most people have made their peace with it provided they're able to get something that genuinely feels new from the gameplay. I won't string you along any further: the Wii, when coupled with a visionary developer, is more than capable of delivering this.

Different people get "sold" on the device by different games, because playing the machine is so idiosyncratic. Having had the opportunity to talk to maybe a hundred and fifty people about it, Warioware - Nintendo's perennial gameplay laboratory - made converts of many people with its novel, joyous use of the wiimote.  Wii Sports was interesting, and I think it'll be an amazing piece of evangelical software to introduce people to the Wii, but I have a feeling that most Penny Arcade readers are looking for something with a little more beef.

I literally felt torn away from Super Mario Galaxy. I have told you before that I hate playing games at E3, that I believe a worse environment for the enjoyment of interactive entertainment could not be engineered on purpose.  Something pure managed to survive that hostile environment and find purchase, and when this son of a bitch hits a kiosk walk directly up to the machine and play it.  Visually bold and  reminiscent of The Little Prince, you will find yourself sailing from world to world, with and controls that actively reinforce that your hands themselves are floating in space as well.  Mario is controlled with the analog attachment, and the pointing device in your other hand essentially "helps" him in various ways by manipulating the environment.  A platform game where tiny worlds are the platforms while boundless space fills in the cracks essentially feels amazing.

Metroid Prime 3 won't startle you with its amazing graphics, because it doesn't have those, but what it does have is solid, traditional gameplay that is activated in inventive ways.  Using the accelerometer in the "nunchuck," you shove the controller forward to cast out the grapple beam.  Then, by pulling back on its analog stick, you can actually tear off things in the game world - iron doors, enemy shields, what have you.  I'd be surprised if they didn't change the pulling off into a gesture for the final release.  But what is a button press on any other system is now a physical motion with a mirror in a simulated world, and it feels good.

I loved the fishing in Twilight Princess, but without more "trigger time" on the controller I don't know if I'm completely sold on the Wii for this game.  It works, don't get me wrong, but I have a sense that it's being used because it's there, and not because it adds value like it does in the other games I've mentioned.  And, just as with the DS, there's going to be a lot of crap made by third parties who don't really know what they're doing - basic, boring games made unwieldy in addition by their inability to execute effectively on the new platform coupled with their launch window avarice.

Nintendo's PR message is pretty potent, and it resonates so well with us because we generally believe at some level that gameplay has taken a backseat.  Sony and Microsoft are involved in a kind of escalating arms race, along a radically different conceptual axis.  I happen to find the plump fruits of that conflict mouthwatering, but let's continue. There is something here, independent of the marketing machine, that deserves recognition and praise.

to do the bell thing