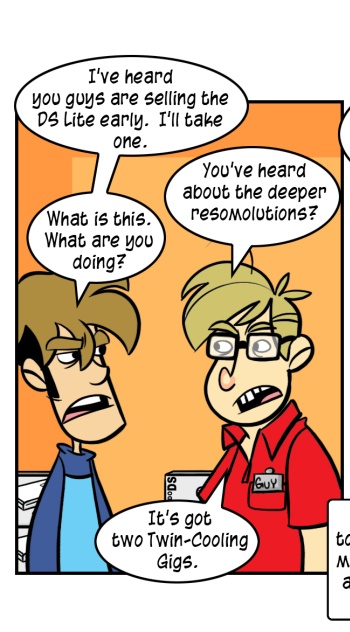 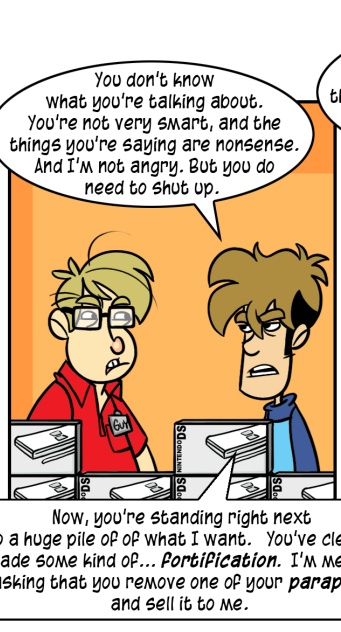 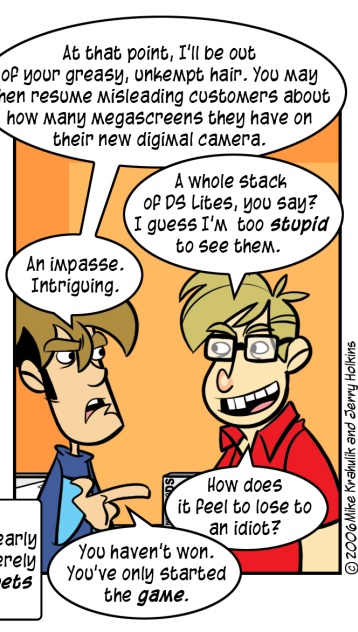 Before we claimed the High Seat, assuming the jewelled diadem that marked us as Internet Demagogues and merging into a single, irascible entity, Gabriel still managed to torment people - just in a more localized capacity. In his role as "computer specialist" (ahem) for Circuit City, he and his dark cabal would often invent functionality that did not, as such, actually exist in the machine, technology so sophisticated it could dismantle the strange forces that maintain our universe. He said he might arrive on the site later today, no doubt with his characteristic flourish and splendor, and relate for your edification a full accounting of his despicable acts.

This all came out when we were trying to write todays's strip, as the faceless caricature we'd invented to torment my alter ego began to take on a life of his own. Here it is, by the way. That strip we do.

While the "Big Three" home consoles shouted at each other, the DS and the PC simply had excellent, healthy showings without a lot of pyrokinetics or zero-g martial arts. The PC in particular shone, but the DS Lite is hitting soon, and as a result it's become lodged sideways in my brain. Just think: your patience for the US release will save you almost seventy dollars over my snap purchase. I don't regret it, but then fiscal irresponsibility is the only drug I allow myself these days.

You were probably aware that SquareEnix (I revile the Squeenix appellation) was making some kind of three on three basketball game for fuck's sake, but you might not know Mario Hoops: 3 On 3 was completely great. It takes a second to figure it out: D-Pad moves, and the stylus handles everything else. Want to pass to the teammate on the right? Flick the stylus that way. Want to move a little faster? Lightly tap the screen while you're moving to "dribble." Shooting is a line that starts from the bottom and goes up, and... Release. Outside of that, it's pure Mario: grab shells from coin boxes built into the court itself, swipe the ball with a downward motion, collect coins that (seem to) increase the value of the eponymous "hoop."

Like many other DS owners, we imported Ouendan (it has a longer name) - an extremely Japanese game about an all male cheer squad that shows up to keep people motivated while they deal with the challenges of life in Japan. It's a kind of rhythm game where you tap increasingly tricky beats in order, sometimes engaging in more novel (i.e., strange) interactions. This is all delivered in a lightly animated manga style that is... Well, it's delicious. The whole Goddamn thing is pretty much a sensation: you do need two carts to play multi, a rarity on the system, but in return you get co-op, competitive, and another competitive mode that has completely original art and stories. It's the sort of thing that won't come out here unless you import it, unless of course it comes out here, which is sort of what's happening: Elite Beat Agents is coming to the US and Europe, basically Ouendan minus the original Japanese Music, and the original cheer squad... Hm. I saw some guys from Pink Godzilla, a local import shop, and of course as import professionals they were scandalized by these desecrations. It's a shock at first, no question, particularly if you're already an enthusiast - the setting has moved to something that looks like America, the referenced "Beat Agents" have pompadours, etc.

I would have been sad mostly to lose the odd, irreverent sense of humor. Let me assure you that it is very much (to deploy hip-hop parlance) "in full effect." The "America" depicted in the game is viewed through a thick Japanese lens. It isn't the raw and alien experience you get from the classic import, no. But for all the English present, the perspective is no less foreign.