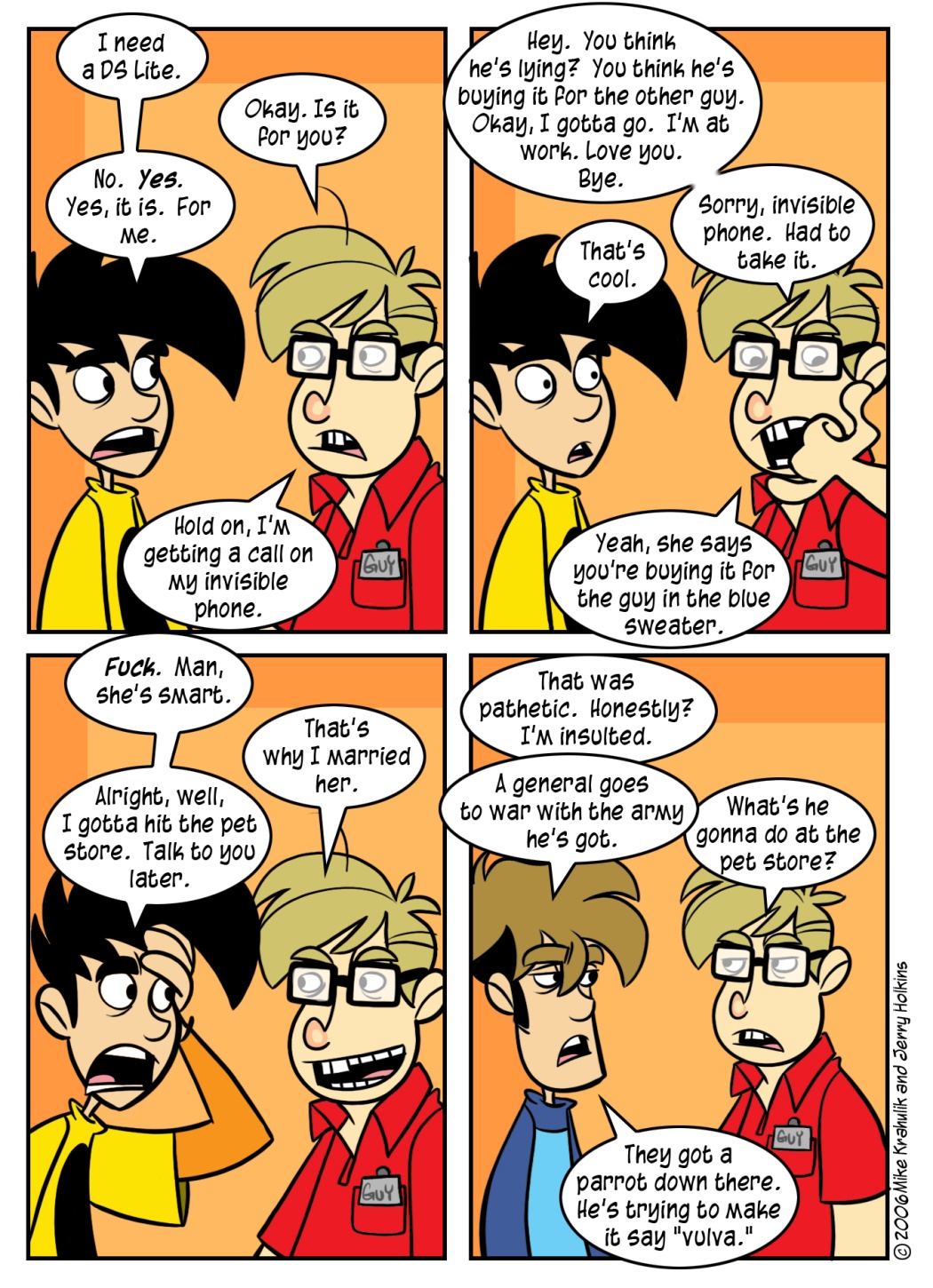 We wanted to do one more strip with that guy - Guy, I guess - and we have done so. I would be surprised if it continued, really surprised, but I'm not able to simulate the entire universe mentally. There may be some confluence of events that necessitates it. Since the DS Lite is now in retail release, there's no reason to endure those torments unless the struggle itself created, via some serendipitous mechanism, the bonds of fraternal affection.

Whenever I start these things, I always think that this will be the time I bring to it a sense of completion - but going through absolutely every game arriving for the DS ever sounds basically terrible. The PC as a gaming platform deserves much better treatment than I've given it, and good treatment it shall receive, but I wanted to present the idea that the goofy Nintendo mutation is still (more than) holding its own.

I don't think Big Brain Academy is a "prime example" of that law at work, but I do want to write about it. In this context, that gives it a significant advantage over other topics.

I was surprised to see how well Brain Age did in many reviews, as I put numerical calisthenics behind me when I left school and had no desire to resume the evil practice. Once I finished brutal, devil trigonometry, I refused all manner of mathematical instruction. As I'm sure is obvious, geometry - where you write stories about math - was much more my speed. Also, as regards Brain Age and not charming School Tyme Stories, its laughing polygonal head is the seed from which nightmares grow.

I should probably say that I suffered several shameful defeats in the game's "multiplayer mode," which is a ridiculously aggrandizing term for what it actually is. Have you ever wanted to do mathematical calculations really fast, against the clock, in competition with another, smarter person? That is not a multiplayer mode. That is my definition of hell. What's more, Robert was a business and math double major - the man is a fucking calculator. So wherever the "game" is not toil, it is shame. It doesn't spend a lot of time in the slot.

Big Brain Academy isn't about brain age, it's about brain weight, which is a very silly thing. It is very silly to weigh brains with logical and mathematical tests. I didn't realize it until now, but I think I probably like it better because I'm better at it - I think it's weighted more toward the spatial stuff and less toward raw computation. There's no question that the presentation is superior to Brain Age, which is really a kind of electronic workbook and as such merely needs to simulate blank paper. BBA by comparison actually looks like a game, which, as a website that covers games is something we take very seriously.

The multiplayer mode is also considerably more sophisticated: indeed, it is the entire game, all the puzzles, with multiple levels of difficulty. You set a weight goal, and then up to eight players (on a single cartridge, even) work toward it through a cognitive decathlon type thing. It has a raw calculation test as well, but the equation is actually written out in English, which brought my performance against him up from "the shame of all the earth" to merely "embarrassing (caught having sex w/ vacuum)."

without a trace of dissent