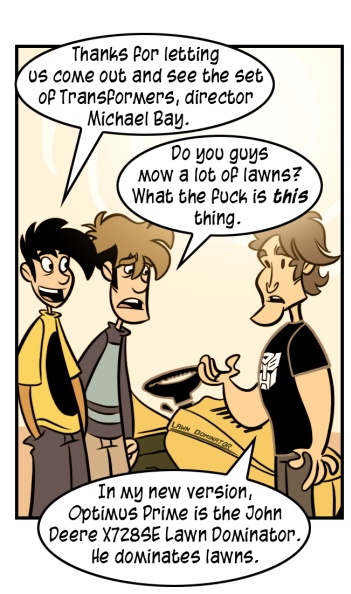 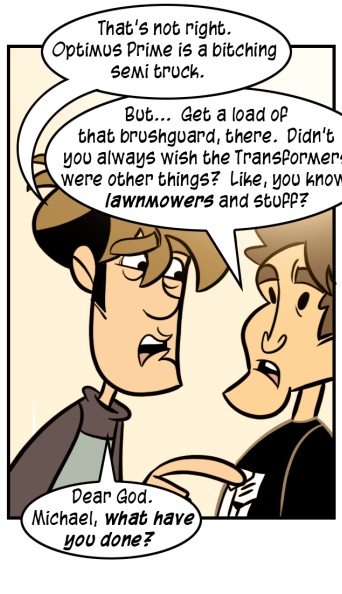 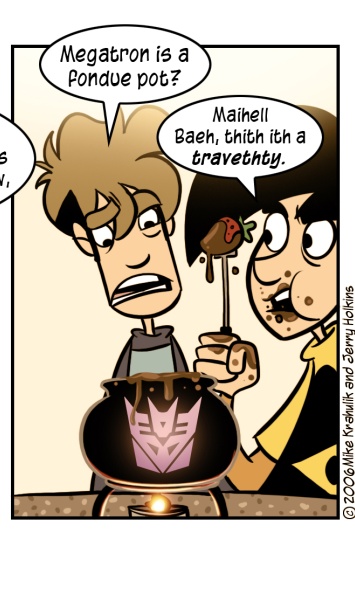 Reading over some Transformers set reports from Ain't It Cool, we began to feel concerns about the film very deeply. Not that I can actually see movies these days, my clambering heir's domination of my life being absolutely complete. But for you, dear reader. For you. We are concerned that you will not enjoy yourselves. It is this fraternal bond that makes us lash out, quick and searing, like a solar flare.

They've altered Optimus Prime in fundamental ways, and after we had completed the comic "Michael Bay's Camp" responded to some of the criticisms. Some of these are extremely interesting - particularly how fast and loose the cartoon plays with something as fundamental as physical size. There are so many variations on every Transformer that in the panoply of market tested products at least one of them probably conforms to their vision. I don't know if I can get behind the flames. But if one is to grip the demographic associated with programs like "Overhaulin'," "Monster Garage," and "American Chopper," then the Market Gods must have their sacrifice.

The eagerness to "punch up" a classic franchise never seems to restrict itself to pure necessity. This is why I was excited about the prospect of a Metroid movie for a total of forty-three ill-advised seconds. She will retain the gun arm - if we are lucky. But Samus Aran will - will, as sure as the sun rises in the east - be apprenticed to a fashion designer loosely based on the editor of Vogue. Over the course of two excruciating hours she will behave inexplicably and then "do the right thing," at a point very near the end.

In the last post, I described with an almost terrifying specificity the procedure that could shoehorn politicos out of the games industry. I hoped that it would amuse you, but I must say that I think my technique is not only bold but efficacious. I received a few mails regarding the "Comics Code," and I was not surprised to see them: widespread, voluntary censorship is the first thing I think of whenever a politician begins to speak about the medium. There is no doubt that advanced technology is giving developers the capacity to produce unseemly acts of startling verisimilitude. To my mind, though, we were on this course as soon as people started to say that game revenues were rivaling those of Hollywood. I'm not here to discuss the extent to which that is even true, or what precise angle the data must be viewed at to leave the reader with that impression. When I see our "leaders" take the stage, capering for effect, leaping into the air to click the heels, I must say, I hear only the subliminal message.

The message is this: "That's a nice industry you've got there." Then, a pause. "It'd be a shame if something happened to it."

how glad and happy when we meet