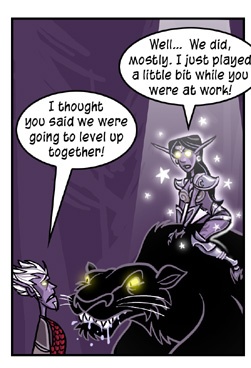 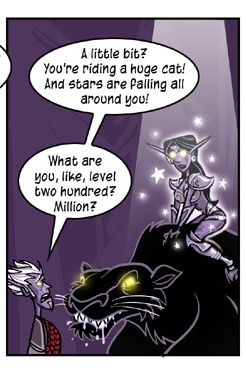 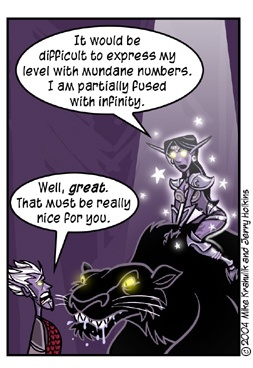 It was idle speculation when, a couple years ago, I held forth airily about some future game that could enthrall so absolutely that it would obviate all other expressions of the form. It's the sort of topic one posits when one has no pressing concerns and is interested primarily in a lengthy discussion. Certainly, no electronic experience could never be universally applied - there is a natural variance in human predilections. That's just me covering all the bases, though. I have confidence that the game I'm about to suggest has the power to grip you.

We've even done a comic about it today, which depicts the marital strife that can be generated by level disparities.

But World of Warcraft is so rich that there are almost an unlimited number of things to fight with your wife about. You could get into a fracas about the three development paths for each class. Your eyes could flash with anger while discussing the prices your partner charges at the auction house. You could seethe for months over that single raid encounter that went terribly, terribly wrong.

It's called World of Warcraft, but the addiction profile is really more along the lines of Diablo. Except that Diablo never had thousands of quests you could take in a world full of people also taking those quests, nor did every character have several professions that can create useful items out of game resources. You could certainly create guilds, they were largely social constructs and it's nothing like the 150 person extravaganza I'm in now. You certainly had powers in Diablo, but even at my current level I have so many abilities a single bar isn't sufficient. Indeed, I even have the three extra bars you get with Cosmos filled up with items that I use every play session. Every one of these buttons does something critical and I couldn't be without any of them. So envision a Diablo with every empty space filled with delicious bavarian creams.

I could write the entire post purely about how potent their aesthetic is, how each place you go is firmly distinguished from every other place, but I have a feeling this information is already well known. I could even pine for the forthcoming PVP Battlegrounds, which I imagine is less common knowledge. But sitting here writing about the game is only increasing my appetite for it, spinning and connecting what I know about the world into a cohesive character lineage. The fact of the matter is that World of Warcraft is essentially the apex of the genre, and even those who are not proponents of Massive games should try it.

When we were in Spokane, I constantly sang a song I had written about crocolisks to get me through the withdrawals. So I've got it bad.

It never really occurred to me what would happen to Penny Arcade if I stopped playing "games" in a general sense and instead focused my adult life entirely on swelling with holy power in one of them. I guess we'll find out.

another rider burned to the ground