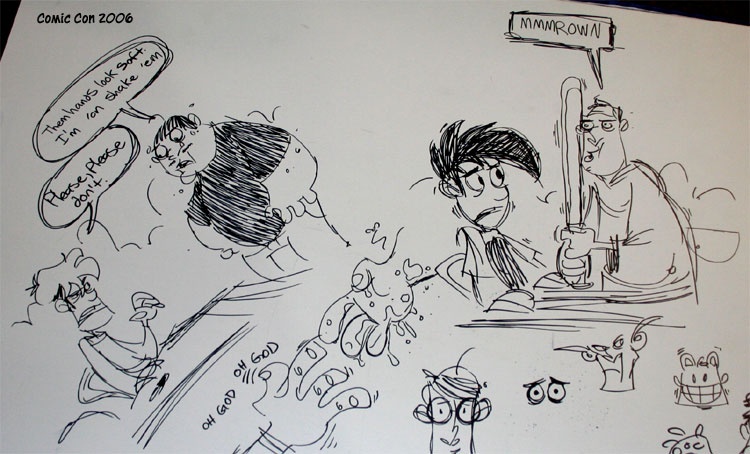 Most people aren't aware, and why would they be, but by the end of a convention our table is usually covered with sketches of various kinds. Often these sketches will include snips of dialogue (or simply just dialogue itself, on my side of the table) that sometimes becomes actual comics - it seemed like we could make that nascent product available to a wider audience. The "actual" sketch is on the upper left, the one about shaking scary hands, which is sort of an occupational hazard I suppose. Other weird ideas (such as Punisher Guy at the bottom and "George Lucas as an Ewok" in the lower left) are not included in their entirety. Simply know that it is sketches, sketches everywhere that the table is not covered by glossies for startlingly good webcomics or some crude instrument of our retail operation.

Four years, the amount of time we've been coming to the San Diego Comic Con, is enough time to see people really change. We've seen people start out as a game master for an MMO - despite the term "master," nothing about this position describes an authentic dominion - and now they're a part of one of the most high profile developers in the world, dropping a PS3 launch title. Young men enthusiastic about the medium for the duration of our acquaintance have, this year, launched their own web project. Watching people grow up is strange. The amount of time this process has taken feels like the amount of time it takes to unwrap a Tootsie-Pop. I assume this amount of time has passed for me, but that's a purely rational assertion. It has no intuitive framework, I don't really understand it.

I'm not sure how familiar you are with Goats - which is a sentence that could end in really a variety of ways. I'm referring not to the creature but to the online web interstrip, which cordons off a significant number of the possibilities. He has a "character" named Alfred in there, but I must stress the extent to which Alfred is a real person. He operates the hotel bar where the Dumbrella Cats tend to stay during the convention, a bar you might miss altogether if you are not actively in search of it. It is, then, the sort of place you might expect doesn't actually exist, and for most people, it doesn't.

In this odd, one-room, quantum bar there is a grand piano operated by a woman who is more than acquainted with its use. This Gilded Age pocket dimension is serviced by Swiss bartender Alfred, a world class raconteur with a "shocking grasp" of whisky lore and an unbelievable, possibly supernatural ability to make a person feel welcome. Not too welcome, no - he is not unctuous, and one never forgets whose house one is in. People simply appear there - Lore Sjoberg, even Scott McCloud. In this realm beyond time, Scott McCloud and I are friends and always have been. We have some memory of a place where we once spoke in anger, but we cannot recall the name of it.