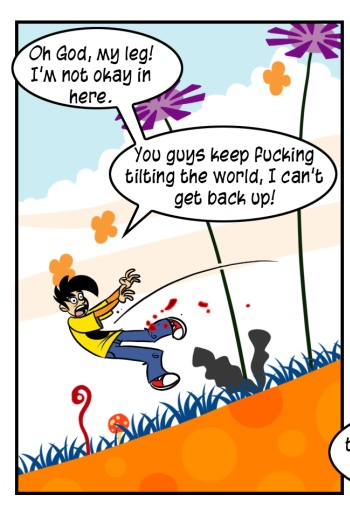 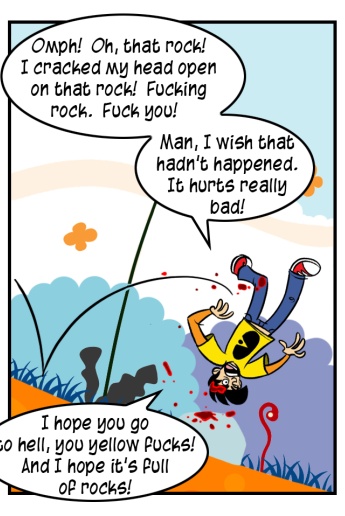 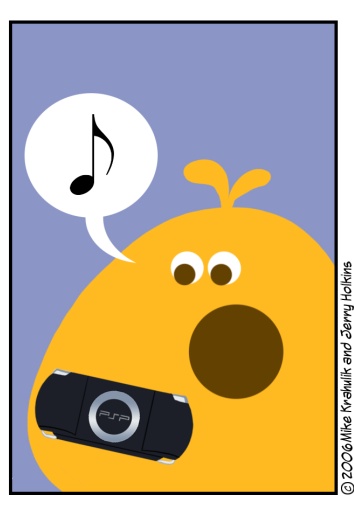 Grabbed an import copy of Loco Roco, and - after searching for almost twenty minutes to find my Playstation Portable's disused charger - sank then into the strange scenery which spun from the UMD.

Now, there are times when a brother wants to see an English menu. But as I have expressed in the past, I actually like to wade hip-deep in Japan's skittering sigils. As a result, I don't know if the yellow munchkins you assist in the game are called Locos, Loco Rocos, Roccocolos, or if they are even crazy, or what. I know that they are kind, and also that they are sonorous. Certainly, they manage their lot with equanimity, while distant gods tilt their world and jolt them with dark lightning. I do not know that we would accept such a scenario with an even keel.

I'm enamored of these beings thus far, their plight is resonant, but it's early yet. Before Gamespot deleted their review, they seemed to think the game rated a seven point seven - a score their system deems "fragrant." I honestly don't know what that could possibly mean in this context. If I didn't know better, I would say they were reviewing games with the wrong organs.  Loco Roco comes out in the States in a month or so, which contraindicates importing it. But if I don't do something ridiculous each and every day, I start to itch.

I allow myself recurring online fees of twenty dollars per month, just because I think it's an area I can get into a lot of trouble. Five dollars a month goes to maintaining the Epic Legends of The Hierarchs, The Elemenstor Saga Wiki - the official repository of all knowledge concerning my thirteen novella cycle.

I just cancelled my City of Villains account, not because they haven't tried to make it worth my while but because I just haven't been playing it enough to warrant it. Within ten minutes I had signed up for Gametap, because the deal finally got sweet enough for me to bite. Does everyone know what Gametap is? They've certainly spent enough money trying to tell you - I would love to hear about your bunker sometime, at least, those portions of it that aren't classified. Gametap is sort of gaming archivist's service, in that it collects tons of games from various eras and puts them up for emulation on your PC in a single, elaborate interface. So where you once hunted for ROMs or whatnot, here is a buffet-style service where for a monthly fee you can "eat" all the games you want. It was interesting, but I did not need it. Not by its lonesome, anyway. I like Pac-Man or whatever, but... You know. It's Pac-Man.

It was Sam and Max that finally pushed me over the edge. By Sam and Max, of course, I mean Sam and Max. Telltale Games has resurrected the franchise against all odds, with a team of rogue Lucasarts employees turning the knobs and monitoring the gauges on their illicit Game Making Apparatus. Steve Purcell - by which I mean (ahem) Steve Purcell, gets a look at everything that goes through. I picture him as sitting atop the game, pensively, in a man-sized roost. He also contributes a pretty great webcomic to go alongside, which you can find here. Hover over a panel with your mouse to extract its juice.

In all likelihood, I would have fallen prey to the service anyhow, because of Uru Live. Yes, that's true, a game that only I am interested in among all the gamers of the Earth. A constantly updated, multiplayer puzzle universe with an ongoing story and actors who play the NPCs. I have what you might call a Myst guild, consisting of myself (The T to the B, Tycho Brahe), Porkfry, and Doug, whose name cycles between D-real, Vitamin D, and Faustus, none of which ever really stuck. Doug is rational, I am intuitive, and Porkfry gets bursts of insight into logical systems that flash so hot he shakes when they take him. To say that we merely dismantled the original Uru, Myst IV, and Myst V is to be kind. In actual fact we consumed them utterly - placing your own copy of the game in the tray today, you may find that it is completely blank. We not only defeated the game itself, but every instance of it, everywhere, forever.

I would never in a million years have imagined a scenario where a company believed in Cyan's beautiful, fragile universe enough to build it back brick by brick. I even eulogized it, when the sad news arrived. The distance between us makes it impossible to see. But I have produced a handkerchief from my pocket, initials B.H., and I have just daubed the corner of my left eye.

behold, there is benevolence