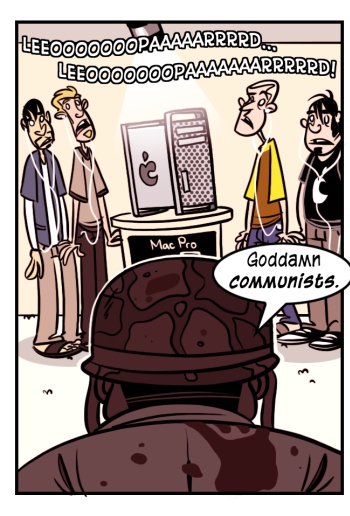 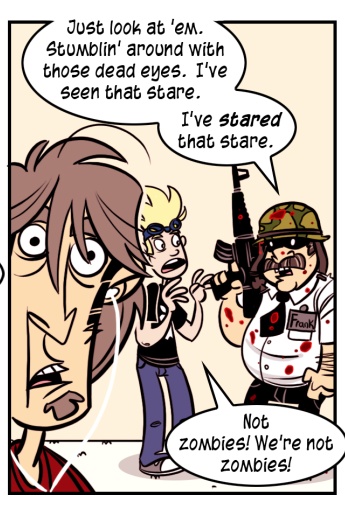 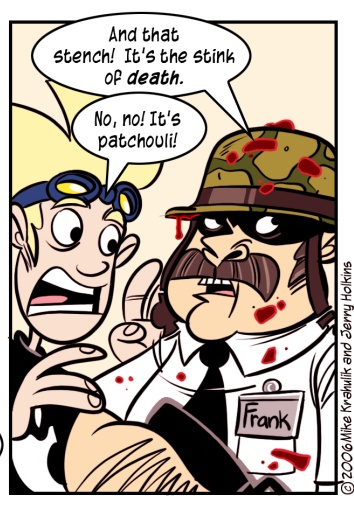 Penny Arcade Armadeaddon continues - into territory more horrifying than you could possibly imagine.

Because trying to play through a Dead Rising and The Outfit (co-op) simultaneously apparently wasn't ambitious enough, I decided to make it out-and-out impossible by placing Chromehounds, jenga-like, upon the teetering stack. I know I'm late, late, late on this one, but if you knew the shit I've been working on, you might forgive me.

After getting a sense from early reviews that there was something genuinely foul about the game, I felt content without it - I looked out the window, chin cupped in my hands, wondering what dark purpose I could put that sixty dollars toward. Reading the 1up review (and then, shortly thereafter, Greg Kasavin's review at Gamespot) made me wonder had happened, precisely, in the all the other reviews I had read - until I realized that I was simply seeing the entire scale being put to its intended purpose. I had forgotten, I think, that the scale as designed actually ranges from one to ten, and that opinions can diverge more that the customary five percent.

It's not really clear initially, I didn't pick up on it at any rate, but Chromehounds is best thought of as an online-only affair - like a Battlefield, or a Tribes, except that the online portion takes place on a dynamic, intimidating online map that three player "countries" strive to control. It includes a single player campaign, more accurately called a Training Mode, where you can get a feel for the different roles you'll be asked to perform as well as unlock robot parts based on your performance.

As for robot parts, and this is probably the most robust part of the game, the equipment you get is based on your performance in training (which I've mentioned), items you win in the in-game lottery, or which country you ally with in the persistent online war. You purchase new parts online with the spoils from successful missions, and the parts available are determined to a certain extent by what your nation researches(!!!), though I understand that wars are often over so quickly a lot of the advanced stuff doesn't appear. Next time you're in an EB, flip through the Prima guide real quick to see just how much of the game's content payload is only available online. And once you get these parts, haul them into the garage like a rustling box of Lego and start stacking them up. There are so many "nodes" per part for deadly toys to be attached to that I think it's a legitimate venue for creativity - the default machines one sees in screenshots don't communicate this.

Like I said, late - and had the scoring on the game not been so distributed, I might never have made the plunge for myself. I'm just getting into it, so while I'm intrigued by some of the heavily obscured potential of the game please don't pick it up on my say so. I need some time to stock up more equipment and run my hand along the smooth contours of its humming mech generator before I'd be comfortable offering an authentic verdict. I was just wondering what kind of game it was that could reinstate the lowest part of the ratings system, and I am starting to understand why: it presents a few big ideas, and the degree to which you'll think it succeeds seems to be connected to how much you're willing to overlook.  People hate failed potential an order of magnitude more than they hate mediocrity.

May Not Be Spelled Correctly