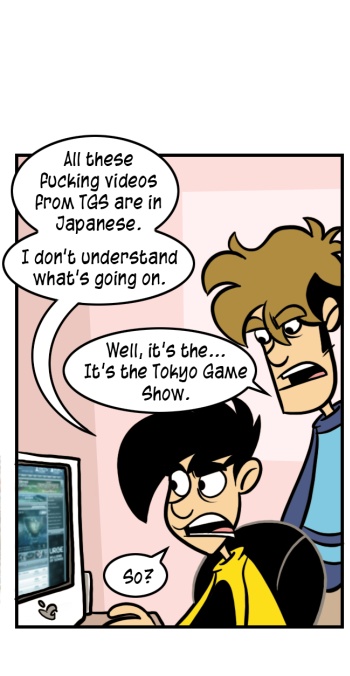 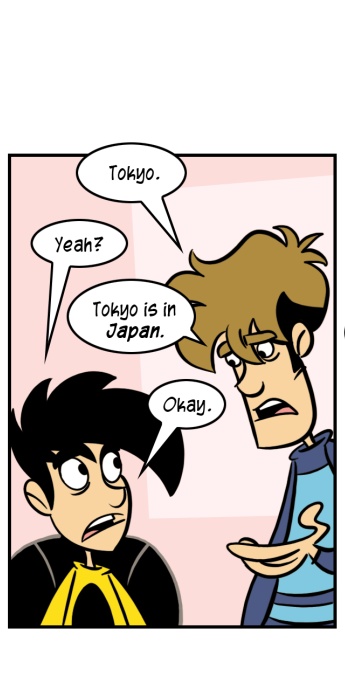 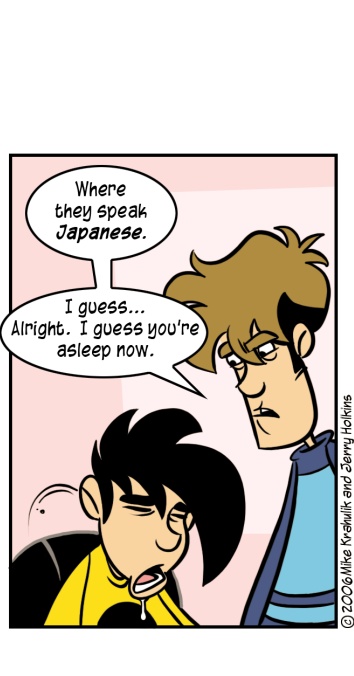 Otherwise engaged on Wednesday, Tokyo had a head start on us - its powerful newsings daring to accrue, even as we were being sodomized at the border crossing. Much of this content was indecipherable. But we can still point and shriek, like when a monolith descends.

Some of Microsoft's "Bringing it Home" content on Marketplace was shit I had already brought home, in some cases weeks ago, on the PC. I'm hoping that they're saving some of their big announcements for their X06 event, for nations that are perhaps a little more receptive to their advances. Not that some companies aren't taking them up on the proposition: the videos coming out of TGS for 360 exclusive content (for us, Trusty Bell and Lost Odyssey in particular) are more heartening than I expected, to be honest. There are certain genres that I never really expected would be represented on the hardware in great numbers, and I was resigned to it.

I'm anticipating the PS3's counterattack today with some enthusiasm. I'm not looking for huge revelations, but I hope they understand that an authentic dialogue on their online capabilities is overdue. The war of corporate rhetoric aside, the proposition to my mind is very much like it was in days of yore, when consumers were being told at launch that this machine would have Metal Gear Solid and Final Fantasy at some point in the enigmatic future, and then the consumer would paw the ground and snort, and when they ran at the offered product the matador's cape would be swirled out of reach. This show will let us know if what they're offering us - at this juncture, what we might call the now - is a necessity.

Will attempt to get ahold of Okami today, if it is physically possible for us to do so. I played it at E3 two years ago, when it was already awesome, so I can't even imagine what they've been doing since then. Ground effects? Rims? We will soon see.

The most recent E3 showed me that Gears of War, Bioshock, and John Woo's Stranglehold were - all three of them - absolutely necessary to my continued health and happiness. I feel as though the advertising budgets driving Gears are such that we needn't really invest our limited time in a discussion of it. And Stranglehold, well, aside from rumors that John Woo is more involved than I expected, watching this video should probably get you and I on the same page. Max Payne is in there, yes, but Max Payne did his thing in environments that, beyond the occasional particle, didn't really seem to care. Chow Yun Fat apparently demands greater respect from his immediate surroundings.

Bioshock, I will admit, has been a tremendous challenge for me. You can see that it has now been almost four months since I saw it, and I have apparently been unable to describe what happened. I'm glad I'll never have to: IGN has secured, in video form, the entire presentation we were given at the show. I can't really pretend to be objective about Irrational Games, which I suppose makes sense lexically. If the thought of exploring a disintegrating subaquatic dystopia doesn't keep you up all night sometimes, then I don't know if we could ever really be friends.

that is the question