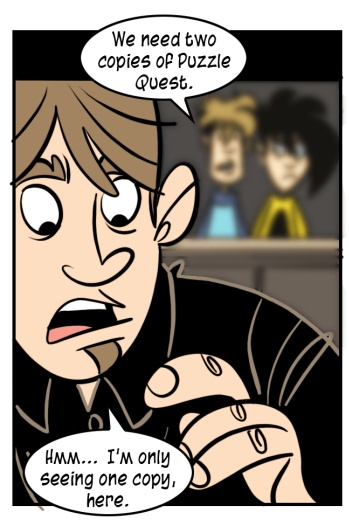 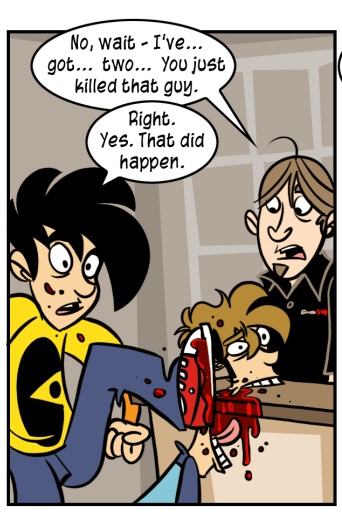 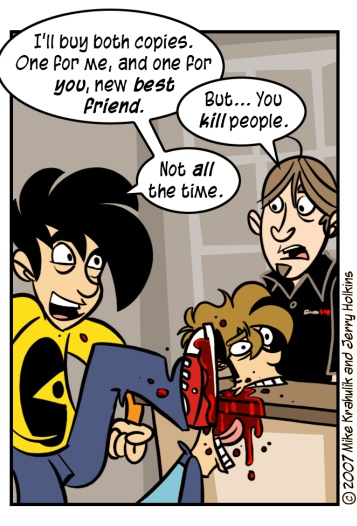 I've been having a hell of a time finding a copy of Puzzle Quest anywhere, which only adds to my garment-rending grief about the lack of a true PC version. I'll find it eventually, but I think I might avoid the PSP version, at least for now. I had intended to do so for purely ergonomic reasons, believing a stylus was probably the ordained interface methodology, but there is a bug that negates companion bonuses on the Playstation portable that I am keen to avoid.  I was worried about crowded screens full of text wrestling for space on the DS, but Gabriel says that they've experienced no ill-effects. I understand that he brought it home to Kara, suggesting that it was essentially a Bejeweled RPG, and now the two of them have hunched over those two screens every night since he bought it.

Neither portable version includes genuine Internet play, a strike against both. A Live Arcade (or EDI, Wii Shopping Channel) version would strike the right balance, but currently there's no such thing. Puzzle battle games are a particular fetish of mine, so it may be that this pierces me more deeply than most. I have a... "unique style of play" that will likely exhaust local battle prospects within a very short period of time.

Infinite has another project en route entitled "Galactrix," though - one that is intended for the vast PC platform, to be ported to the rest later. Adopting a sci-fi theme, it looks to build on a lot of the ideas in Puzzle Quest.

Wii owners hungry for an impetus to power on the device won't have much longer to wait - Super Paper Mario is lurking around the beginning of April, and I have already begun to orient my life around its release. I went back to the kiosk three times to play it at GDC, in outlandish disguises so I would not be turned away. I knew that I liked the the look, but I didn't know if the name was just branding - if it was actually correlated with the Paper Mario franchise at all. It is, but the RPG elements are dialed way back - it's much more a traditional platformer. Traditional might not be the right word. It may seem strange, but I want you to see what I mean for yourself if you haven't already. It's a hyper-D flatformer RPG + familiars.

I think I got it all.

the way you want him to