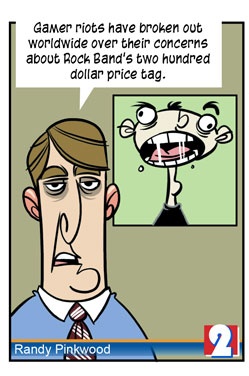 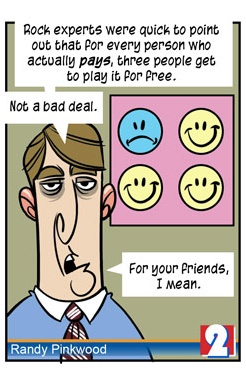 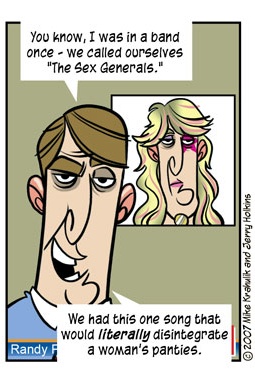 The aggregate price for all Rock Band peripherals was originally three hundred dollars, going by the vague entries in the Gamespot database, but those strange figures are really the chicken entrails of the gaming industry - its powers of prophecy are somewhat in question.

A spy emerged from a consumer focus test, revealing that Harmonix is considering a hundred and fifty to two hundred dollar price tag for the software, one guitar, a microphone, and the fanciful drum apparatus. People seemed to like this better, but only marginally so - the way one might prefer to be stabbed than shot. Optimally, one isn't stabbed or shot. Optimally, one eats some cake!  But there are times when cake is not available, and instead we are destroyed.  This is the deep poetry of the universe.

If they continue down this road, sampling our appetite for the product divided by the price we are willing to pay, they will eventually find the magic number:  It comes out to two dollars and forty-seven cents for eighteen guitars, ten mics, and eighty simulated drum sets. The software (in this calculation) is free.

Any time people start quoting the "total price" you should run for the hills - specifically the Hills of Reason, where wise men hold court. This came up before when people were talking about Crystal Chronicles, and again when people were talking about Donkey Konga, and again when there was a calculation that made the 360 more expensive than the PS3, and now it is happening again. Regarding Rock Band, this rhetorical, illusory "full price" assumes that a) you are some kind of Goddamn kraken, able to play two guitars, a drumset, and sing into a microphone all by yourself, or b) that your friends are freeloading polyps who refuse to pay their fucking way.

The July issue of PC Gamer is out in stores this week, and features a fairly vast article covering On The Rain-Slick Precipice of Darkness: Episode One. There are several covers available as well, you can see them all here, and the coverdisc has an HD version of the trailer that we're calling "The Real, Actual Trailer." I have faith that it will find its way to your Online Video Parlors forthwith.