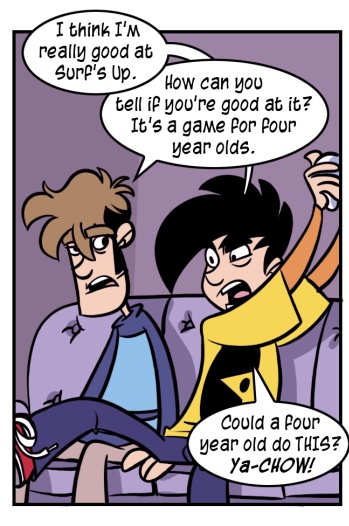 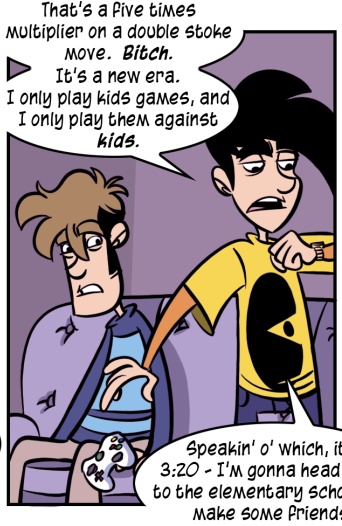 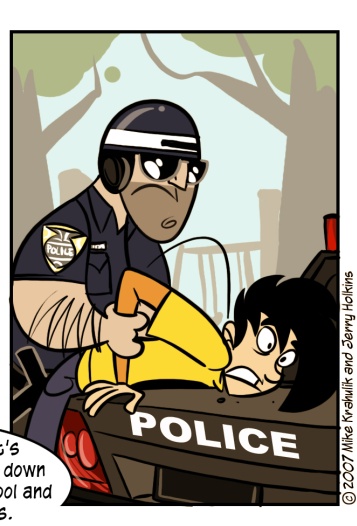 It hasn't become official policy, yet. But with Gabriel's afternoon whiled away with kids' movie tie-in title Surf's Up - followed by a raucous Pokemon Tournament that saw his Monferno victorious - well, it would be easy to come away with that impression. It's a dangerous genre, games for young people, as it's practically defined by cramped budgets and shoehorned licenses. It is also much more unassuming, much lighter fare, and doesn't delight in abusing the player as more "sophisticated" games do. I suppose that has its own appeal.

I recently went through a similar process, finding that beneath Pokemon's chirping munchkins and classic grind structure was an elemental candyland of strategic delights. I wondered to what extent my own bigotries about specific genres (or intended audiences) was actually deflecting enjoyment. To this end, I purchased Yu-Gi-Oh! Spirit Caller for the DS in an effort to unearth my inner tween. It didn't stick, but not because it was bad - it's because I could see myself reflected in the top screen, eyes wild, brow already damp with the onset of Card Fever. I understood the appeal. Indeed, I understood well it enough to eject the cartridge.

If I expect to detest or enjoy a demo, I almost always grab it - the rewards either way are simply too great. If it's as good as I hoped, or much better, I'm richly rewarded. If it's miserable, then I can preen and feel smug! It's a great system that has, thus far, delivered powerful results. I'm trying to get better about securing demos that I don't have a strong opinion about, which is to say most demos, but I was paid in full by Blacksite which has only encouraged this policy.

There's another class of demo, though, one I am afraid to download. Addiction is rarely a concern, on account of the blessedly limited content. But there are certain games that have hooks I like or ideas I find so appealing that I want them to persist in a perfect, hypothetical realm. Overlord is like this.

I downloaded the demo because I couldn't bear it anymore - I simply needed confirmation one way or the other. You have probably heard it before, but we're talking about Pikmin mingled with Dungeon Keeper - where instead of marshaling plantlings, you call to your side little devils and scour the countryside for chunks of your ruined, evil tower. Behind all this lurks character upgrades and out in front stands writing which I'm prepared to call quite good. I've been avoiding coverage on purpose, so intense was my desire, so firm the grip of fear upon my heart. If you're trying to beat Nintendo at its own game, that's a challenge; and if you're trying to write "ironic evil" dialogue and keep it fresh, you're compounding that challenge. I'll be damned if they haven't taken a good run at it.

The demo is out for both PC and 360 at this very moment, a gig or so on each, and it deserves your appraisal. The camera doesn't work the way you think it will, because the right stick classically used for this porpoise is given over to direct control of your minions. Give it time, and I suspect you will derive a joy not unlike my own.