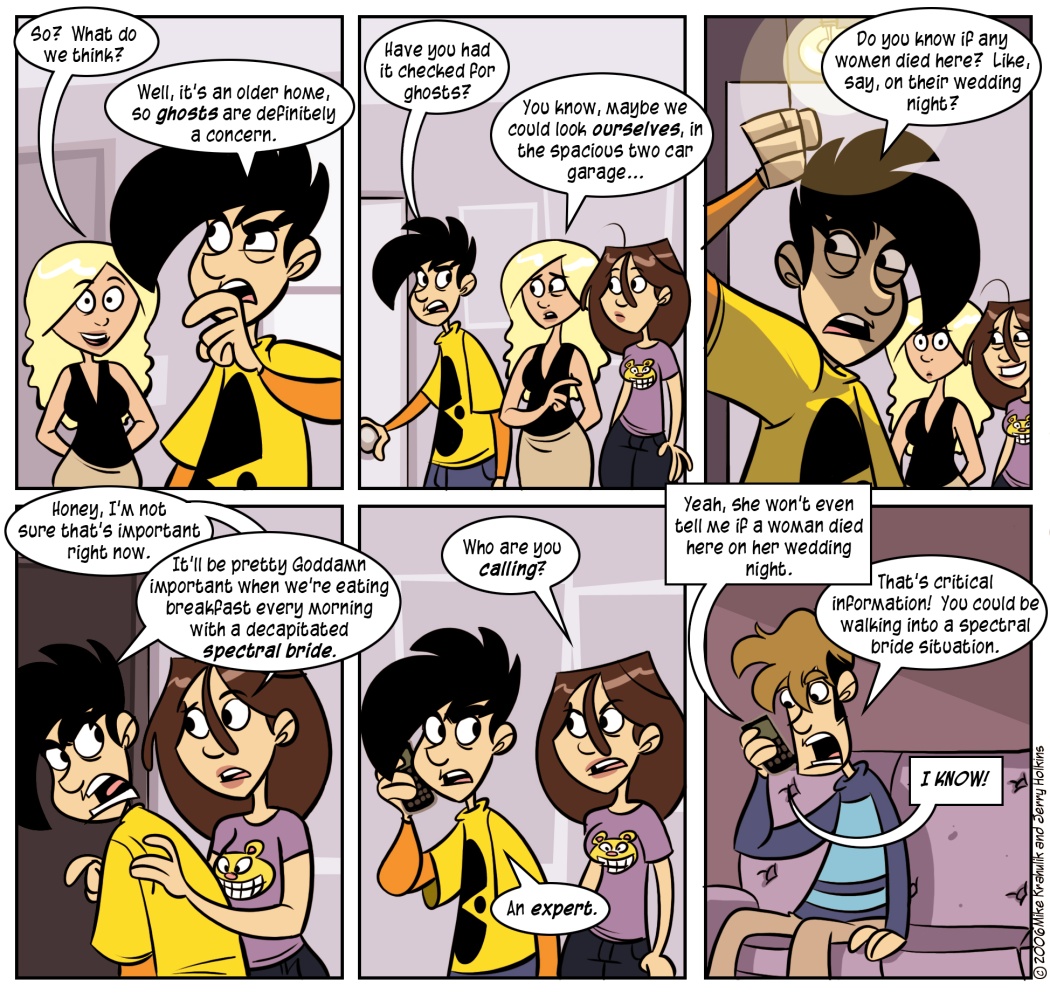 Gabriel and Kara are thinking about moving, but only one of them is approaching things with the correct amount of dread. It is almost impossible to find a home these days which is not some unholy conduit - a winking anus of evil that acts as a revolving door for hell's starveling dead. But a hollowed-out ghoul in shredded wedding gown doesn't need to be a dealbreaker. Don't let a sundered soul turn your dream home into a nightmare charnel house!

Basic research is critical. For example: if you're moving into what was once an old farmstead, it's even odds that a failed fertility ritual resulted in darkness unending for an unsuspecting bride. Where do you think those prize pumpkins come from? Here's a hint: it ain't Miracle-Gro.

Make Yourself A Vessel For Unlife. Probably don't need to explain that one; it's pretty straightforward. Sixth son of a priest, bound in silver chains, etc.

After that, you simply Perform The Forbidden Ritual. Prick your ring finger with mistletoe, and with the help of a necromancer wed the lonely spectre in blasphemous reverse marriage ceremony. It's best to perform this one during the Winter Solstice, when our realm and the next brush against one another.

Pork and I put Band of Bugs through its paces last night, surprised to find that many full-sized hours had passed while we were engaged in miniature warfare. If I may stray from the point for a moment, it is ridiculous to me that BoB - a ten dollar Live Arcade title - is the only true tactics experience on the entire platform. There is a rumbling avalanche of Real-Time Strategy titles, an embarrassment of shooters, and even (for some reason) a single game that blends fighters and shmups - but the company that holds two of the most compelling tactical tabletop licenses has largely gone without. This is weird.

I've lost track of time both nights I've played it, that is to say Band of Bugs, and I haven't even investigated the single player content. We play one of the built-in scenarios against the AI co-operatively, or scour the friends list for burly men to perform their customary service. It's hard to believe that there haven't been more tactical games with a more pronounced multiplayer component, but mechanically speaking tactics games usually have a player's entire army move and act in their phase. This doesn't make multiplayer impossible, but it makes it inconvenient, which is often the same thing for most people. With a combination of interleaved turns and relatively small armies - armies that are determined by the scenario you choose, so there is no interminable construction period - you get a tactical morsel that can actually be consumed.

It has a map editor, and if you play someone on a custom map you have the choice to save it, but there's no mechanism outside the game to distribute said maps which is a shame. I imagine that as an independent developer that sort of infrastructure simply isn't possible, but I'm curious to see how effective it is to distribute maps virally. If I'm playing mostly with my friends, my guess is not very. The base content has been really enjoyable, so it's not a huge deal yet. I've suggested that Porkfry turn his pocked, ADHD-riddled brain to the creation of maps, and I look forward to the terrifying landscapes his imbalance will surely provide.

When playing with a teammate, I do wish I could see their pointer on my turn and vice versa, so that we could more easily strategize. Also, if the level editor were made multiplayer, it could become a type of co-operative game all by itself. In addition, there's almost no documentation on how the game actually works mathematically, which isn't acceptable in a game of this type. I actually enjoy learning a game by being ground up in its implacable gears, but I don't think that's a common fetish and it certainly isn't something they want to rely on for their "accessible" strategy title. These are all things I would like to see, but none have soured me on the game. They've got a good thing here.

did you think you earned it